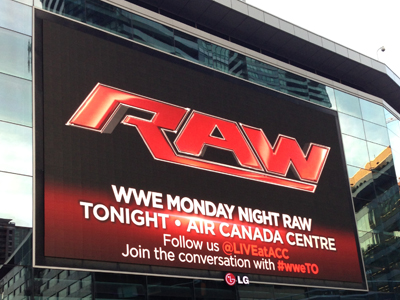 I’m a huge wrestling fan. The only television I watch is Raw on Monday nights, and Impact Wrestling on Thursday nights. The rest of the week, I am usually spending time with the girls watching their shows.

In early September, WWE Raw was in Toronto at the Air Canada Centre. Our friend Julie was kind enough to invite us to join her family at the event.

So that we didn’t get caught in the crazy rush-hour traffic, we decided to take the GO train into Toronto. The girls love taking the train. We arrived early enough to grab some dinner. After finding out RealSports was completely full, we walked over to E11even. I had never been to E11even before, and didn’t know what to expect. We sat down and looked over the menu. It wasn’t overly expensive, but more than what we would usually pay for dinner. Our waiter was fantastic… like over-the-top fantastic. Then the food arrived. Oh my… it was amazing. We all left full and content. Wendy and I both agreed that this was a pure example of “you get what you pay for”. We paid a bit extra, but it was fully worth it. An amazing experience, to say the least. Okay… back to wrestling…

We arrived at our seats. As this was a live Raw event, there was also a taping for Superstars prior to the start of Raw. The Usos over 3MB
The Usos are very over with the crowd. A well deserved win for them. Big E. Langston over Zack Ryder
A squash match, to say the least. Lauren was all cuddles as they wrapped up the Superstars taping… But then got up to watch them change the ring aprons. The Straight Edge: guest – Daniel Bryan
RAW started with hometown hero Edge coming out to interview Daniel Bryan. It was obvious he is dearly missed by the amazing pop the crowd gave him. We were all on our feet for his entrance. Of course, this brought out Triple H and Randy Orton. To get back at Edge for his comments, Triple H had the Shield take out Edge’s best friend Christian. Kofi Kingston over Curtis Axel via DQ
This had the makings of a great match, but Curtis refused to stop hammering Kofi in the corner, forcing the ref to call for the bell. Bray Wyatt over Dolph Ziggler via pinfall
Surprised Dolph was pinned cleanly in this one. The Wyatt family all congregated in the ring afterwards, with Bray dropping his key “follow the buzzards” line. Naomi, Brie Bella & Natalya over Aksana, Alicia Fox & Layla via submission
Natalia got the win with the sharpshooter. Santino Marella over Antonio Cesaro via pinfall
Santino got the surprise pin in his return, after being swung around by Cesaro for a full 30 seconds. An incredible show of strength. Damien Sandow over The Miz via pinfall
This match was interrupted by Fandango and Summer Rae, who came out on stage and danced around, distracting The Miz, allowing Sandow to get the pin. Randy Orton over Goldust via pinfall
This was hands-down the match of the night. The “you’ve still got it” chants for Golddst were well deserved. RVD vs Ryback via DQ
Ryback slammed RVD into the ring post, groin first. You could hear all the guys in the crowd moan. Daniel Bryan vs Dean Ambrose via pinfall
As usual, the Shield interfered. Randy Orton came down for the attack as well. The girls were getting pretty tired by this point… Like most Raw and Smackdown shows, after the TV part ends, they usually have a dark match just for the live crowd.

They did not disappoint.

Curtis Axel and Paul Heyman battled CM Punk to a no-contest
Curtis Axel took a beating at the hands of CM Punk, while Heyman watched from the ramp. It was nice not to get caught in a long line leaving a busy parking lot, or having to drive home. Taking the train was a great decision, as it allowed us to rest all the way back to Oakville. Wendy and the girls slept most of the way. I couldn’t. I felt like a kid again… like when my Dad took me to see my first live wrestling event back in 1985 at the CNE Grandstand. It was a great night! Thank you to Julie for inviting us.

Moving To Toronto? Things You Should Do In Your 1st Week.