The Top 11 Things to Experience in New Orleans, Louisiana 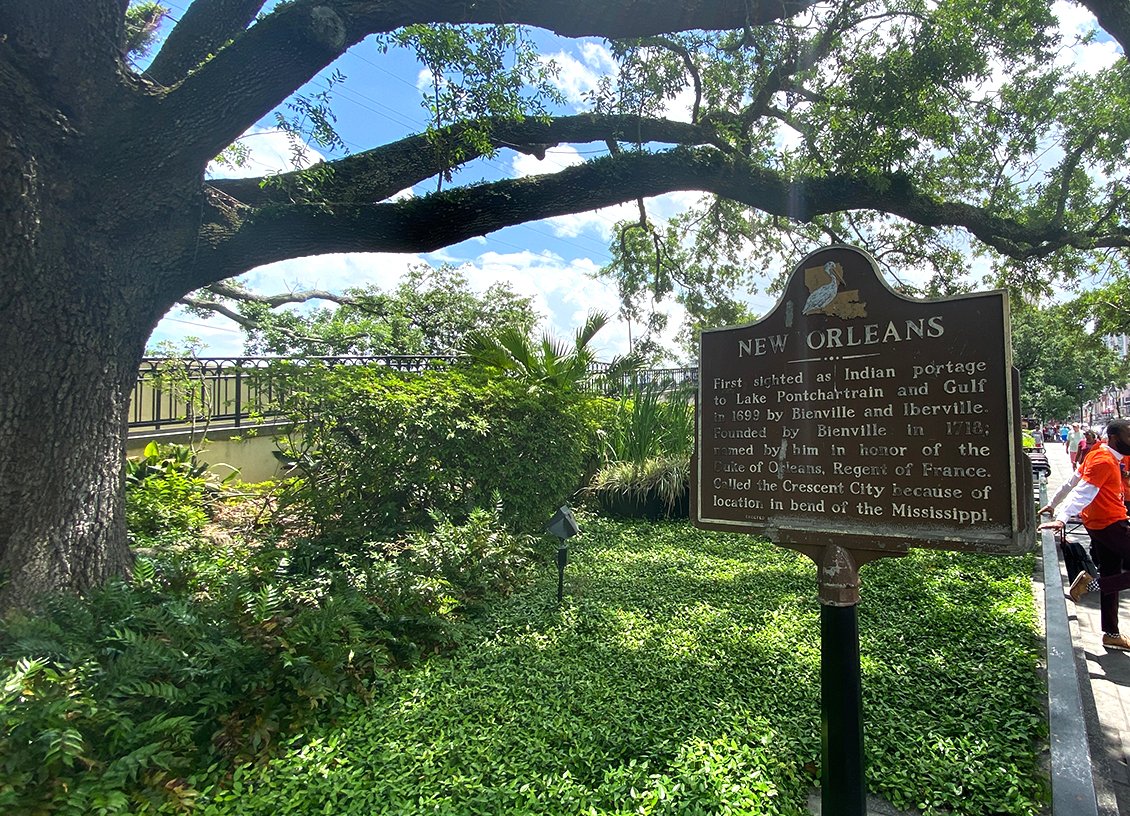 The Big Easy is an absolute must addition to any bucket list. To say that it is a quintessential southern city might be true, but that doesn’t really explain why you have to visit. That’s because the city defies definition and categorization. There are so many cliches about New Orleans – all of them probably true. It is a living cliche in many ways. But it’s way more than that.

There are thousands of things to do in New Orleans, so one person can’t possibly do them all in one visit.

Here are my top 11 Things to Experience in New Orleans, Louisiana. 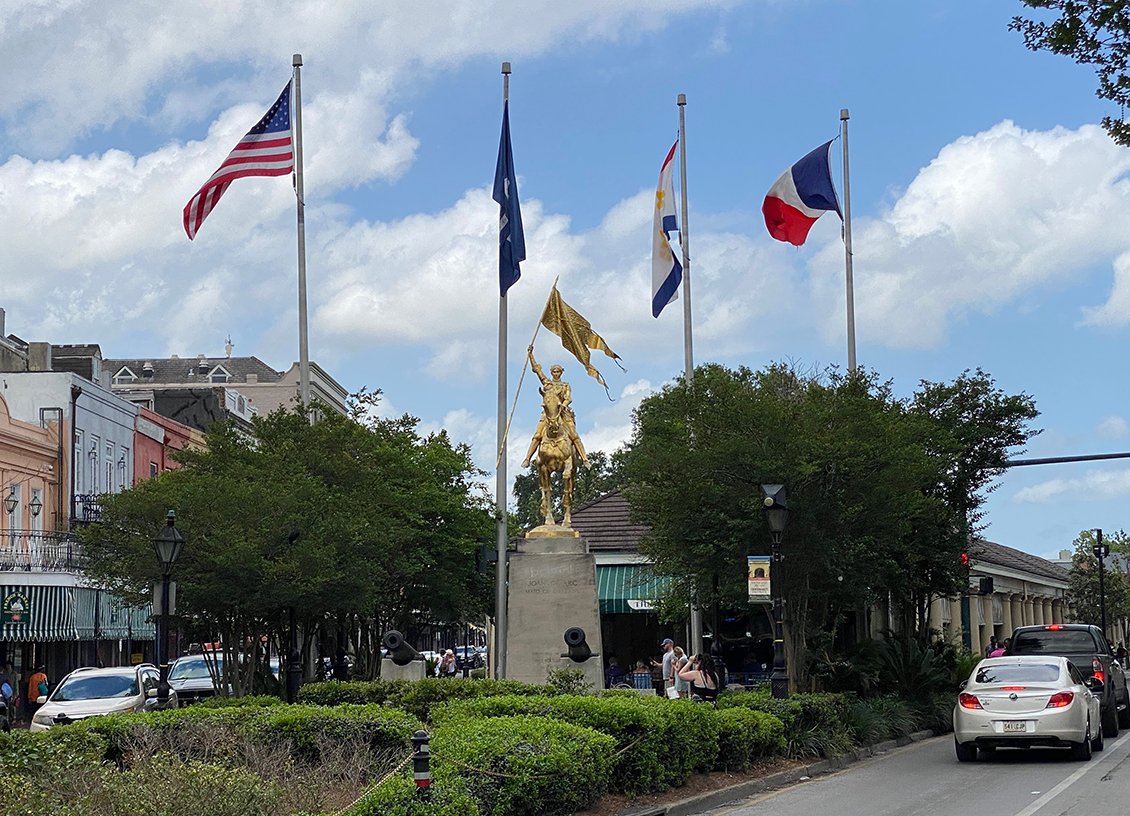 You haven’t really been to New Orleans if you don’t visit the French Quarter, the heart of the old city. Yeah, it’s pretty touristy, crawling with other tourists just like you, but there’s a reason for that: the place is awesome! 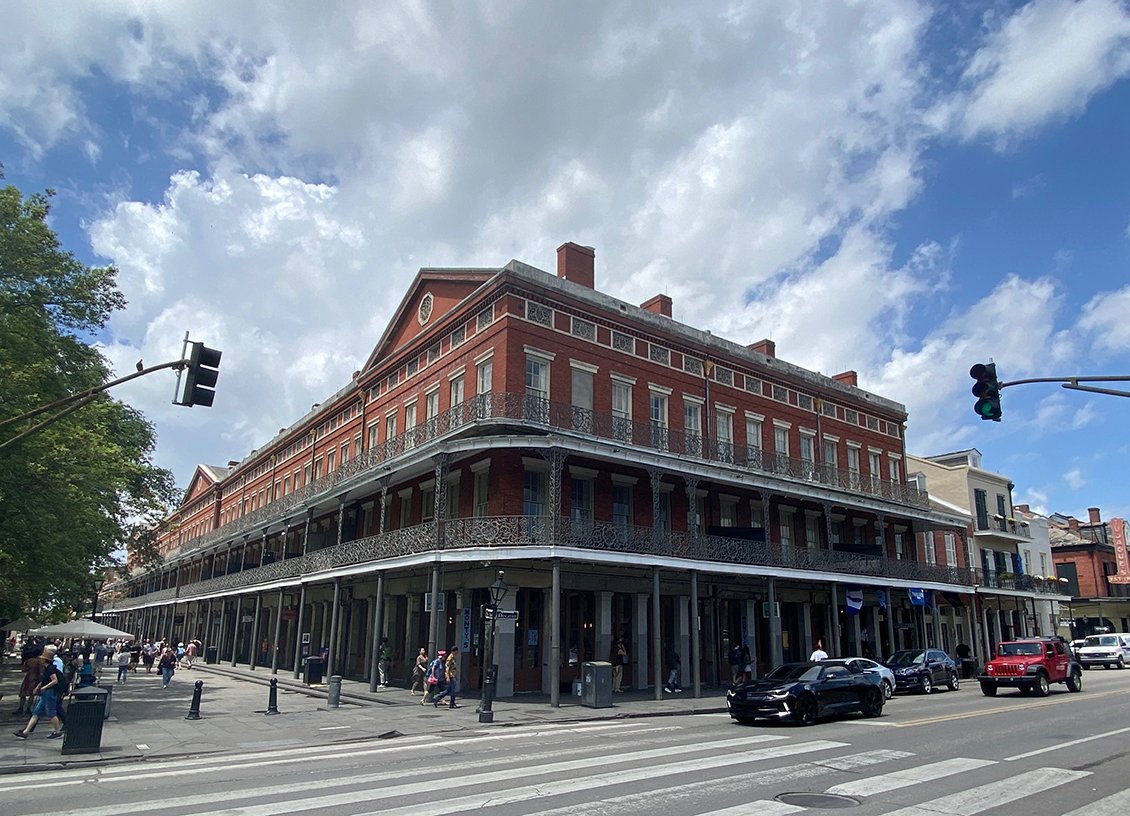 It retains all of its historical charm. Old buildings, the balconies draped with ferns and flowers, the narrow alleyways and hidden courtyards you only get a glimpse of if you are invited in, and there’s music everywhere. I mean everywhere!

There are times when there might be a different musical act on all four corners of Jackson Square at the same time! And the music never really stops, continuing through the night. 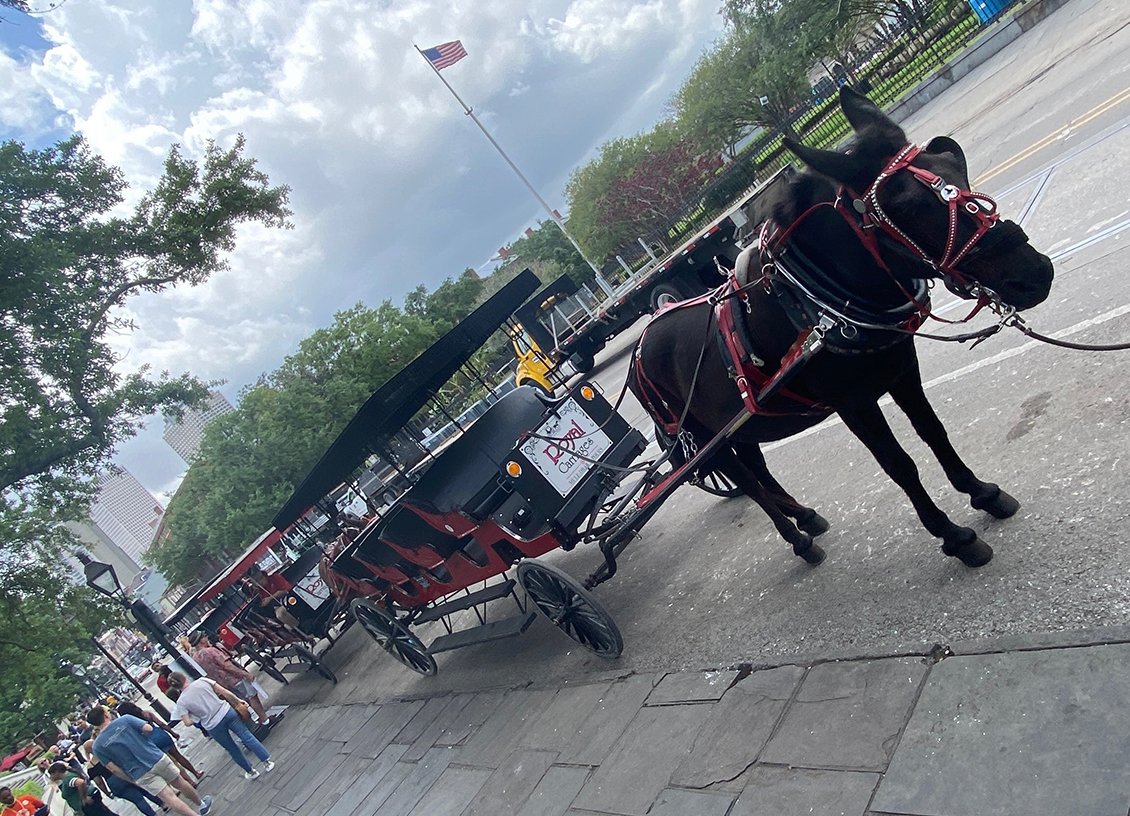 Consider a horse and buggy tour or a hop-on hop-off sightseeing bus tour around the French Quarter. You can catch one just outside Café Du Monde.

The French Quarter is located in the heart of Downtown New Orleans, right on the Mississippi River. 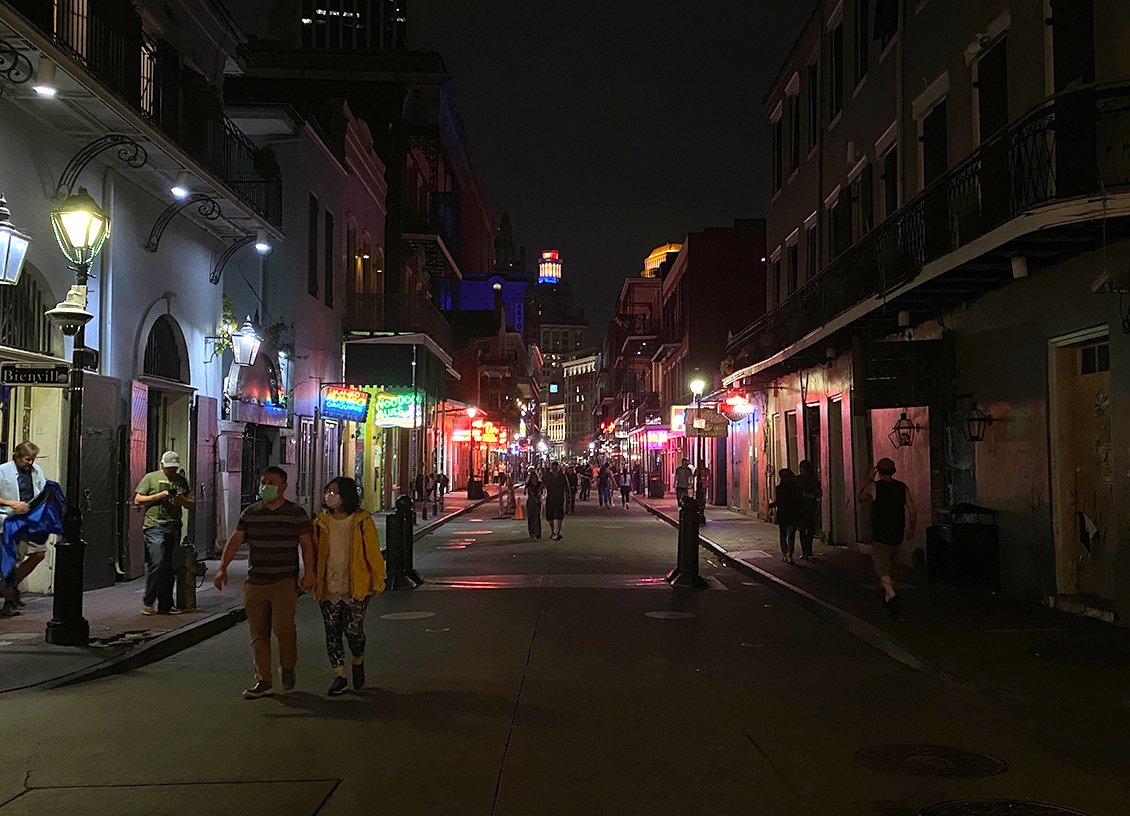 The heart of New Orleans’ music and nightlife is the infamous Bourbon Street corridor. Yeah, it’s awash with the sounds and smells that’ll remind you of your college years, but you can’t say you visited New Orleans without at least one trip down this street, just to take in the party vibe. And it is a party, my friends. With all that entails. Especially at night. Music blares from every open door, and there are even musicians performing in the streets. 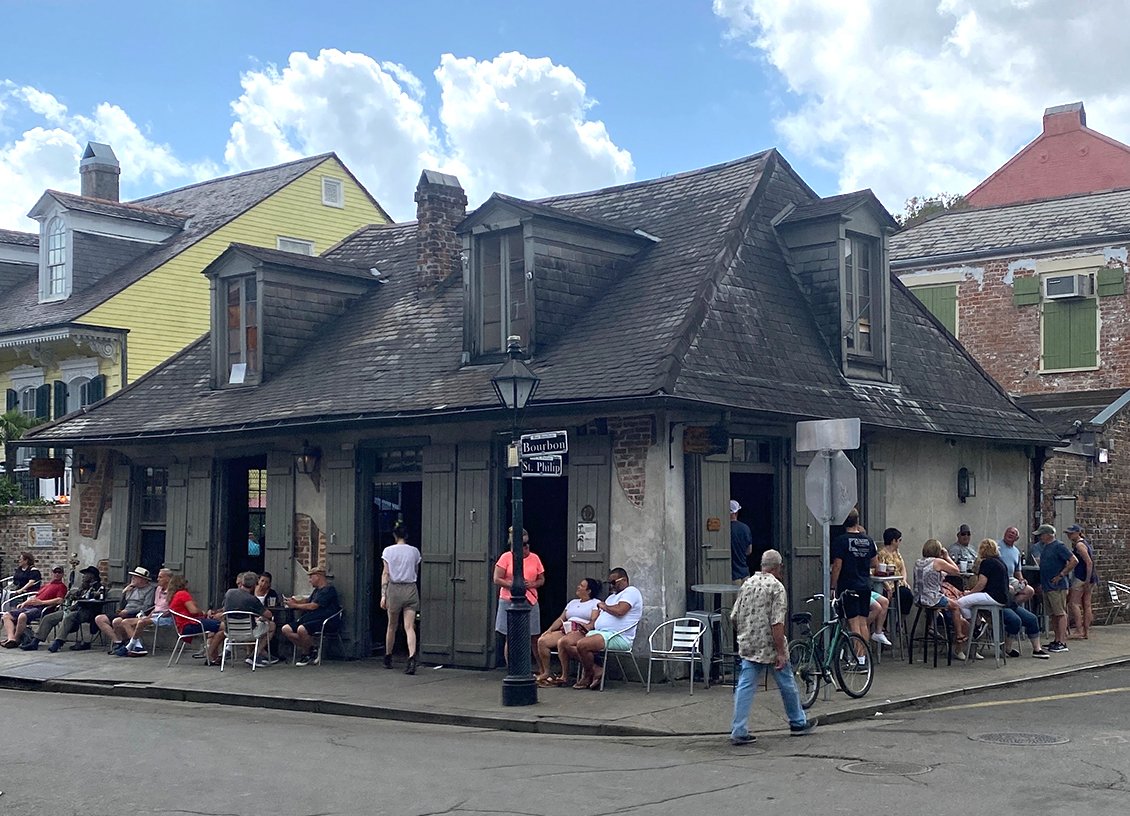 I would suggest checking out Lafitte’s Blacksmith Bar, which claims to be the oldest bar in the country. And it might just be. You can catch live piano music in the backroom, and feel like a real-life pirate (it’s named after one, after all), while you sip on their infamous Hurricane. Take it easy with it though… it’s very refreshing, but pretty strong. 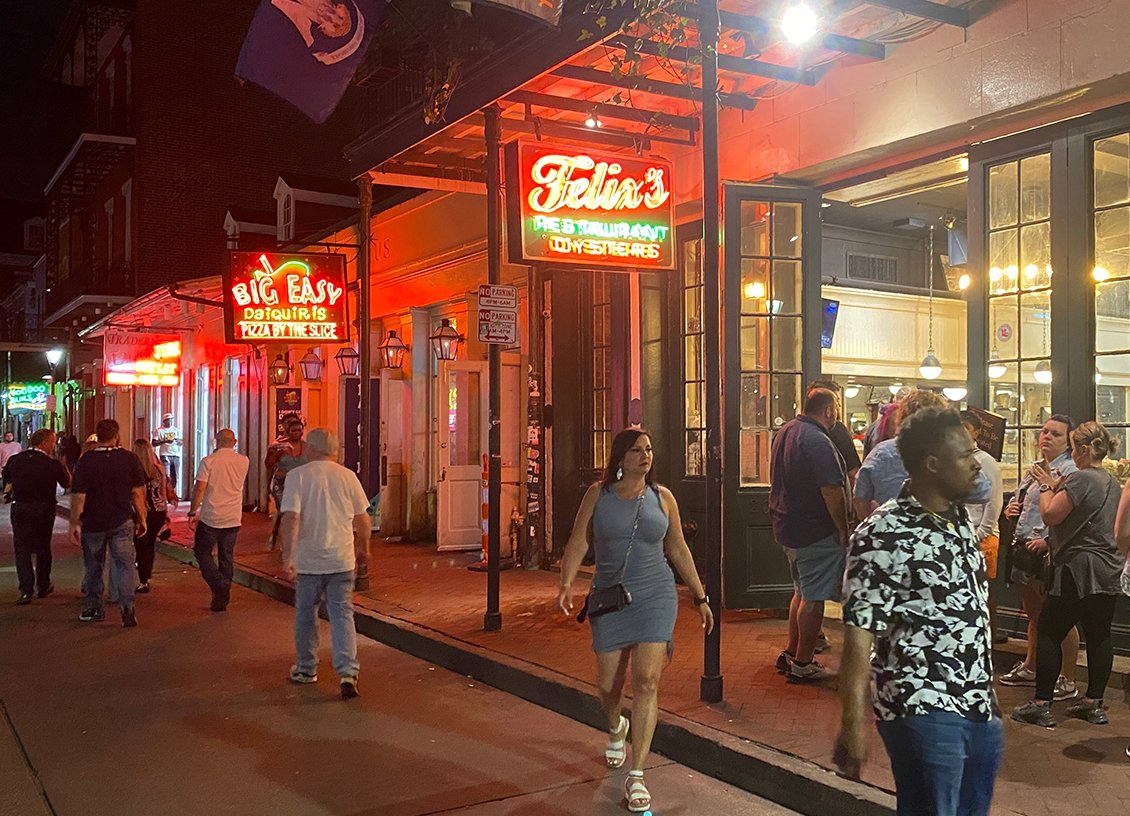 There are so many great live music venues to check out on Bourbon Street. You can visit 5 venues every night for a week and still not tap into the amazing selection there is to offer anyone looking for a great time. 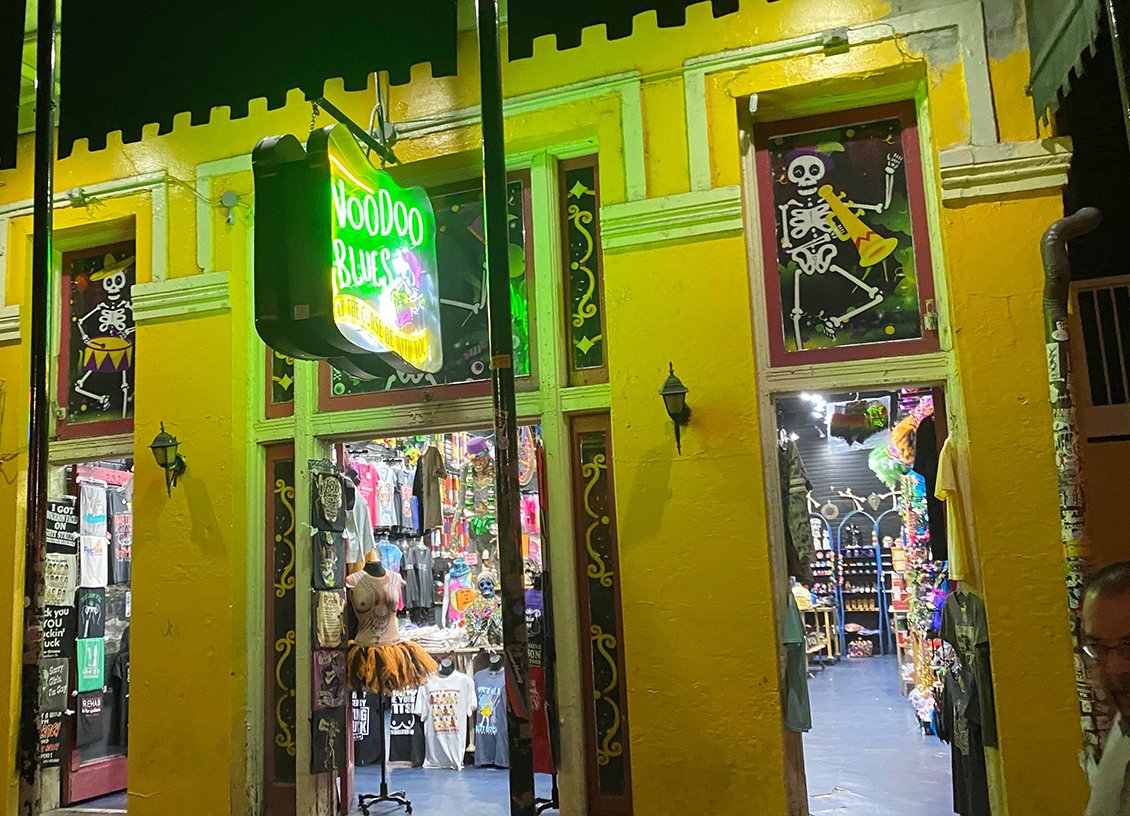 And just walking down the street is an experience in itself. People watching, gazing into bars, grabbing a slice of pizza, or visiting one of the multiple souvenir shops… you’ll be entertained for hours! 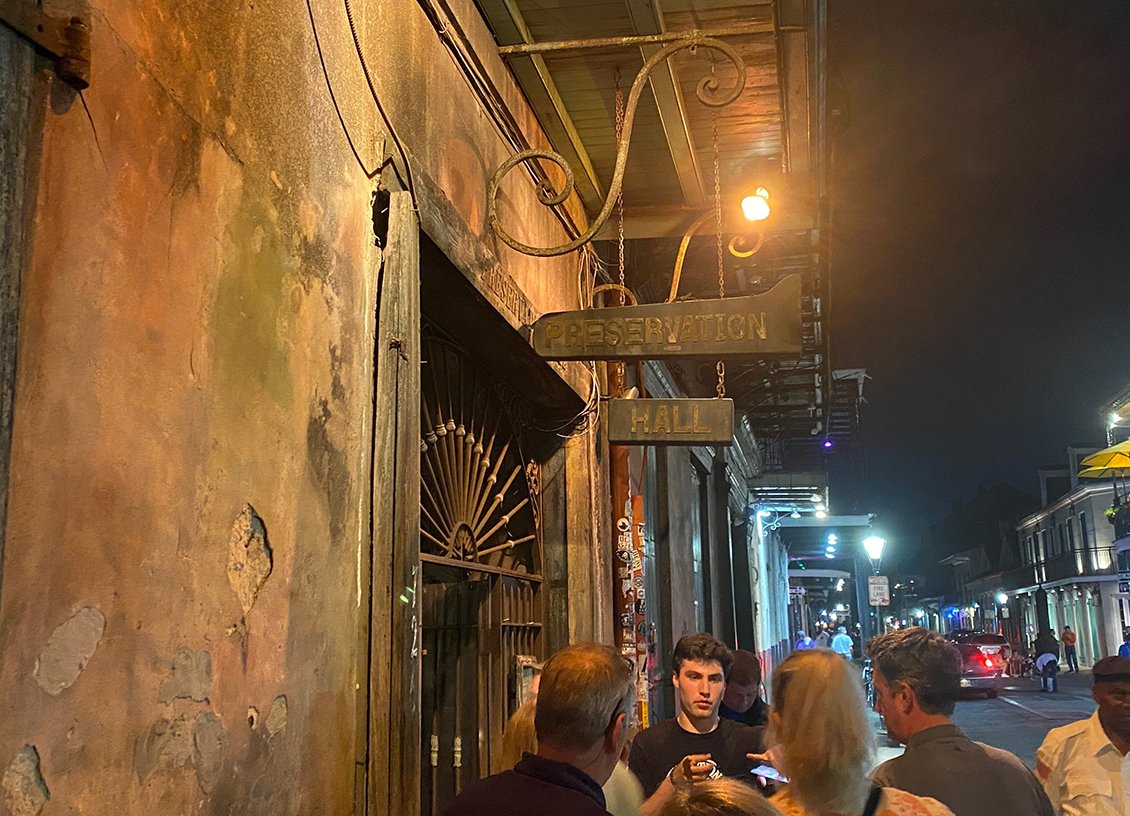 When you get to the Quarter, one thing you have to do is catch a show at Preservation Hall, the home of jazz. It’s an affordable and intimate jazz show that will have you clapping and singing along.

If you have seat tickets, you’ll sit on a bench where they tell ya to sit, and love it. You can pay a little extra to get front-row seats. There is also standing room on the sides. There are no frills in the Hall, just kick-ass jazz.

The place sprang up in the 1960s when Rock n’ Roll was sweeping the land and jazz was taking a back seat. In order to preserve their unique culture, a truly American art form, Preservation Hall was formed.

We saw Preservation Brass, the resident brass jazz band. It’s a combination of some of the best brass players in the city, led by singer and trumpeter Mark Braud. You just can’t get better live musical entertainment than this! 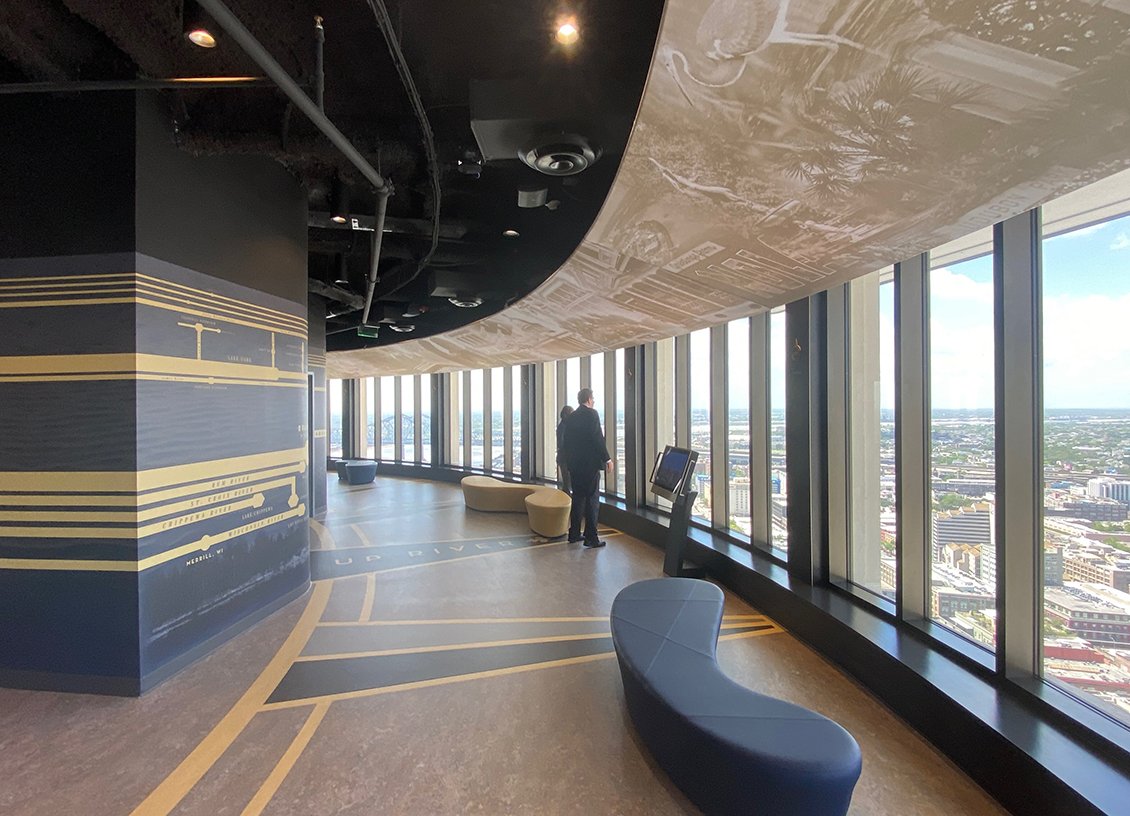 Vue Orleans is a brand new attraction, located in the new Four Seasons Hotel. You can get an amazing 360º view of The Big Easy from 34 floors up! There’s even a presentation in the elevator on the way up.

You can get a great view looking up Canal Street from the observation deck. 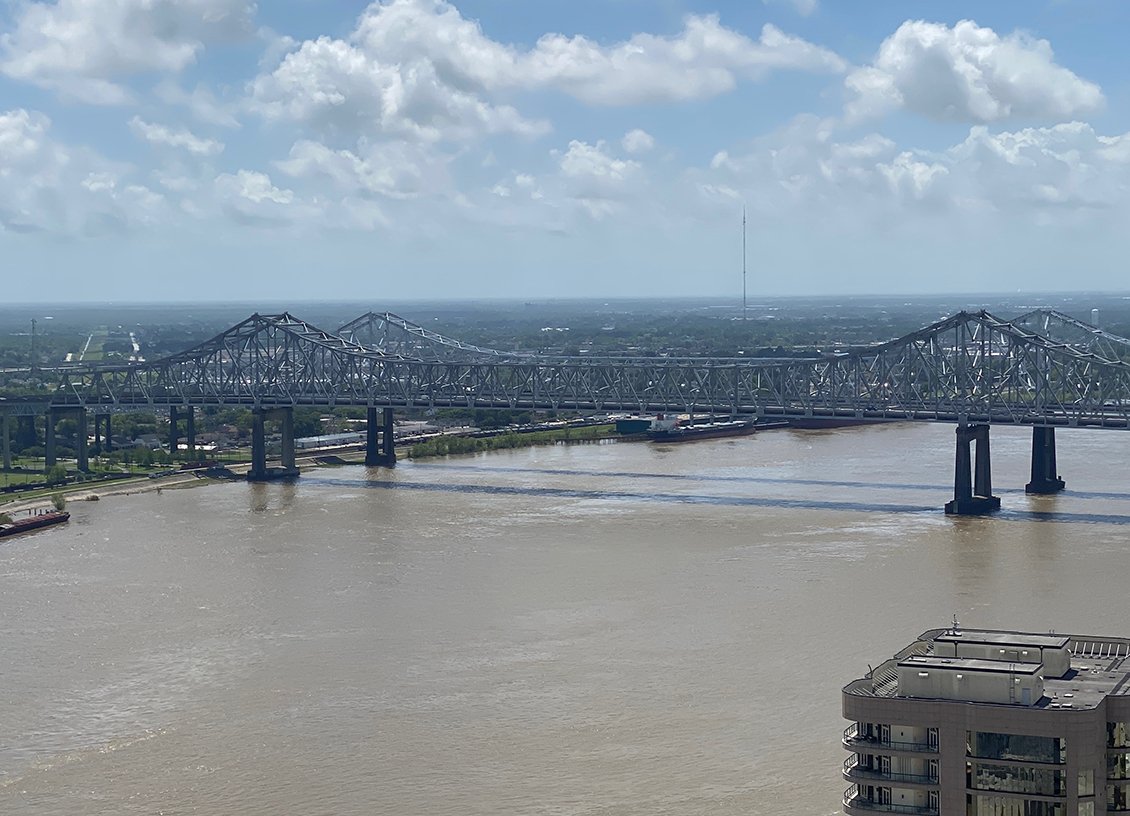 It’s like a skyscraping museum! With exhibits on everything the city has to offer: history, music, food, and culture. 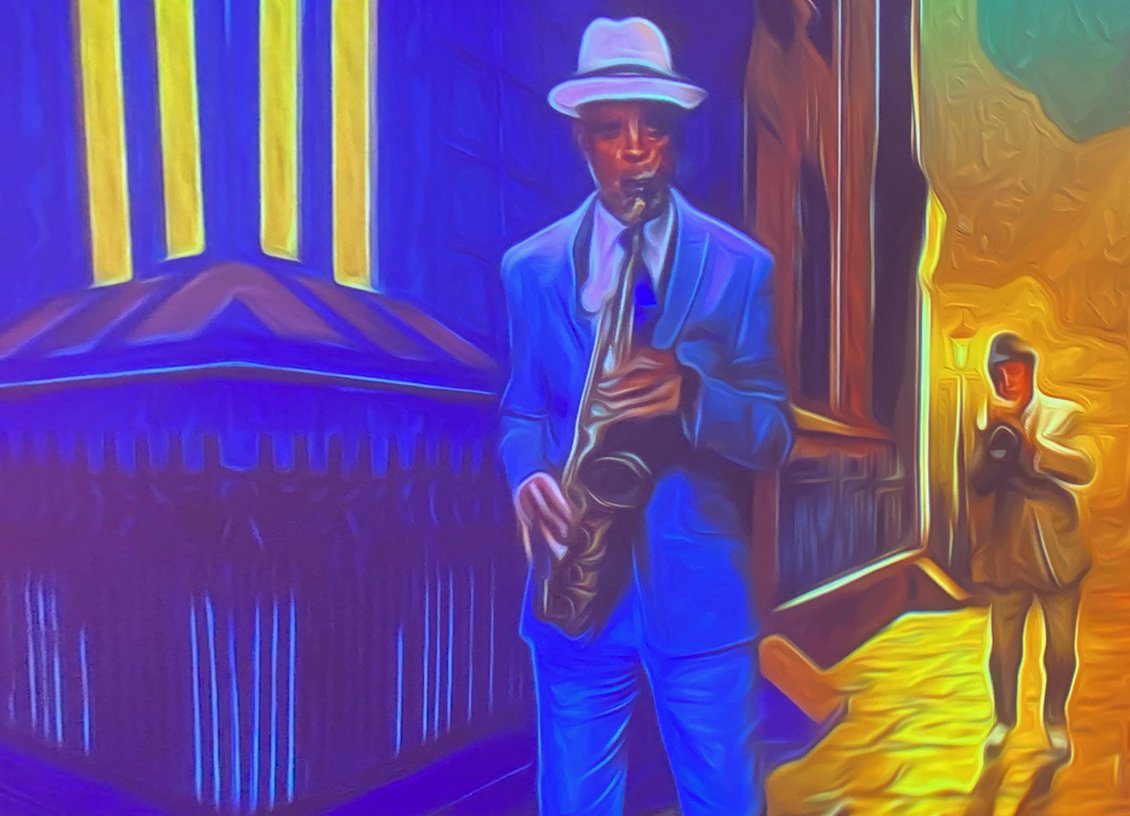 Be sure to watch the Mississippi River / New Orleans history show in the theatre. It paints an amazing picture of th eculture and history in New Orleans. 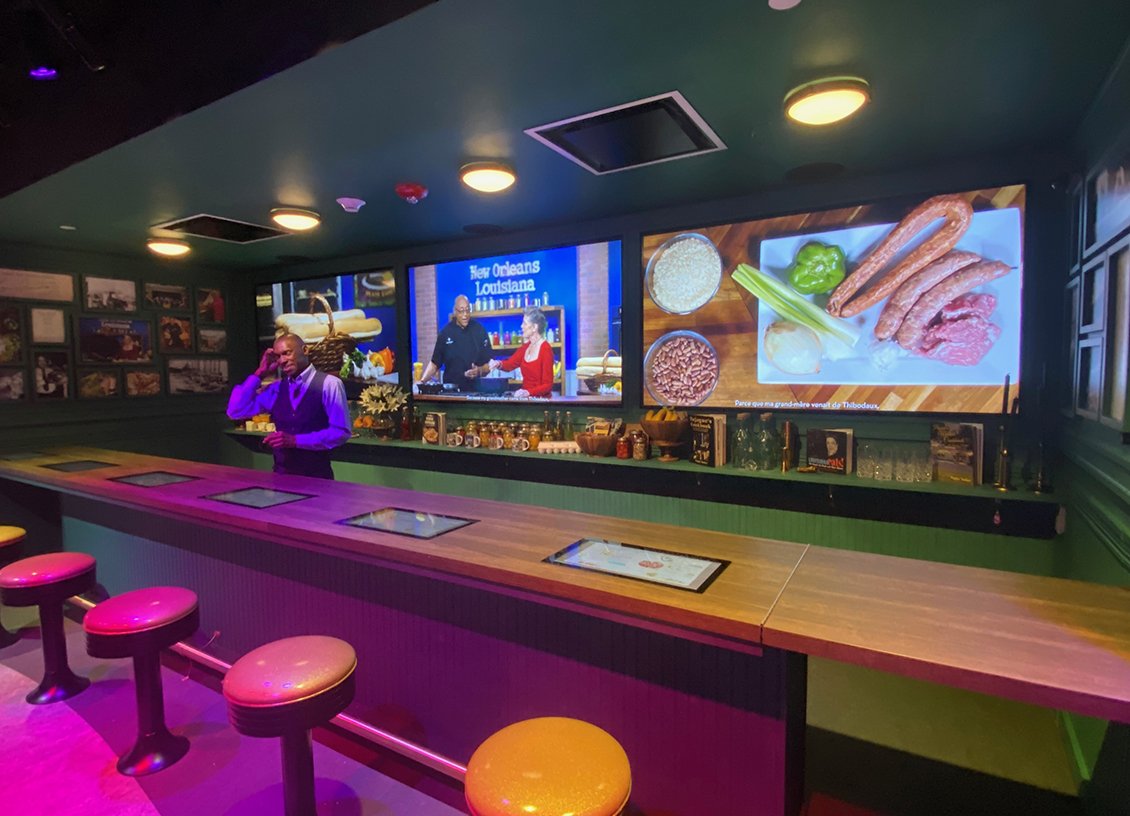 Sit at The Story Café to learn how to make jambalaya and an assortment of other Big Easy classics. 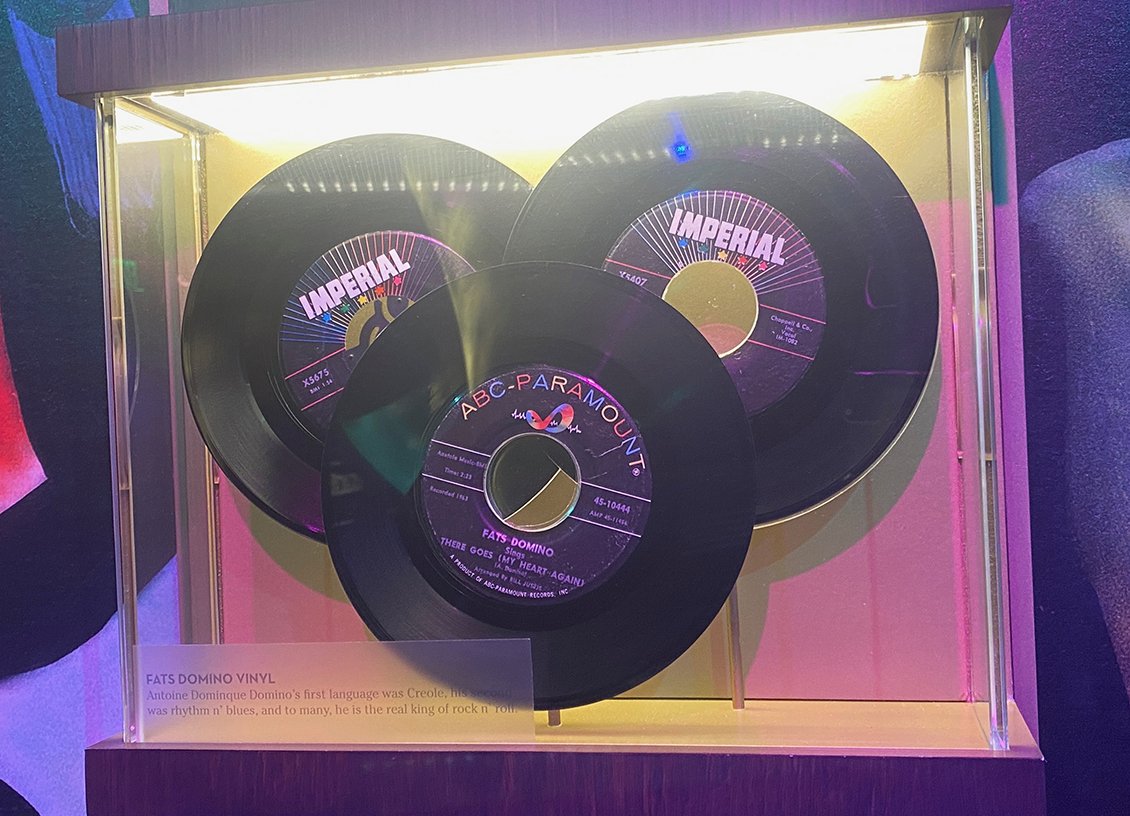 Peruse the musical artifacts in the Our Music exhibit, and pick up a souvenir at the gift shop.

Vue Orleans is located in the new Four Seasons Hotel, at the base of Canal Street, right on the Mississippi River.

Crescent Park is a 1.4-mile linear riverfront greenspace located along the banks of the Mississippi River in New Orleans, Louisiana. The park opened in 2014 and is one of the newest additions to New Orleans’ world-renowned parks system. Crescent Park features a variety of amenities including walking and biking paths, playgrounds, picnic areas, and scenic overlooks. The park also offers stunning views of the Mississippi River and the city skyline. Crescent Park is a great place to enjoy the outdoors and get some exercise while taking in the sights and sounds of New Orleans, or just sit and imagine the history of the city and the river in front of you.

If you want to catch the real nature of the city, you have to head out of the French Quarter, and check out the amazing Audubon Park.

This beautiful spot is one of the most popular parks in New Orleans, and is named after John James Audubon, the famous naturalist, artist, and ornithologist (that means bird expert) who lived in New Orleans from 1821 to 1837.

It’s a great place to visit if you’re looking for a place to relax and enjoy the outdoors. This amazing park is also a great place to take your family or friends for a day of fun. You’ll see thousands of turtles, ducks, birds, and hundreds of ancient live oaks, some of the branches nearly sitting on the ground.

I would suggest riding out there on the historic St. Charles Streetcar Line. No visit to the city is complete without at least one trip on their streetcars, and this one will take you from the French Quarter all the way out to this amazing park.

Audubon Park is located at 6500 Magazine Street, in the Uptown/Carrollton area of New Orleans, Louisiana.

If you wanna see behind the scenes of the biggest party on Earth, then check out Mardi Gras World, where they build some of the biggest and most elaborate parade floats and props.

Visitors can see firsthand how the floats are designed and built, and learn about the history and traditions of Mardi Gras.

Mardi Gras World is located at 1380 Port of New Orleans Place in New Orleans, right on the Mississippi River.

A post shared by The National WWII Museum (@wwiimuseum)

One of the best museums dedicated to the history of America’s contribution to the Second World War is in New Orleans.

The National WWII Museum is dedicated to educating visitors about the history and legacy of World War II. The Museum offers a variety of exhibits, educational programs, and events that honor the individuals who served during the war. The Museum also serves as a research center for scholars and students interested in studying the war.

The Museum’s collections include more than one million artifacts, documents, photographs, and film footage related to the war. The Museum’s library contains over 50,000 books and periodicals on World War II. The Museum’s archives hold a wealth of primary source material, including letters, diaries, journals, maps, and oral histories.

See the 4D film, “Beyond All Boundaries” narrated by Tom Hanks himself! Catch a performance of The Victory Belles, a female vocal trio, who sing the music of the 1940s.

Immerse yourself on the Road to Berlin. You’ll feel like you’re walking through bombed-out villages, navigating the hedgerows of Normandy, slipping on icy paths, while surrounded by the sounds of war.

The National WWII Museum is located at 945 Magazine Street in New Orleans, Louisiana. 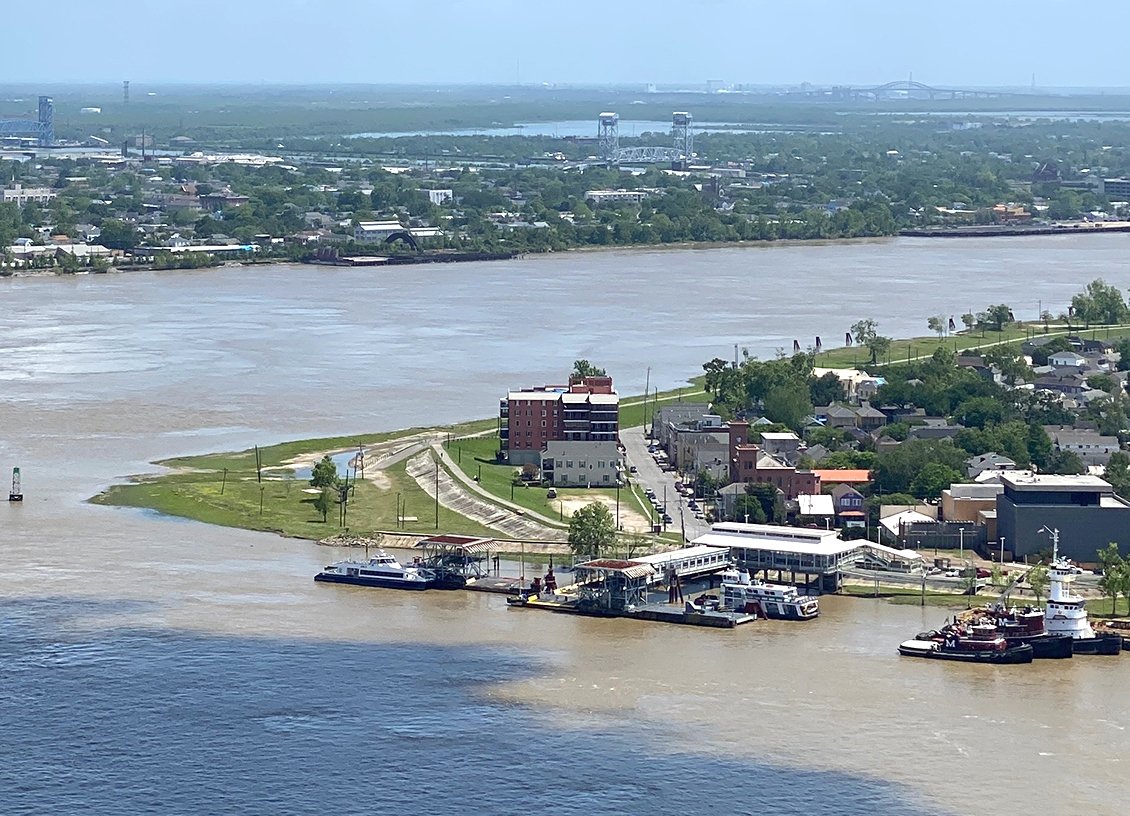 The Canal Street Ferry is one of the most iconic features of New Orleans. The ferry has been in operation since 1827, making it one of the oldest continuously operating ferry services in the United States. The Canal Street Ferry provides a vital link between the French Quarter and Algiers Point, as well as offering stunning views of the Mississippi River.
There are loads of great places to eat and drink. Make sure to pop in to the Algiers Historical Society for info on the area.

So much of New Orleans is below sea level, that the dead (who may or may not sleep), rest above ground in cities of crypts.

Part of the 1999 movie “Double Jeopardy” (starring Ashley Judd, Tommy Lee Jones, and Bruce Greenwood) was filmed in New Orleans. There was one scene where Ashley’s character “Libby” is locked up in a crypt at “Lafayette Cemetery No. 3” (which was actually Lafayette Cemetery No. 1) by Bruce Greenwood’s character “Nick”. If you haven’t seen this flick, I highly recommend it.

You have to visit at least one of the famed cemeteries to say you’ve been to New Orleans. You can take a Haunted tour, get there in a Royal Carriage, or just walk them with a professional guide.

There are many cemetery tours available, but we recommend the Official Tour of St. Louis Cemetery No. 1 with Cemetery Tours NOLA. They are located at 501 Basin Street in New Orleans. 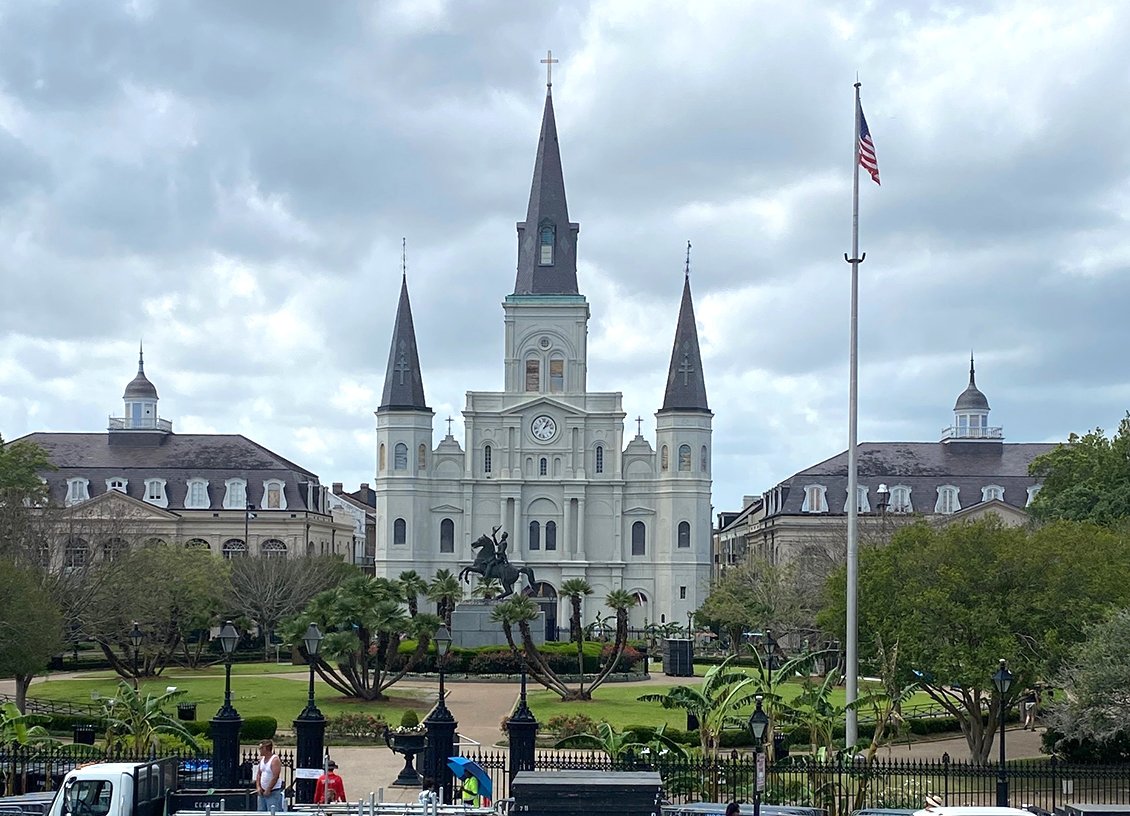 Jackson Square is a historic park in the heart of the French Quarter that has been witness to some of the most important moments in New Orleans history. The square was named after President Andrew Jackson, who oversaw the city’s transition from French to American control following the Louisiana Purchase in 1803. Today, the square is a popular gathering place for locals and visitors alike, with its lush gardens, iconic fountain, and St. Louis Cathedral looming overhead.

Well, there you have it! The Top 11 Things to Experience when you’re in New Orleans, Louisiana. If you are there for an extended stay, consider staying in an historic hotel, taking in some of the many organized tours, visiting the many music venues on Bourbon Street, taking a riverboat cruise on the mighty Mississippi River, and eating at some of the best food spots in town.