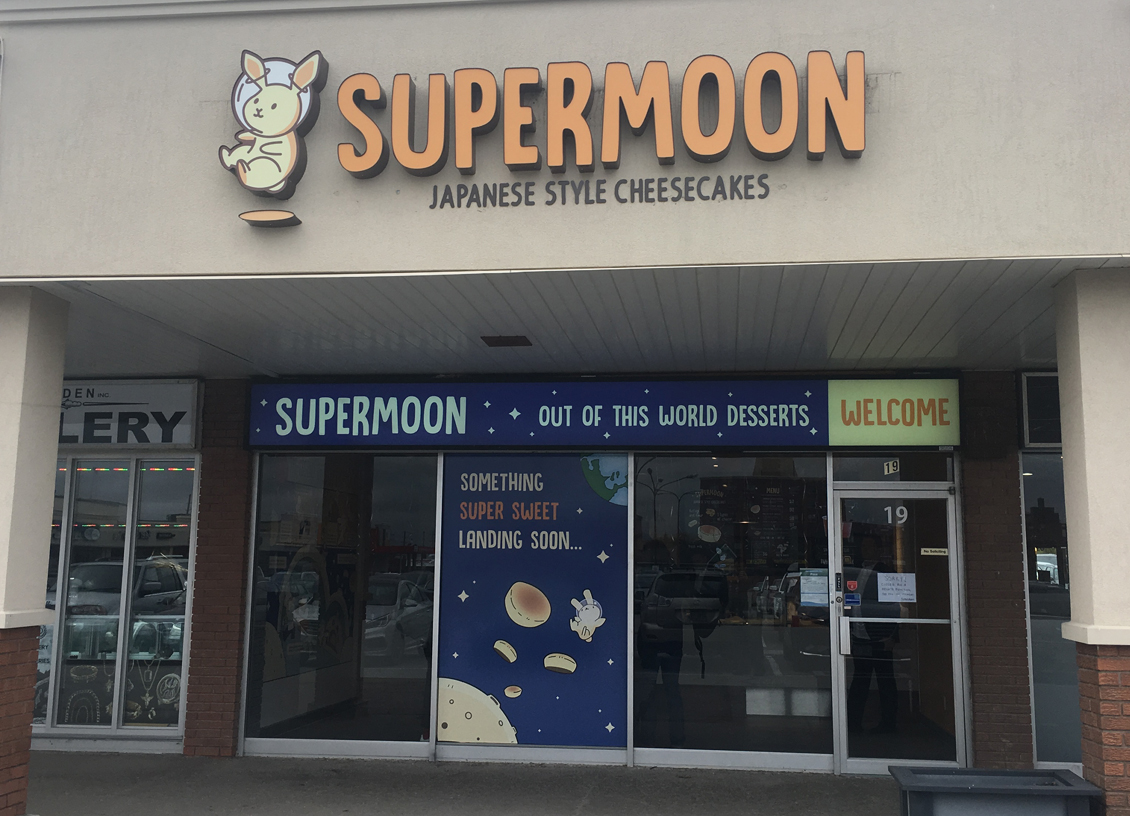 “We wanted to bring some fun trendy food that is often found in Toronto to our local neighbourhood” said Sami. “We looked for an location along Queen Street, and then the location in this plaza (located at 128 Queen Street South) opened up. The stars and planets just aligned.” 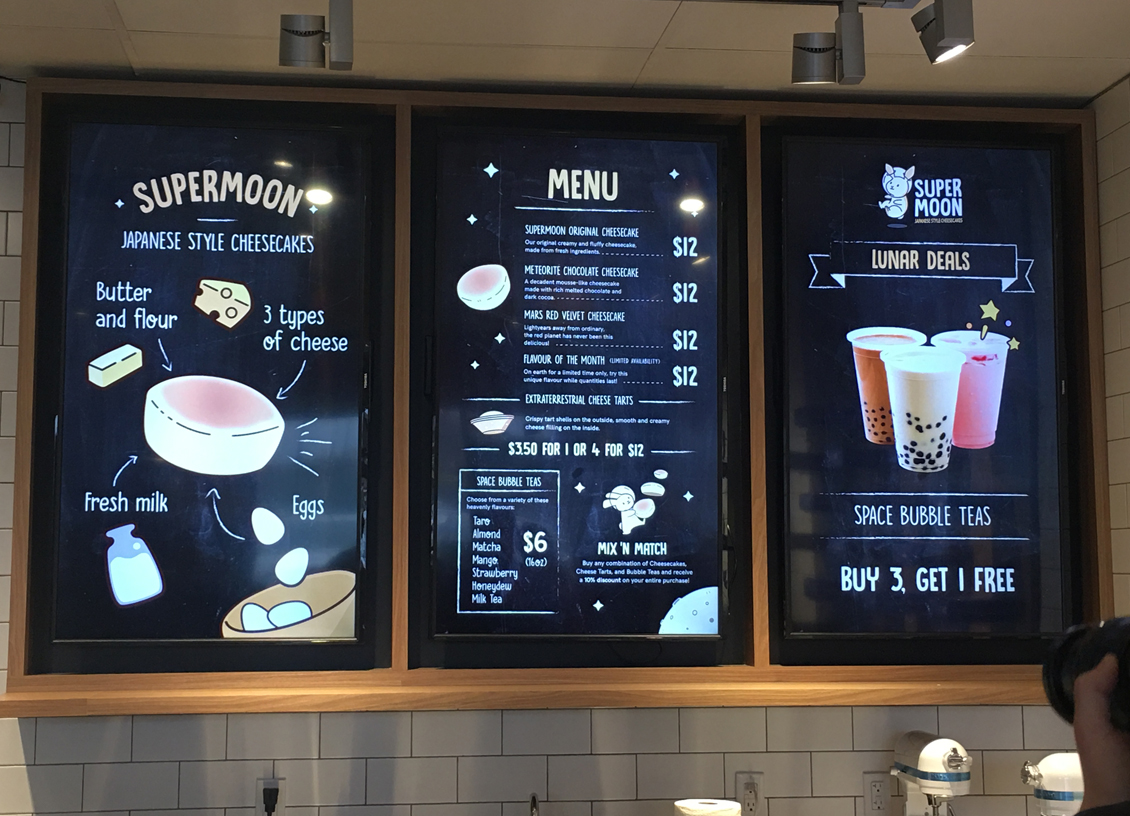 Mona is the creative chef extraordinaire behind Supermoon Japanese Style Cheesecakes. “The difference between Japanese style cheesecake and regular cheesecake is that Japanese Style uses less cream cheese, and has a lot of whipped egg whites to keep it super fluffy” said Mona. 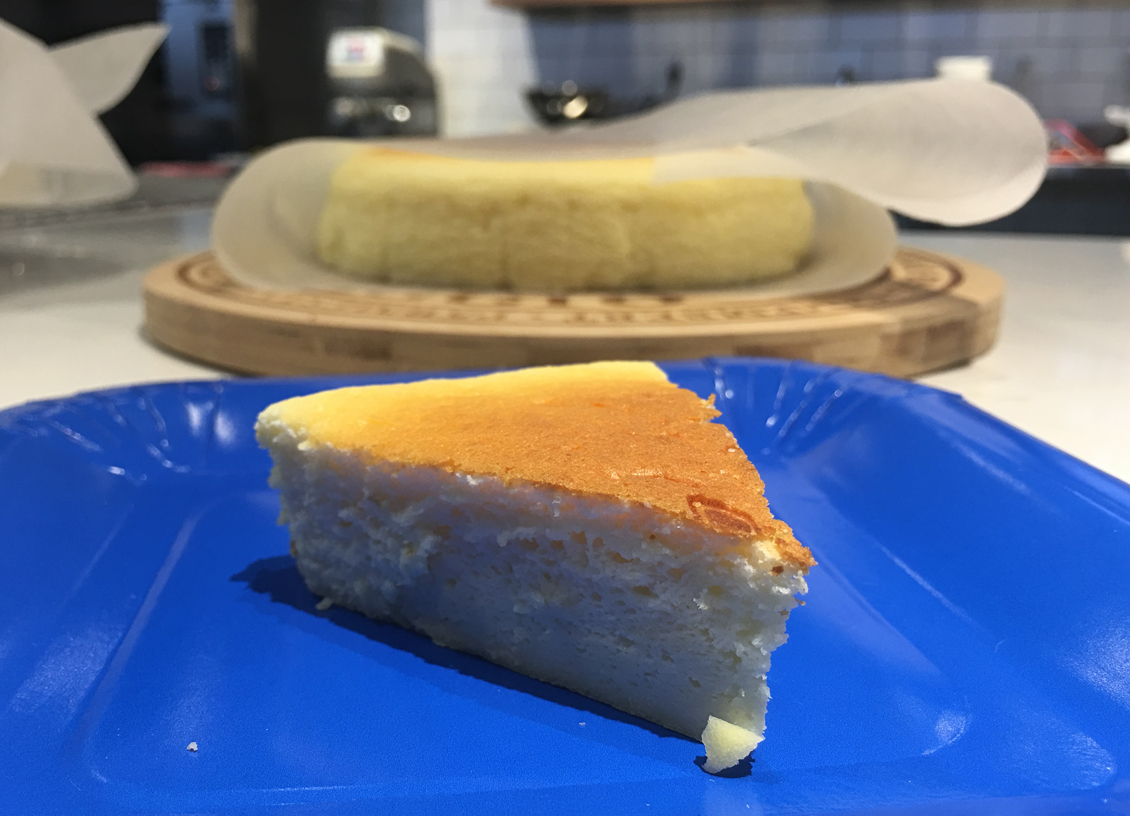 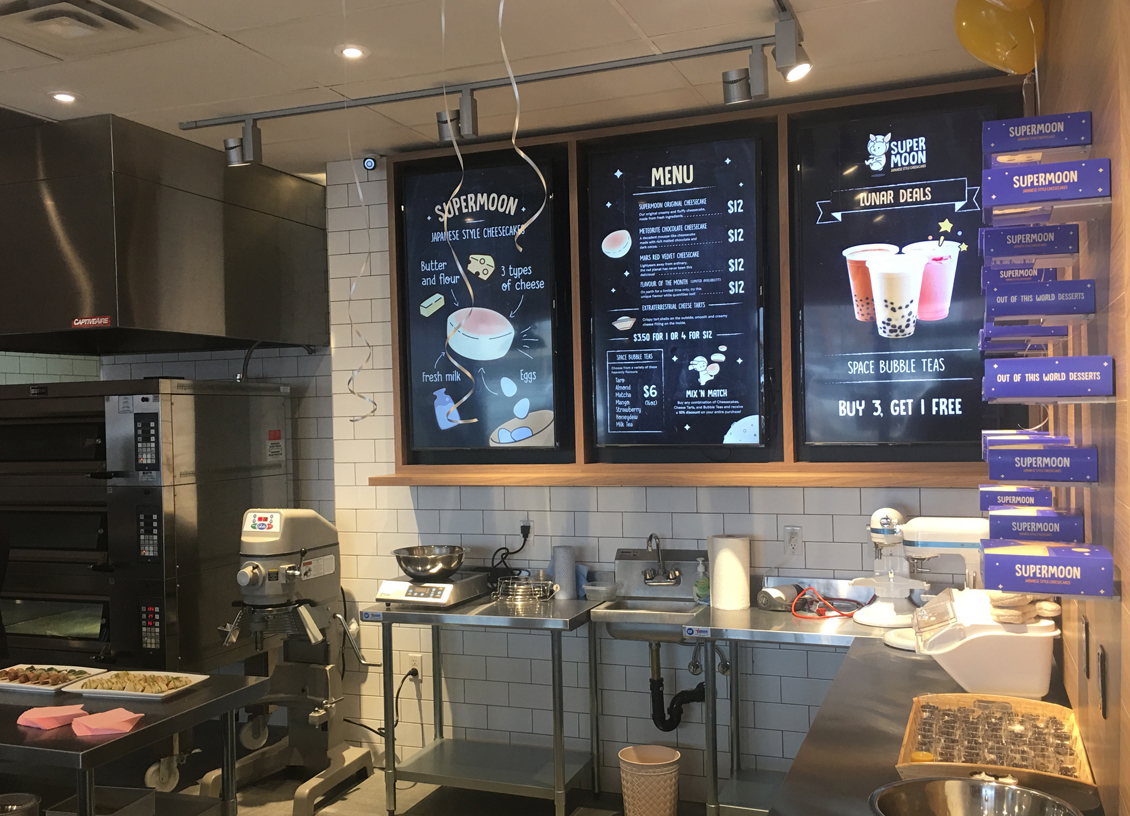 “The idea of Supermoon has been in development since late 2016 and after all of our hardwork it feels to have finally landed in Streetsville, Mississauga.” says Jerry Grymek. “The west end has a growing community base, cultural scene, and food options. We were able to taste a lot of versions of the recipes so the journey has been as fun as the destination. I will be helping with the Marketing and social outreach, and we will be looking to engage in fun ways with our followers. We want to grow as this is only the beginning for us – it’s one small step for Streetsville Mississauga, one giant step for Supermoon!”

Jerry is no stranger to social, and helping brands grow. “Looking ahead, we want to incorporate Flavours of the Month that will play off of key seasons and holidays (i.e. Pumpkin flavour in October). We will look to also try new items as well so be sure to follow us as we test launch more tasty treats!”

The concept was there, the location was secured, the recipes were in place. Now all that they needed was a name. 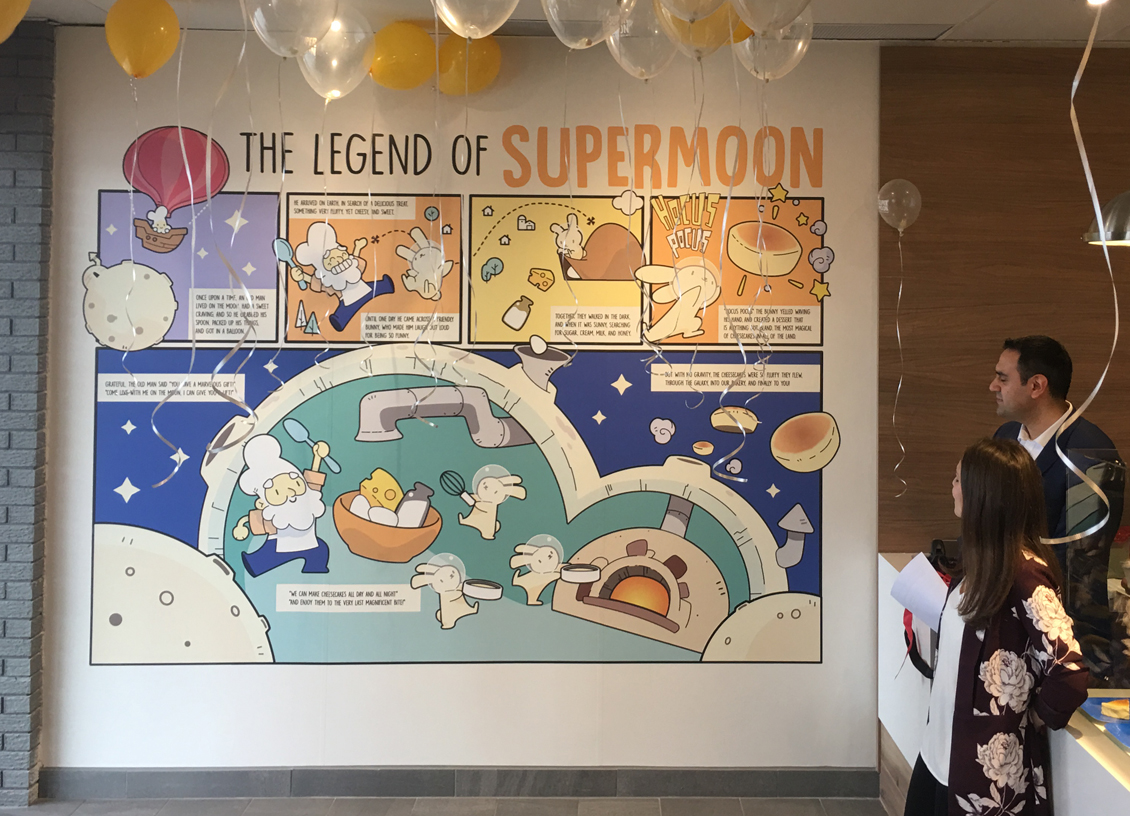 Mona explained that the idea for the name came from a story she wrote based on a legend, that Sami turned into a poem:

The Legend of Supermoon

Once upon a time, an old man lived on the moon. Had a sweet craving, and so he grabbed his spoon, packed up his things, and got in a balloon. He arrived on earth, in search of a delicious treat. Something very fluffy, yet cheesy, and sweet. Until one day he came across friendly bunny, who made him laugh out loud for being so funny. Together they walked in the dark, and when it was sunny, searching for sugar, cream, milk, and honey. “Hocus Pocus” the bunny yelled waving his hand, and created a dessert that is anything but bland. The most magical of cheesecakes in all of the land. Grateful, the old man said “you have a marvellous gift! Come live with me on the moon, I can give you a lift!” But with no gravity, the cheesecakes were so fluffy they flew, through the galaxy, into our bakery, and finally to you! “We can make cheesecakes all day and all night, and enjoy them to the very last magnificent bite!”

This poem is depicted on the left most wall in the waiting area of the bakery, for all to read. It’s an ingenious way for customers who are waiting for their orders to learn about the bakery.

Mississauga is sister city to Kariya in Japan. “Since 1981, Mississauga has proudly called Kariya its sister city. The sister city initiative was introduced in the 1950s as a way to develop communication networks between cities of the world. The main goal was to reduce misunderstandings and conflict between nations, particularly in the aftermath of World War II.” ~ source Mississauga.ca

Mississauga created Kariya Park in 1992 to commemorate the relationship between the two cities. Kariya Park is an escape from the hustle and bustle of the big city, with an array of rhododendrons, pine, gingko and sweetgum trees. The park opened in 1992, and is located off of Kariya Drive near Burnhamthorpe Road, east of the Mississauga Civic Centre.

With this relationship, it makes the opening of Supermoon Japanese Style Cheesecakes that much sweeter! 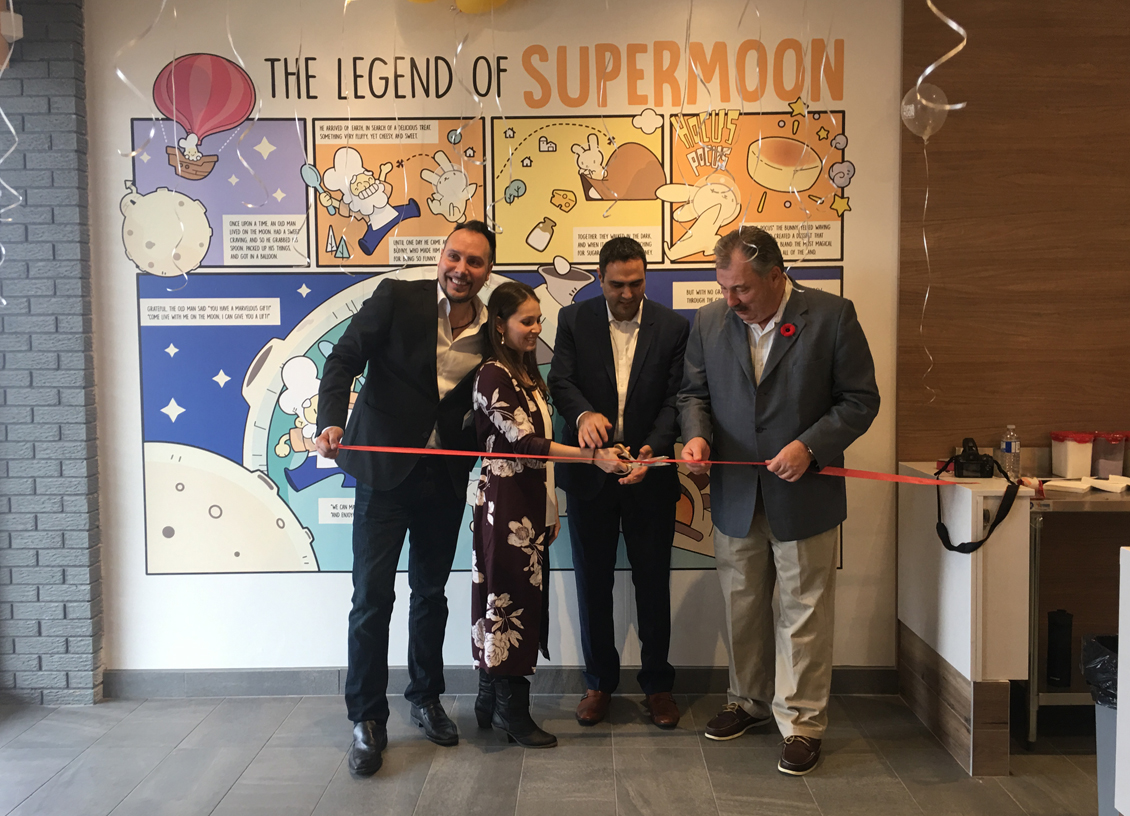 Supermoon is open for business!

Supermoon Japanese Style Cheesecakes is a takeout only bakery, located at 128 Queen Street South, Unit 19, in the heart of Streetsville, a community within Mississauga Ontario. It is now open to the public.