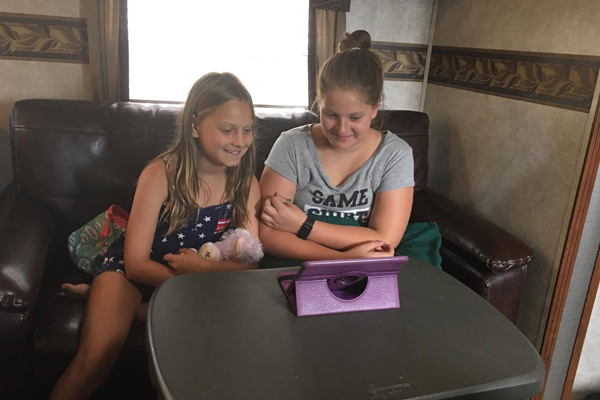 We have a fun summer ahead of us. Traveling, RVing, swimming, campfires and road tripping. But there are gonna be times when the weather is not that great, or we just want to stay inside the trailer, relax and watch a movie.

The good thing is with Netflix, we can stream from anywhere.

Here are some of my favourite movies on Netflix right now: “Well I got her number. How do you like them apples?”

This movie is filled with brilliance, sarcasm, romance, and drama.

“Will Hunting, a janitor at M.I.T., has a gift for mathematics, but needs help from a psychologist to find direction in his life.” ~ IMDB

With a great supporting cast, topped off with awesome performances by Matt Damon and Robin Williams, Good Will Hunting is a must see. “When you think of garbage, think of Akeem.”

This comedy will keep you laughing from beginning to end.

“An African prince goes to Queens, New York City to find a wife whom he can respect for her intelligence and will.” ~ IMDB

Eddie Murphy and Arsenio Hall not only play the 2 main characters, but also play several other roles as well. “We can’t even get cable TV here, Stacy, and you want romance!”

Jobs with crappy uniforms, trying to figure out how to ask out that girl you like, a friend moving in on that girl you like, a strict teacher, and the token stoner surfer dude. That is Fast Times at Ridgemont High. A fun drama that showcases the life of a bunch of teens going through high school in Southern California.

Good music, good friends, and part time jobs you’d rather not be at. Pretty much sums up my high school years. There is a pretty good chance you will relate to one of the characters in this flick. If you are ever going to skip school, this is the way to do it. Although, chances are your parents and teachers have already seen this classic, so I wouldn’t use the same excuse as Ferris (nor would I suggest taking your friend’s parent’s Ferrari for a joyride).

“A high school wise guy is determined to have a day off from school, despite what the principal thinks of that.” ~ IMDB

Matthew Broderick puts on a stellar performance, and together with the rest of the cast, this one is sure to become one of your faves… if it is not already! “Hello. My name is Inigo Montoya. You killed my father. Prepare to die.”

This classic is one of my wife’s favourites. I hadn’t seen it in it’s entirety until we met. It is now a family favourite.

“While home sick in bed, a young boy’s grandfather reads him a story called The Princess Bride.” ~ IMDB

Such a fun movie. Lots of one liners and jokes, and good action. Highly recommend this one! “What else am I supposed to do, stay here and learn?”

Good friends and a great soundtrack is the perfect recipe for an awesome road trip.

“Four friends take off on an 1800 mile road trip to retrieve an illicit tape mistakenly mailed to a girl friend.” ~ IMDB

This movie has got it – fun, laughter, tunes, jealousy, romance, and a failed river jump attempt. The french toast and fraternity dance scenes are just two parts that will keep you laughing in this fun flick. Check it out! “When you keep saying ‘on the line’, you do mean online?”

Vaughan and Owens play two watch salesmen who find themselves out of work looking for their next challenge. That next challenge is selling the team at Google to bring them on as interns. Together with a team of misfits way younger and smarter than them, they prove that they can be what Google is searching for.

“Two salesmen whose careers have been torpedoed by the digital age find their way into a coveted internship at Google, where they must compete with a group of young, tech-savvy geniuses for a shot at employment.” ~ IMDB

This is a really fun movie. Vaughan and Owens work so well together. The Internship has a great supporting cast, with an exceptional performance by Aasif Mandvi.

So much to watch on Netflix!

From movies, to original programming, to a ton of fun for kids, there is no shortage of variety on Netflix.

What are your favourite movies and shows to stream? Let me know in the comments below.

Enjoy your summer, and happy streaming!