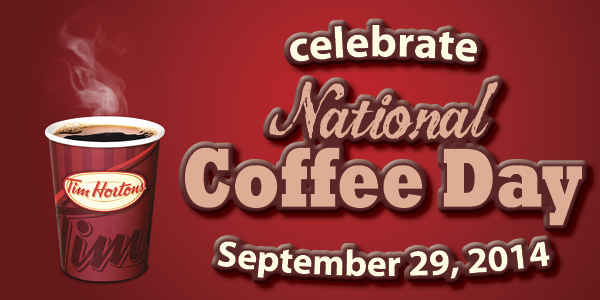 It’s clear Canada loves coffee.. and we drink a lot of it!

This Monday is National Coffee Day! People around the world are celebrating and appreciating the beverage often referred to as the “Nectar of the Gods”.

Some interesting facts from the Canadian Coffee Association of Canada…

• 65% of Canadians aged 18-79 say they drank coffee in the last day
• Canadian coffee drinkers consume an average of 3.2 cups of coffee per day
• 78% of Canadians say they consume coffee at breakfast
• Coffee and tap water are the most commonly consumed beverages, with nearly two-thirds of consumers having consumed them in the past day (65% and 63% respectively) After 50 years of brewing Canada’s favourite original premium blend, Tim Hortons recently introduced their new premium Dark Roast blend, made from 100 per cent Arabica beans. I’ve tried it, and it is fantastic!

Well if you like Tim Hortons new Dark Roast, you’re gonna love this!

“We’re honoured to be the first morning stop for millions of Canadians, and we want to say thank you in time for National Coffee Day by offering our exciting new small Dark Roast coffee for only $1,” said Dave McKay, Vice President, Beverages, Tim Hortons. In celebration of National Coffee Day, I am giving away a $25 Tim Hortons Gift Card to one of my lucky coffee loving readers!

On September 29, from 9am until 3 pm EST, Tim Hortons will be randomly giving away Tim Cards on Twitter. All you have to do is follow @TimHortons and answer the National Coffee Day questions using the hashtag #TimsCoffeeDay.

Disclaimer: I am a Tim Hortons #Timfluencer (ambassador)

If you would like me to review your product, send me an email at craig@bigdaddykreativ.ca or find me on “the twitter” at @BigDaddyKreativ

Tim Hortons is one of the largest publicly-traded restaurant chains in North America based on market capitalization, and the largest in Canada. Operating in the quick service segment of the restaurant industry, Tim Hortons appeals to a broad range of consumer tastes, with a menu that includes premium coffee, hot and cold specialty drinks (including lattes, cappuccinos and espresso shots), specialty teas and fruit smoothies, fresh baked goods, grilled Panini and classic sandwiches, wraps, soups, prepared foods and other food products. As of June 29,2014, Tim Hortons had 4,546 systemwide restaurants, including 3,630 in Canada, 866 in the United States and 50 in the Gulf Cooperation Council. More information about the Company is available at www.timhortons.com.