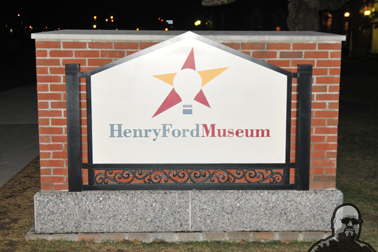 On January 8th, I flew out to Detroit with approximately 150 other online influencers (bloggers and micro-bloggers) to attend the North American International Auto Show (NAIAS) on behalf of Ford Canada. These online influencers included car enthusiasts, automotive bloggers, art, lifestyle, technology, design, fashion and parenting. It was a very interesting blend of people from 16 countries around the world.

Our first stop was the Henry Ford Museum. When we arrived, we were greeted by members of Ford Canada. I was overwhelmed by the museum. We got a sneak peak at the Driving America Exhibition, that opens to the public on January 29th. There were not only Ford vehicles, but over 100 other cars, buses, airplanes, trains… of all makes and models, taking up 80,000 square feet! Throughout the exhibit are 60 cases of artifacts, 18 interactive 42-inch touchscreens offering a more in-depth experience beyond the museum floor. There was also a really cool diner that will soon be open to the public called Lamy’s Diner, complete with table-top juke-boxes at each booth.

The Henry Ford Museum is home to the Ford Quadricycle. This was the first vehicle developed by Henry Ford. Ford’s first car was a simple frame with an ethanol-powered engine and four bicycle wheels mounted on it. The highlight for me was seeing the US Presidential fleet…

Ronald Reagan’s 1972 Lincoln (the one the assassination attempt on Monday, March 30, 1981 occurred) I was also pretty excited when I saw this vintage pop-up camper trailer! A few of the Canadian contingent gathered in Lamy’s Diner for a nostalgic shot (photo provided by the fab Julia Gabriel, who is @NuggleMama on “the twitter”). The Henry Ford Museum is a must see for any automotive enthusiast or history buff when visiting the Detroit area.

Disclosure: Ford Motor Company paid for my transportation, accommodations and food. I was not compensated for my time. I was not asked to write blog posts or promote NAIAS or the experience on social media. I did this on my own. The opinions are that of Big Daddy.

Here are a few more of the pictures I took: