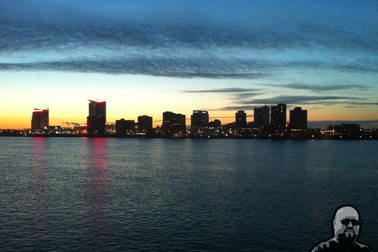 January 9th was a very early start. We departed for Cobo Center in downtown Detroit at 7am. Upon arrival, we settled in to our own private lounge. Out the window was as a beautiful view of Windsor, Ontario (Canada): Next we headed over to Joe Louis Arena for a Ford press conference. This was the official unveiling of the 2013 Ford Fusion.

Now I have to be honest… the Ford Fusion has never been one of my favourite cars. It has always been just blah to me. I was hoping this unveiling would renew my hope in the Ford mid-sized sedan, and that it would be a vehicle that would compare with a lot of it’s competitors in style, as well as fuel efficiency. Out walks Bill Ford, Great Grandson of Henry Ford, to welcome everyone, talk about Ford and it’s direction. He then bring’s out Ford’s CEO Alan Mulally. Alan introduces a video presentation of the design and work that went into the new Fusion. I’m not sure about everyone else in the room… but I was excited to see the damn car at this point. After the video, Alan introduced the new Fusion. Smoke started coming out of the doorway… cameras were at the ready. I tweeted out “I have feeling there is going to be a lot of flashes going off very soon #FordNAIAS”. I was right. Two 2013 Ford Fusions rolled out of opposite sides of the arena, and started driving around in circles, eventually stopping on spinning pads. Lasers and lights were everywhere… and the flashes filled the arena! Alan spoke a few more words, then 2 more Fusions came driving out and parked on the spinning pads. I was in awe. This car looked hot. I’m not even sure Ford used anything from the 2012. This was an all new design… and all new car. The press conference ended, and they invited media down on the floor to see them up close.

Once inside Cobo Hall, I made my way through several of the manufacturers displays. This was overwhelming compared to the Toronto auto show, which I attend every year.

Ford had set up a special “online influencers” lounge area for us to rest, charge our phones or tablets, and meet with Ford Execs. Right beside out lounge were 2 Fusions. I had a chance to get an up close look at this sweet ride. From the longer wheelbase to the Aston Martin-like design, this was a winner. They did not say what the Fusion would be priced at, but did say it was designed and built to look $8000-$12000 more than what it will sell for. I heard rumour it will be slightly more expensive than the current Fusion. I guess we will wait and see.

Q & A session with Mark Fields, who is Executive Vice President of the Ford Motor Company, The Americas Q & A session with Alan Mulally, who is President and Chief Executive Officer of the Ford Motor Company As well as seeing all the new Ford’s, I got to see all the cool new offerings and concepts of all the other brands. They don’t call the Detroit Auto Show the Grand-Daddy of them all for nothing!

Chevrolet had a Camaro set up on a Hot Wheels track: These 2 Ford Mustang GT500s were sweet: This Raptor display was awesome! I want to test-drive one of these bad boys: The view from the awesome Lincoln lounge, where a few of us stopped to recharge with a cappuccino: For more information on the North American International Auto Show, check out NAIAS

Disclosure: Ford Motor Company paid for my transportation, accommodations and food. I was not compensated for my time. I was not asked to write blog posts or promote the show or the experience on social media. I did this on my own. The opinions are that of Big Daddy.

Here are a few more of the pictures I took:
[nggallery id=7]

How to Prepare Your Home and Property for Long Travels