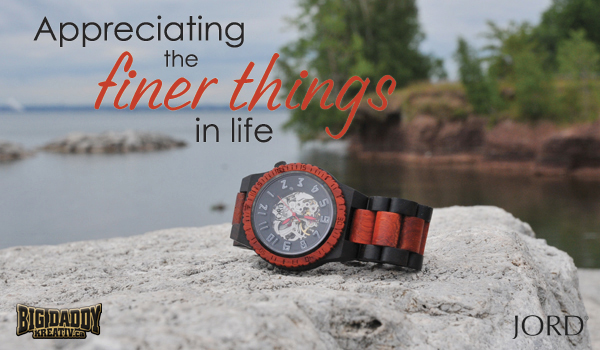 I’ve always been a jeans and t-shirt kinda guy. In high school, I didn’t follow the current trends. While there were many different groups that wore many different things, I just wore what I wanted.

Fashion was never a concern for me… until my mid to late 20s.

Once I found myself in a career where I needed to look good at social events, fashion became a priority. As well, I got tired of wearing cheap things. My Dad once told me, “I can’t afford to buy cheap things.” When I was younger, it didn’t make much sense. Now, it makes all the sense in the world.

Buy quality things once, instead of buying inferior products over and over again. Moments are bigger than minutes.

The thought of reviewing a wooden watch from Jord was intriguing.

I haven’t worn a watch in several years. I always depended on my smartphone. As a community manager, I have my phone in my hand more than the average person, and the time is always there. But, is that really fashionable?

Watches complement any outfit, regardless if you are going to a wedding, or taking the dog for a walk. I am quite traditional in most cases, but am open to new things, if it fits me. I’m not talking about size here… even though that is obviously important. It’s more about breaking out of my traditional comfort zone. Like wearing a new colour or pattern that I may not have in the past.

The Dover Series is my favourite Jord line, followed closely by the Sawyer Series. With 4 styles to choose from, there is something for everyone. When selecting the watch, I asked for Wendy’s input, because her input on fashion is important to me. She said that the Dover Series Ebony and Copper was something that she could see me wearing, but that the Dover Series Ebony and Rosewood would be a step out of the box for me, and a little more fashionable. I was on the fence. I really liked both watches. They were both elegant, and could be worn with anything. I have several watches, but none like these two. There are more lines to choose from, depending on your preference in woods and faces. Los of great combinations, which are sure to peak your interest, and make deciding on one pretty tough. Jord offers a great selection of quality woods to choose from. With so many different combinations, it really is tough choice – because they all look so good!

Choices in the Dover Series line are:
• Zebrawood and Dark Sandalwood
• Koa and Black
• Ebony and Copper
• Ebony and Rosewood

Choices in the Sawyer Series line are:
• Zebrawood and Obsidian
• Koa and Bronze
• Ebony and Ultramarine

Choices in the 94A Series line are:
• Dark Sandalwood
• Green Sandalwood and Maple
• Red Sandalwood

Choices in the Sydney Series line are:
• Red Sandalwood and Mother Of Pearl
• Maple and Rose Gold The woods in the watch I got are Ebony and Rosewood. Both sophisticated and rugged, these woods are beautiful, and compliment each other quite nicely.

Colour & Appearance: Brazilian Rosewood can vary in color from a darker chocolate brown to a lighter purplish or reddish brown, with darker contrasting streaks. The black streaks can sometimes form a unique grain pattern that is sometimes referred to as “spider-webbing” or “landscape,” very similar to Ziricote. Lighter yellowish sapwood is clearly demarcated from the heartwood.

Grain/Texture: Brazilian Rosewood has a uniform, medium to coarse texture with medium-sized open pores. The grain tends to be straight, but can occasionally be interlocked, spiraled, or wavy.

Sustainability: This wood species is in CITES Appendix I, and is on the IUCN Red List. It is listed as vulnerable due to a population reduction of over 20% in the past three generations.

Colour & Appearance: Found in East Africa, ebony wood has a high saturation of color and a natural glossy sheen. Due to the depth of tone the typically straight grain is not easily made out, though it is fine and uniform in texture. The hardness of ebony can make it challenging to work with so tools are routinely checked and sharpened to reduce pulling and poor edging.

Grain/Texture: Grain is typically straight or sometimes irregular, with a fine, uniform texture. Has a high level of natural luster.

Sustainability: This wood species is not listed in the CITES Appendices, but is reported by the IUCN as being data deficient. Glass
Sapphire glass is known in the luxury watch world as the definitive material for transparency and durability. Sapphire is a synthetic crystal (aluminum oxide Al2O3) rather than actual glass. It is colorless and optically clear. Mechanically, it is second only to diamond as the hardest and most scratch resistant materials on earth. It also has a very high modulus of elasticity and tensile strength, making it extremely versatile and resistant to impact/abrasion. JORD stays true to their mission of quality and craftsmanship by incorporating this same glass in many of our premium timepieces. One of my favourite features of the Jord Dover Series is the movement. All of my past watches were quite inexpensive, as I wanted something that I would not get upset if it broke. They all had something in common. They ticked, with every tick of the second hand. The timepiece in the Dover series is quiet, and the hands sweep. I had to put it right up to my ear to hear it. Featured in many of their men’s automatic watches including the Dover Series. Disclaimer: I received the Dover Series Ebony and Rosewood watch from Jord to review. All opinions are my own.


If you would like me to review your service, product, or travel destination, please send me an email at craig@bigdaddykreativ.ca or find me on “the twitter” at @BigDaddyKreativ

Luxury Gadgets You Might Want to Consider Saving For