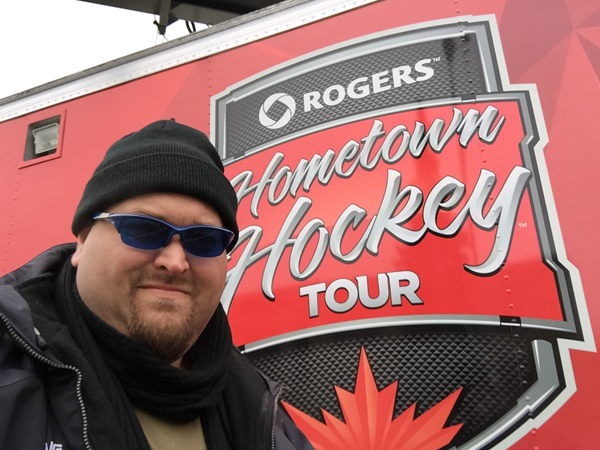 What an amazing weekend!

This past weekend, I attended the Rogers Hometown Hockey stop in St. Catharines, Ontario.

I was picked up from my home by Gem Limo in a Lincoln Town Car. Talk about a comfy way to travel!

After arriving in St. Catharines, I checked into my hotel, and headed straight down to downtown St. Catharines, where the Hometown Hockey event was taking place. I was a bit early, so I got to see them setting up and some of the bands doing sound check.

Some of the fun events at Rogers Hometown Hockey

Sportsnet had an activation where you could be a broadcaster, and call game highlights with Evanka Osmak!

X-Box was there with several X-Box One units set up in a trailer, where you could play NHL15. If you were lucky, you could get a spot on a leather couch under a heater!

Samsung was there showing their latest devices.

As well, you could get a custom personalized hockey puck! What a cool activation!

Rogers brought the action right to us with the Game Centre Live Mobile Centre.

Inside, they gave a full interactive demonstration of the features of Game Centre Live. To say it was a cool experience is an understatement!

At the end, they gave everyone a special pair of gloves, that not only keep your hands warm, but you could also wear them and use your smartphone at the same time!

The Hometown Hockey Mascot was walking around taking pictures with all the kids… even the big ones!

Get your picture with Darcy Tucker!

This was one of the highlights of the day! I got to meet and get my picture taken with Darcy Tucker! He happens to be Wendy’s favourite hockey player.

The lineup was always pretty long, but it moved quite quickly. Darcy was awesome, and he chatted with everyone. Such a personable guy!

Rogers Sportsnet brought their mobile studio to broadcast live from Hometown Hockey. This studio travels with them for the entire Hometown Hockey tour across Canada.

ScotiaBank set up a really cool Community Locker, where you could watch the game, play table hockey, or just take a rest on the benches set up. They were also popping fresh popcorn for you to enjoy.

They were also handing out Hometown Hockey jerseys to kids 16 and under. I managed to get a couple for my girls.

One of Ottawa’s favourite food items, Beavertails, had their food truck there. I remember having Beavertails in Ottawa many years ago. It is awesome that they have now joined the food truck movement!

Warming Lodge and the Kid Zone!

It was a fairly cool weekend, so the Warming Lodge that was set up was a very nice touch!

The best part… they were serving hot chocolate, and there was comfy Muskoka Chairs inside to relax in.

The Kid Zone was great! There was lots to do for the young ones.

Today’s Parent was there with crafts for the kids.

Live Entertainment, Become A Hockey Star and an Outdoor Rick

Kitchener band Breaching Vista were just one of the awesome bands Hometown Hockey brought in to entertain the masses.

These guys rocked the tunes and had everyone singing along to covers of alt-pop-rock songs.

Other bands who provided entertainment were The Hot Karls, Them Dang Rattlers and Poor Young Things.

They had a few hockey players lined up, with steps behind them. You could become your favourite player!

There was even an outdoor rink set up, where you could play pickup with other guests.

Autograph and Picture with Shayne Corson, and a Hotstove interview with Tara Slone

Shayne was there for a limited time. The lineup was long, but he managed to sign a lot of autographs. Everything was well organized, and ran smoothly.

After 45 minutes of signing autographs, Shayne joined Darcy Tucker on stage for a “Hotstove” interview with Tara Slone.

Getting autographs and pictures with two of my favourite Maple leafs alumni was clearly the highlight of my weekend!

But the highlights weren’t over…

I was invited to a VIP meet and greet with Ron MacLean. There was about 30 of us in total. He met with each of us, talked about our hockey memories, and then took pictures with everyone.

This picture was taken right before the interview. Ron, Josh and Tara Slone were just talking casually with fans.

After the interview, Ron stayed outside the Rogers Sportsnet Mobile Studio and signed autographs and took pictures with attendees.

Having a VIP pass made this experience even more exciting!

Talk about a small world! I met Thomas Weller through my wife. The two of them attended high school together in Niagara Falls. He was the official photographer for the St. Catharines stop of the Rogers Hometown Hockey tour. If you ever need a great photographer in the Niagara region, look no further! You can check out his work at wellerphotography.ca.

Remember I teased in my last blog post about something I was going to give away? Tada! The folks at Rogers have graciously given me a Samsung Galaxy Tab S 10.5″ 16MB tablet to give away to one lucky reader of my blog.

All you have to do to enter is click on the Giveaway Tools link below and follow the prompts. Make sure to enter in your first and last name, and your email address. The more things you do, the more entries you will get!

What a fun-filled weekend!

Although ti was a super fun weekend, I was really happy when I arrived home, and my girls were waiting for me. They were so excited to see me, and I was excited to give them their jerseys, hats and scarves. Wendy was pretty happy with her signed Darcy Tucker picture.

The rest of the 2014 Hometown Hockey Schedule

If Hometown Hockey is going to be in your town, or even close to it, I highly recommend attending the festivities! It’s so much fun, and best of all, it’s all free! Check their website for current info – hometownhockey.com

Disclaimer: I am a Rogers Hometown Hockey ambassador. All opinions are my own.

If you would like me to review your product, service or travel destination, please send me an email at craig@bigdaddykreativ.ca or find me on “the twitter” at @BigDaddyKreativ

5 Essential Things to Have in Mind When Traveling

Spectacular Ways to Surprise Your Partner on Valentine’s Day