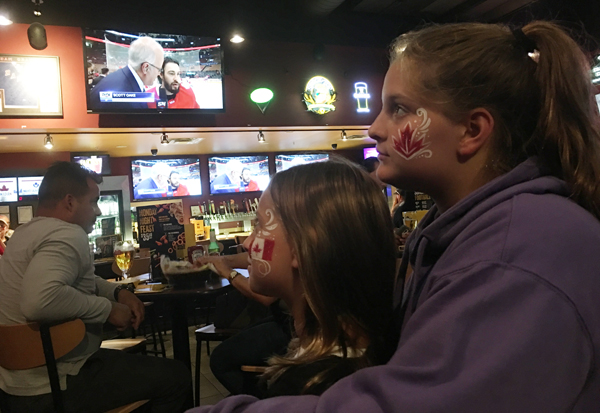 Our family loves hockey. We are Toronto Maple Leaf fans. Even though our boys in blue haven’t been playing well these past several years, we still love to watch them play.

We have many friends who also love hockey. It’s awesome when you can get together with other’s who love hockey to enjoy watching a game together. It’s even better when you are cheering on the same team.

But our love for the Toronto Maple Leafs isn’t all we love about hockey. We are fans of the game, and all things Canada.

What is better than watching hockey, while enjoying a cold one and some awesome wings? Not a whole heck of a lot! That’s why when Buffalo Wild Wings announced that they were showing the 2016 World Cup of Hockey at their locations, I was stoked.

Why? Because hockey. And chicken wings. And roasted garlic mushrooms. And beer battered onion rings. And street tacos. And soft pretzels. And so much more. All tournament games will be played at the Air Canada Centre in Toronto. Being able to enjoy these awesome games at B-Dubs allows me to enjoy some affordable beverages and some fantastic eats. Win win!

One of the games we caught at B-Dubs was the Team Canada vs. Team Czech Republic game. It was an exciting game, which Team Canada dominated their way to a 6-0 win.

It was great seeing my buddy Marcel there enjoying the game while mowing down some delicious wings! There was a face painter on hand painting awesome designs on anyone who wanted to show their Canadian colours. The girls had their faces painted, with Canadian colours on one side of their face, and the Czech Republic flag on the other. When I noticed they were getting the Czech Republic flag on one side, Lauren said to me, “I love the colours, and because this is a world tournament, we should be welcoming them here with open arms, because we are Canadian.” Ya. You got that right kiddo. B-Dubs is a great place to catch hockey with your friends!

B-Dubs is a great place for you and your MVP friends to catch a game as well. My buddy Steve and I went to Buffalo Wild Wings to catch a Leaf’s game, and that is where I truly saw his passion for hockey. He plays hockey in a beer league every week. Steve’s passion for the game was contagious, as we both cheered on the boys in blue with many other enthusiastic Leaf fans. You never know who may pop in to B-Dubs… … or what may pull up in front. The 5 Stages of Hockey Fandome

Buffalo Wild Wings had a pretty cool pack they gave out to a few select media that night. I received the pack, and had a good laugh when I opened it.

Stage One: The Cold Sweats
Tension builds and so do your pre-game nerves.
• Stay dry with deodorant.

Stage Two: The Sore Throat
You start to lose your voice from yelling at the top of your lungs.
• Cough drops to keep you cheering.

Stage Three: The Ringing Ear Drums
As the excitement in the building grows, things get loud.
• Pop in the ear plugs for some relief.

Stage Four: The Hair Pulling
The game is headed into overtime, and so are your stress levels!
• A hair elastic to get your hair out of the way.

Stage Five: The Tears
Whether it’s out of happiness or sadness, things get emotional.
• tissues to dry those eyes

The folks at Buffalo Wild Wings have graciously given me a $100 B-Dubs Gift Card to give away to 1 of the lucky readers of my blog.

To qualify for the contest, you must comment on this post, and tell me your favourite chicken wing flavour. Saucy or dry? “Play It Safe” Mild or “Don’t Wipe Your Eyes” Hot? Be sure to include your email address where prompted to qualify. It’s that simple. Do you want another chance to win?

If you want another shot at a $100 B-Dubs Gift Card gift card, make sure to check my buddy Casey’s contest as well! Disclaimer: I am a helping to promote hockey at Buffalo Wild Wings.

If you would like me to review your service, product, or travel destination, send me an email at craig@bigdaddykreativ.ca or find me on “the twitter” at @BigDaddyKreativ

4 Tips That Will Help You Select Footwear for Every Occasion