A trip to the Hamilton Bulldogs vs. Rochester Americans game. #HamOnt 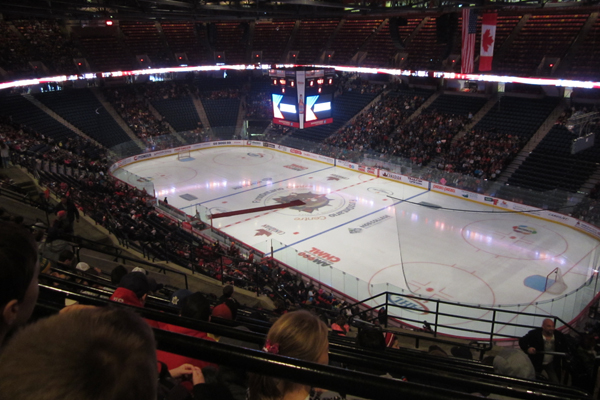 On Tuesday, November 4th, I went to the Hamilton Bulldogs vs. Rochester Americans game with my school. The game was played at The FirstOntario Centre in Hamilton.

I was at the FirstOntario Centre earlier this year with my family and some of our camping friends to see Monster Jam. We’ve also seen Disney on Ice there, but never a hockey game.

A little about the Hamilton Bulldogs In the first period, there was a big fight between two of the players. One of the Bulldogs got put in the penalty box, giving the Americans a one-player advantage.

During the intermission, there was a story read by 10 of the Bulldogs on the jumbo-tron. The story was called “The Hockey Sweater”. When we returned to our seats, the game had already started again. The Hamilton Bulldogs mascot Bruiser came up our area. I got to hi-five Bruiser. He was hi-fiving everybody in the aisle! It was so cool to be that close to the mascot of a professional hockey team!

The Bulldogs won 6-1! Everyone cheered so loudly! It was great that my first time at a live hockey game, the team we came to cheer for won. It was an amazing experience. I had a lot of fun with my friends. The back of the bus Have you ever been to an AHL game? Tell me who played, and if you had fun.

Thanks for stopping by my Daddy’s blog and reading about my school trip!

Having Your First Snowshoe Adventure At Finger Lakes