The return of the Gilmore Girls on Netflix. #StreamTeam 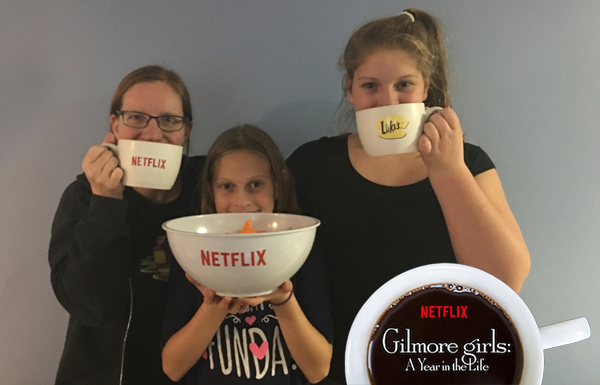 It’s not too often the girls find a show they can agree on. They are both into different types of programming.

Lauren still loves the animated shows, and the pre-teen bubble gum pop shows. Shows and movies including: all things “Ever After High” and “Monster High”, “Home”, “Diary of a Wimpy Kid” (all 3 of them), “Cloudy With a Chance of Meatballs” (1 and 2), “iCarly”, and anything Disney. Rachel is a bit different. She is done with anything animated and kids shows for the most part. Her list of faves include: “Guardians Of The Galaxy”, “Cool Runnings”, “Fuller House”, “The Princess Bride”, “P.S. I Love You”, “Ghostbusters”, “Radio”, and “The Hurricane”.

Wendy used to watch Gilmore Girls all the time when it was originally on in the early to mid/late 2000s. With the new Netflix Original series starting soon, Wendy and the girls have been binge watching old episodes of the Gilmore Girls. They’ve been having some great bonding moments, which is awesome. With our busy lives, it’s not too often we can all get to watch tv together, let alone commit to watch several episodes of a show.

This month, the folks at Netflix challenged all the members of the StreamTeam to watch the new Netflix original, “Gilmore Girls: A Year In The Life” when it debuts. The catch? Watch it with your daughter(s). Bond, Enjoy.

So I talked to Wendy, and told her about the challenge. She loves the Gilmore Girls, so it was an quick “Sounds awesome” response. With the return of the Gilmore Girls, Netflix has given moms and daughters a show that can relate to their relationship. • 39% of respondents say they’re two peas in a pod, and are BFFs like Rory and Lorelai Gilmore
• 31% say they may be polar opposites like Lane and Mrs. Kim, but they just want what’s best for each other
• 30% know it can be complicated like Lorelai and Emily Gilmore, but they can’t imagine life without each other

In case of any more snow days, there is a great selection of movies, documentaries and TV shows to watch on Netflix. Here are a few highlighted selections: If you would like me to review your service, product, restaurant, or travel destination, please send me an email at craig@bigdaddykreativ.ca or find me on “the twitter” at @BigDaddyKreativ

Netflix is the world’s leading Internet television network with over 86 million members in over 190 countries enjoying more than 125 million hours of TV shows and movies per day, including original series, documentaries and feature films. Members can watch as much as they want, anytime, anywhere, on nearly any Internet-connected screen. Members can play, pause and resume watching, all without commercials or commitments.

The Netflix Mother-Daughter Survey was conducted online by SurveyMonkey Audience on behalf of Netflix from October 28 – November 9, 2016. A sample of 10,143 women aged 18-65 in the US, UK, Canada, Australia, Brazil, Mexico, Spain, France, Italy and Germany were interviewed. The precision of SurveyMonkey Audience online surveys is measured by a margin of error. The margin of error on these results is +/-1% based on a confidence interval of 95%.