Visit Philly: Things to Experience in The City Of Brotherly Love! 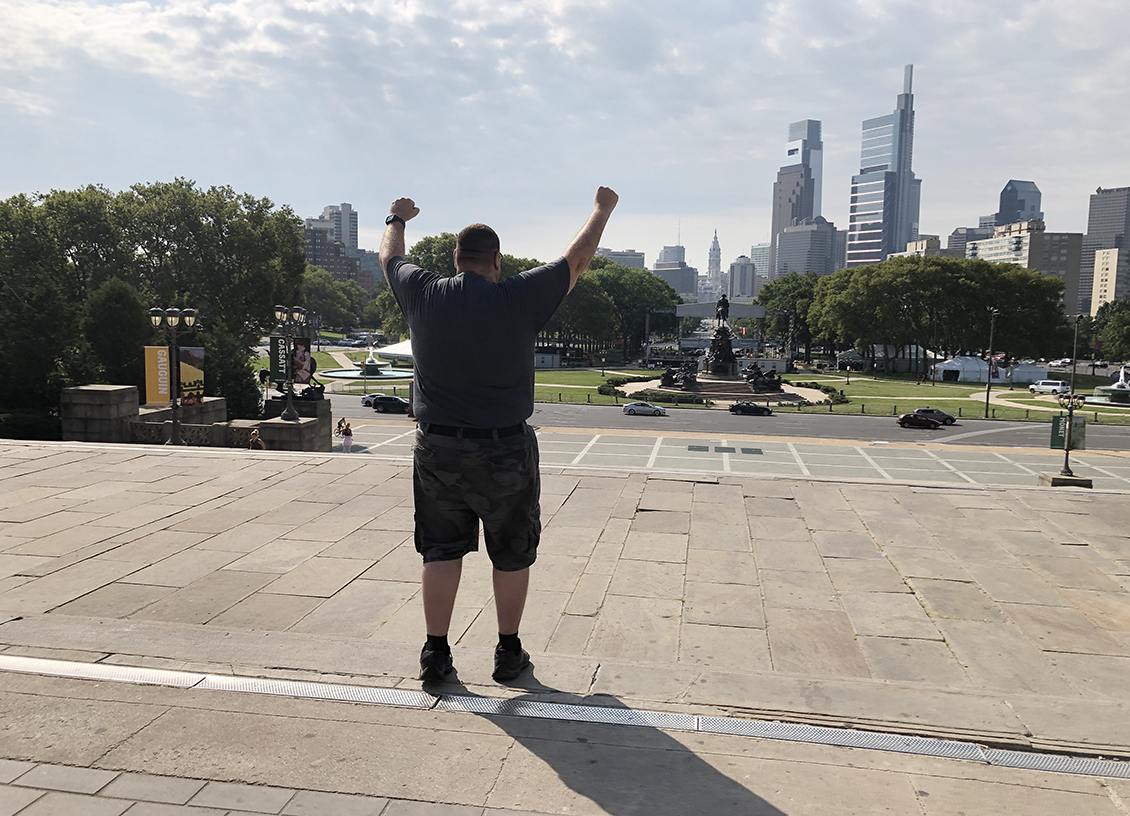 Disclosure: Media pass was provided by Visit Philly. All opinions are my own.

Philadelphia is known as the birthplace of life, liberty and the pursuit of happiness. With rich history, an awesome culinary scene, and vibrant nightlife, there are no shortage of experiences to keep you busy in the City of Brotherly Love.

Here are just a few memorable things to do on your visit to Philly.

Commissioned in 1752 by the Pennsylvania Provincial Assembly, the Liberty Bell is an iconic symbol of American independence. “Proclaim LIBERTY Throughout all the Land unto all the Inhabitants Thereof” is cast into the bell, which is a reference to the Book of Leviticus passage 25:10.

The bell first cracked upon its arrival in Philadelphia, and has been recast twice. Most historians believe it was one of the bells rung on July 8 to mark the reading of the United States Declaration of Independence.

The Liberty Bell once lived in the steeple of the Pennsylvania State House, now known as Independence Hall.

Pennsylvania State House served as the capitol for the Province and Commonwealth of Pennsylvania until 1799, when the state capital moved to Lancaster.

Independence Hall is listed as a World Heritage Site. 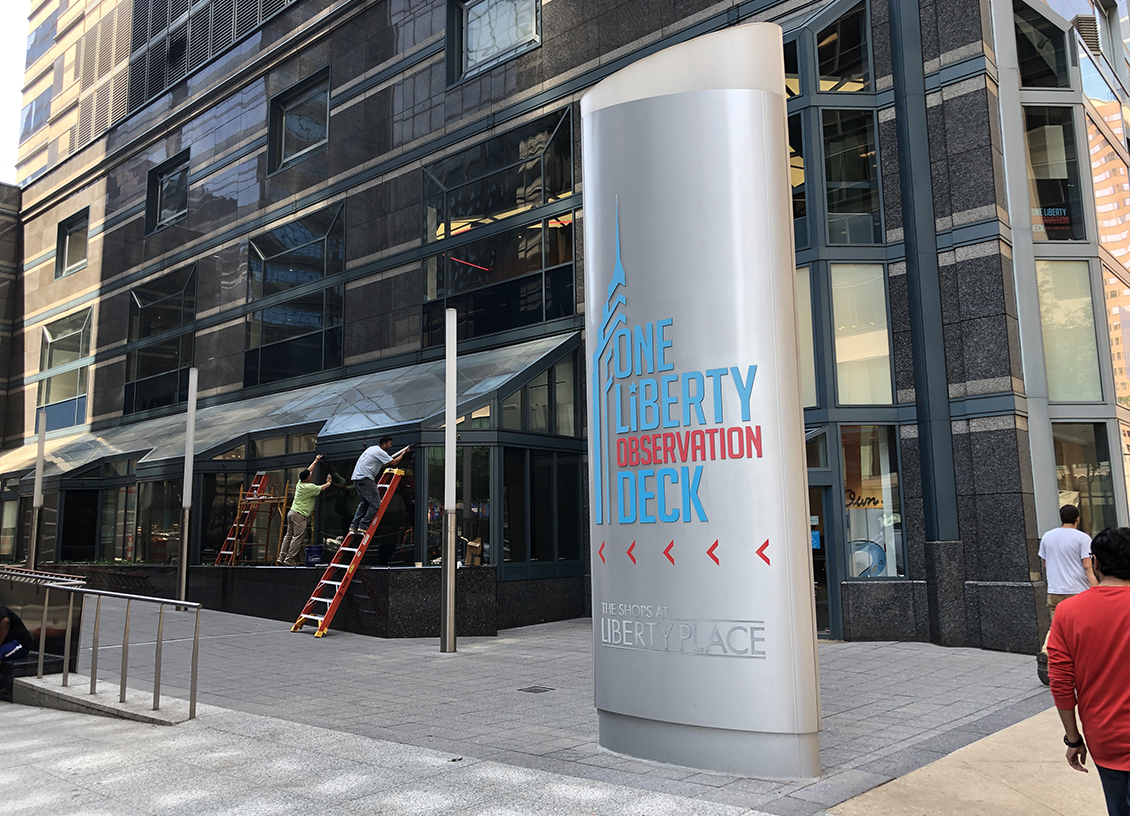 Located on the 57th floor of One Liberty Place, One Liberty Observation Deck offers the best views of the Philadelphia. The fully enclosed observation deck gives you 360 degree panoramic views of the city from 883 feet above street level. 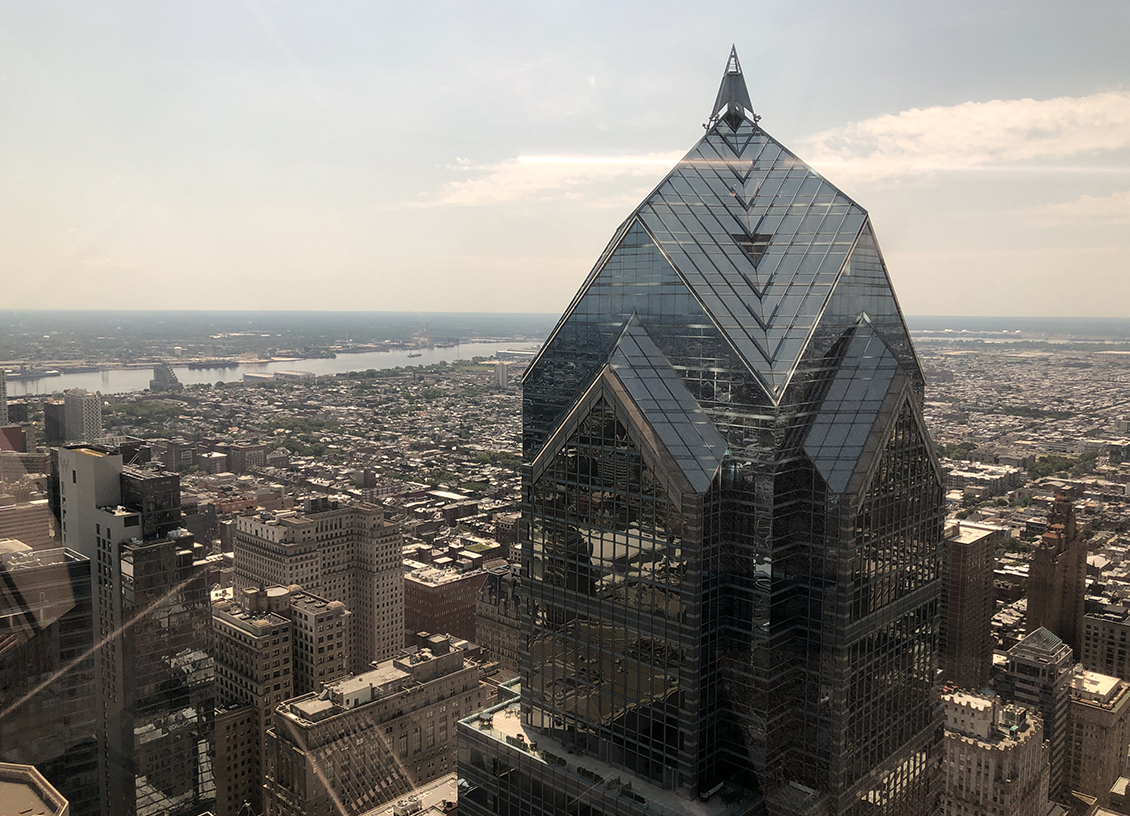 The observation deck opened to the public on November 28, 2015. As of 2016, “Philly From The Top” is the highest standing building attraction in Philly. 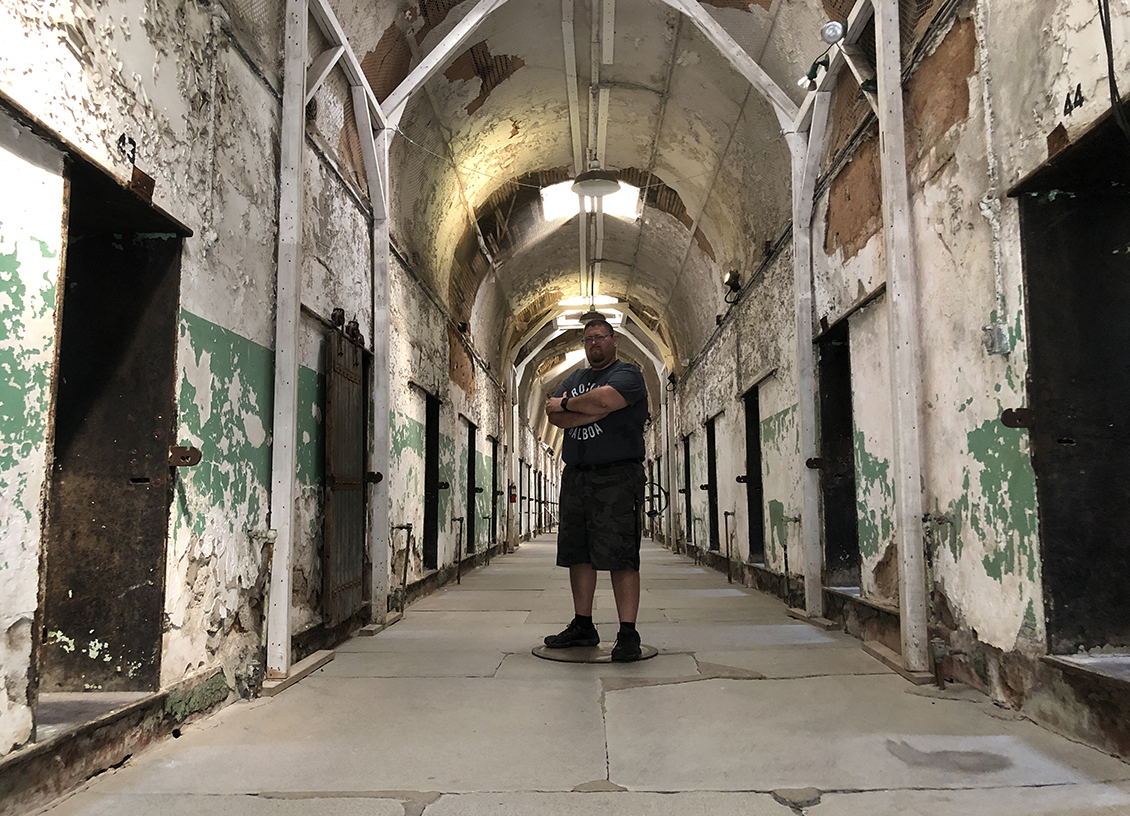 Stepping into America’s most historic prison is like stepping back in time. This haunting building is dimly lit, crumbling, and has a menacing facade. 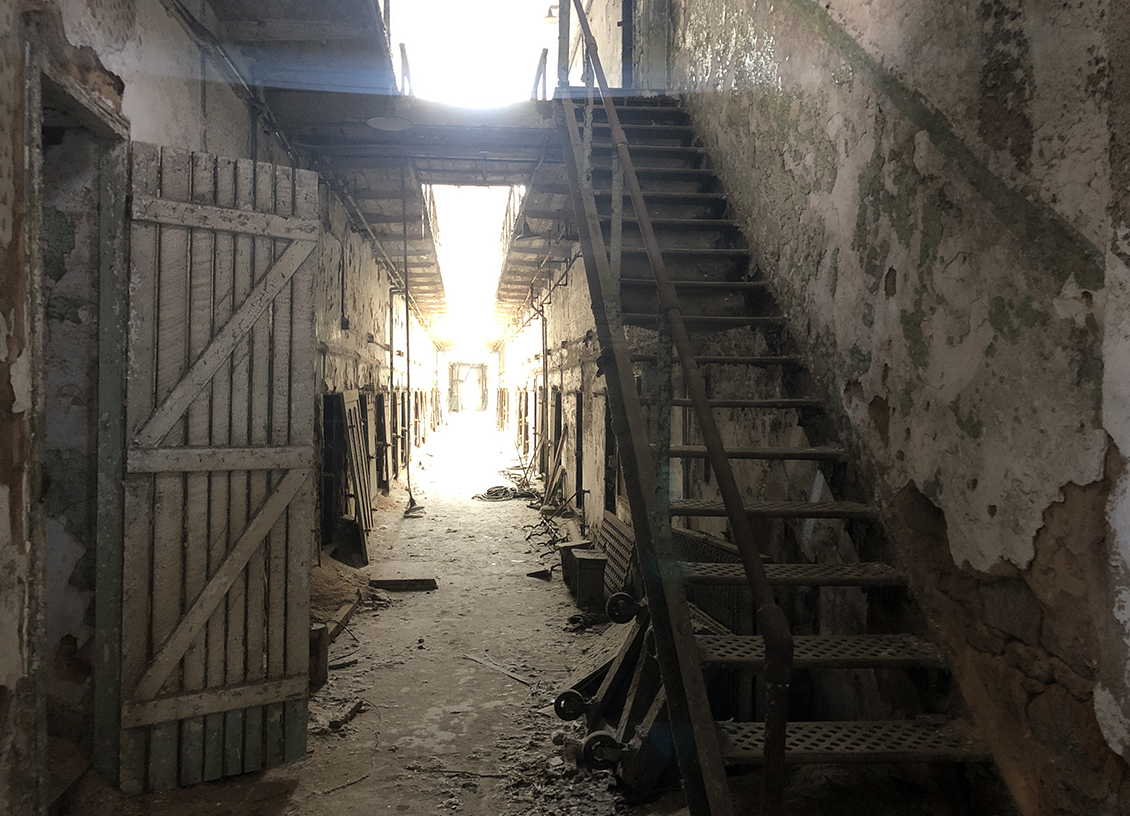 Once home to “Slick Willie” Sutton and “Scarface” Al Capone, Eastern State Penitentiary was largest and most expensive public structure ever erected in the United States. Due to the “separate incarceration” design and “reform over punishment” principle, it became a model for more than 300 prisons worldwide. Operational from 1829 until 1971, ESP had flushing toilets even before the White House. 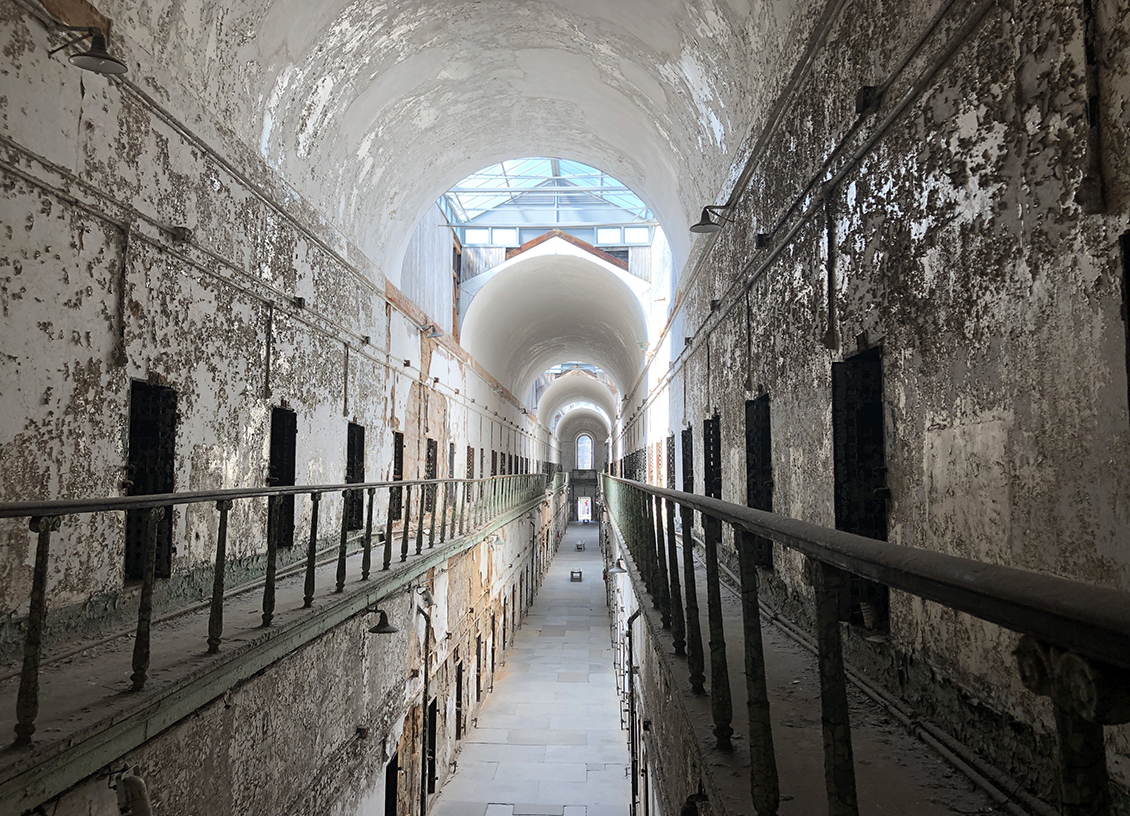 Now a U.S. National Historic Landmark, Eastern State Penitentiary is now open for self-guided audio tours every day of the year, from 10:00am to 5:00pm. 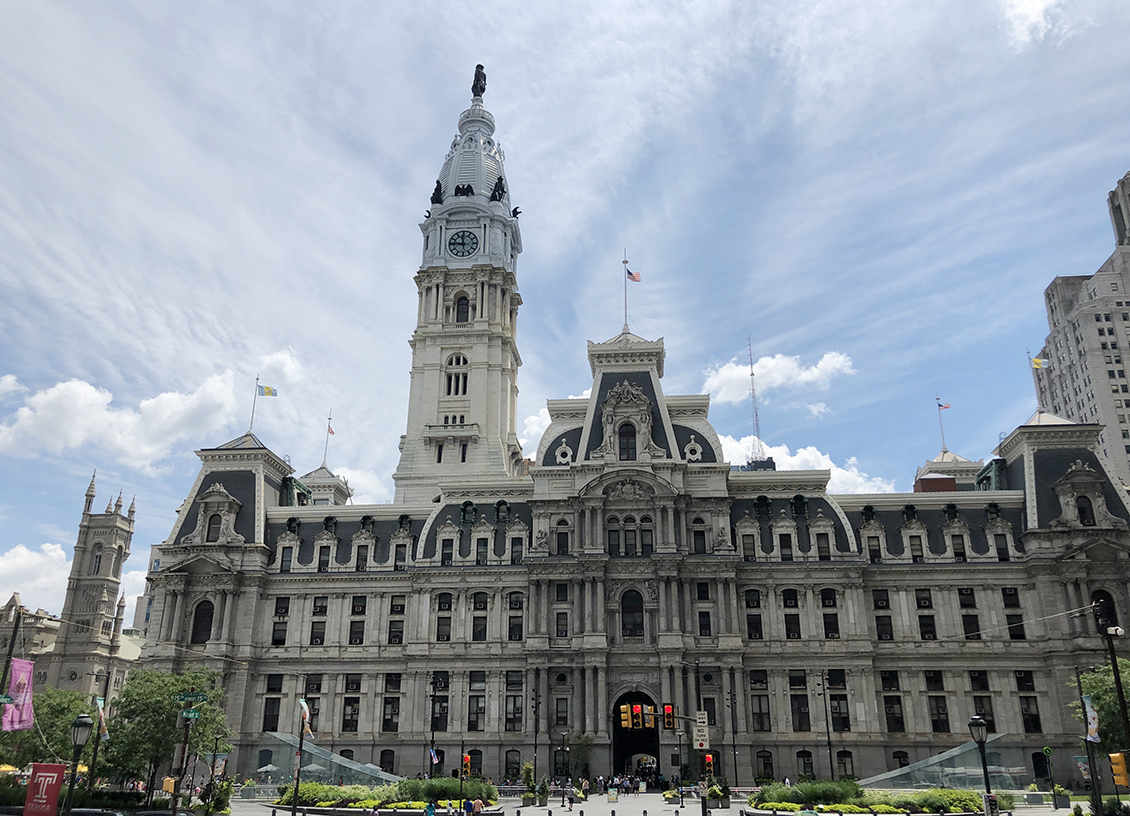 Located in Center City, Philadelphia City Hall is the seat of government for the city of Philadelphia, Pennsylvania. The building sits at 548 ft tall, which includes the statue of William Penn atop its tower. The exterior walls are made of limestone, granite, and marble.

Philadelphia City Hall was the word’s tallest habitable building from 1894 to 1908. It remained the tallest building in the city of brotherly love until it was passed by the construction of One Liberty Place in 1986. This ended the gentlemen’s agreement limiting the height of buildings in Philadelphia to no higher than the Penn statue. 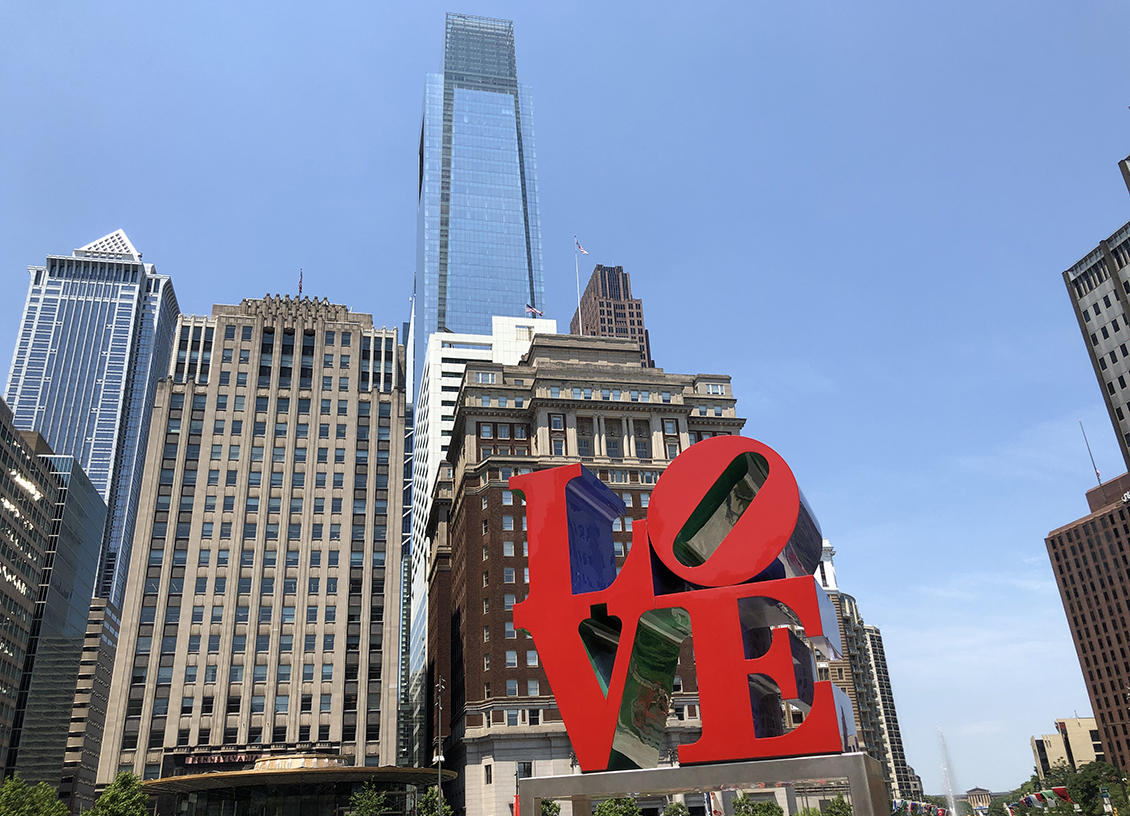 Located in Center City, John F. Kennedy Plaza is nicknamed Love Park for its reproduction of Robert Indiana’s Love sculpture. The sculpture was placed in the park for the United States’ Bicentennial celebration in 1976, but was removed in 1978. The sculpture was missed by many, so was bought and put back in the park the same year.

It now sits in the park, and is the backdrop for many memorable photographs. 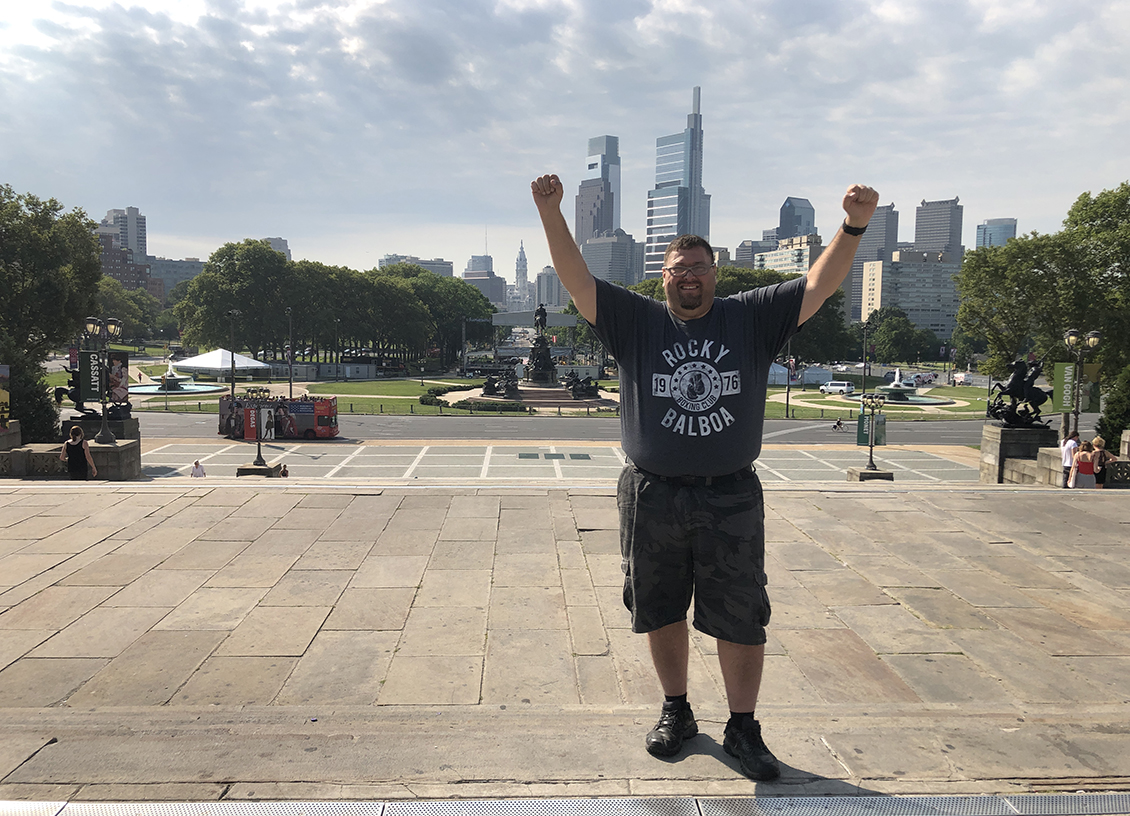 Ever since I saw Rocky III in 1983, I wanted to visit Philadelphia to see the bronze statue of Rocky Balboa. I had already seen the the previous 2 movies, but was quite young when they came out. The statue was so iconic, sitting at the top of the steps leading to the Philadelphia Museum of Art.

Later on in life, I gained a lot of weight, and found it hard to walk up my stairs at home. I needed to change my life. I worked hard over the past year to lose some weight, and get into better shape. I set a goal that I wanted to walk the Rocky steps at a fast pace, as I knew that running up them was beyond my physical capabilities. 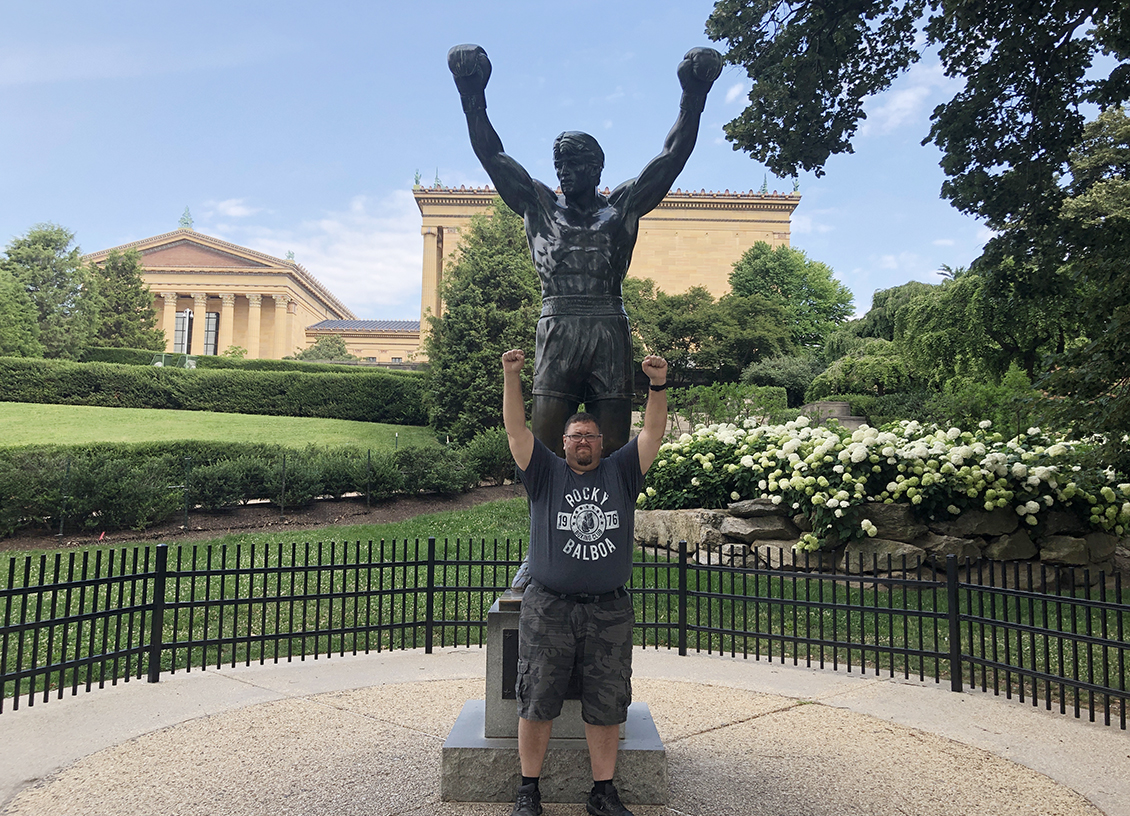 So I arrived in Philly, and visited the famed Rocky statue, now located off to the right at the bottom of the steps.

Next up, I did the steps! It was tough, and quite a hot morning (35C, 95C). I did not do them two at time like Rocky did, but I did it. Once at the top, I celebrated this victory, and knocked another item off my bucket list. 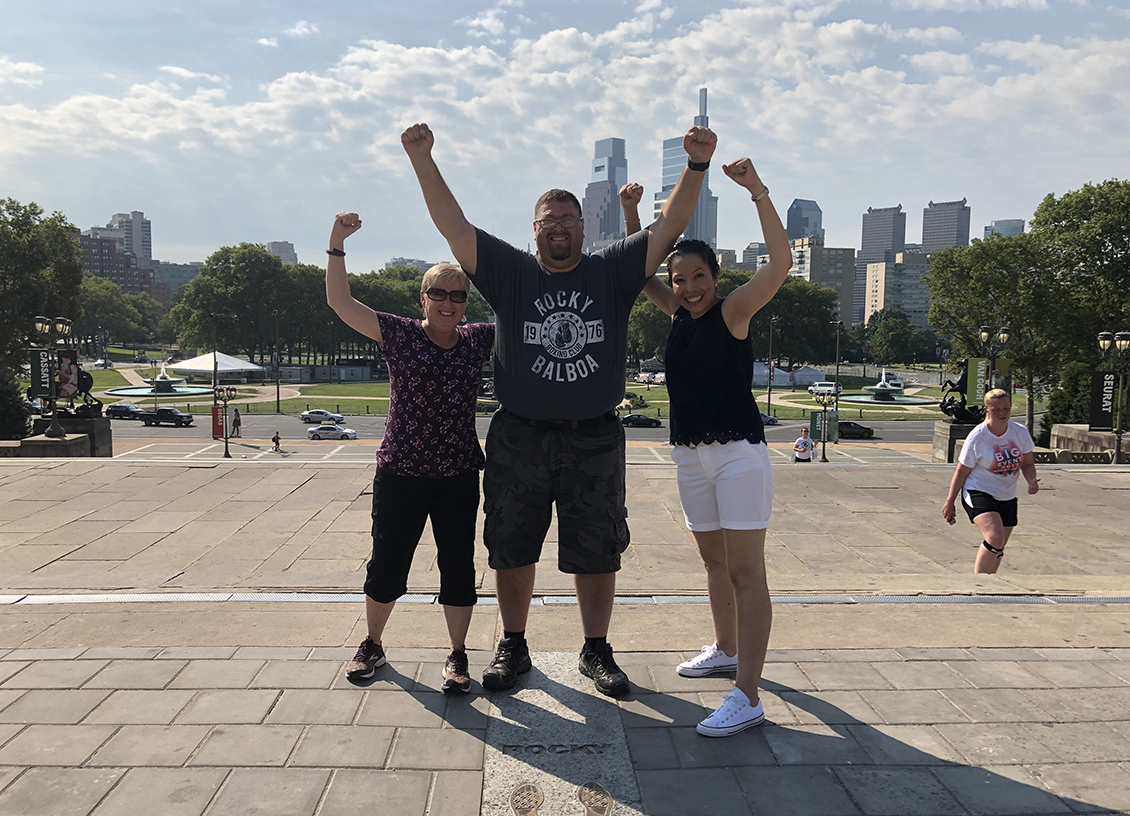 I wasn’t the only one. There were so many people out early in the morning to do the same thing – run the steps, and pose with the statue. These two ladies saw me conquer the steps, and loved the shirt I wore for the occasion, so they asked if they could get a picture with me. 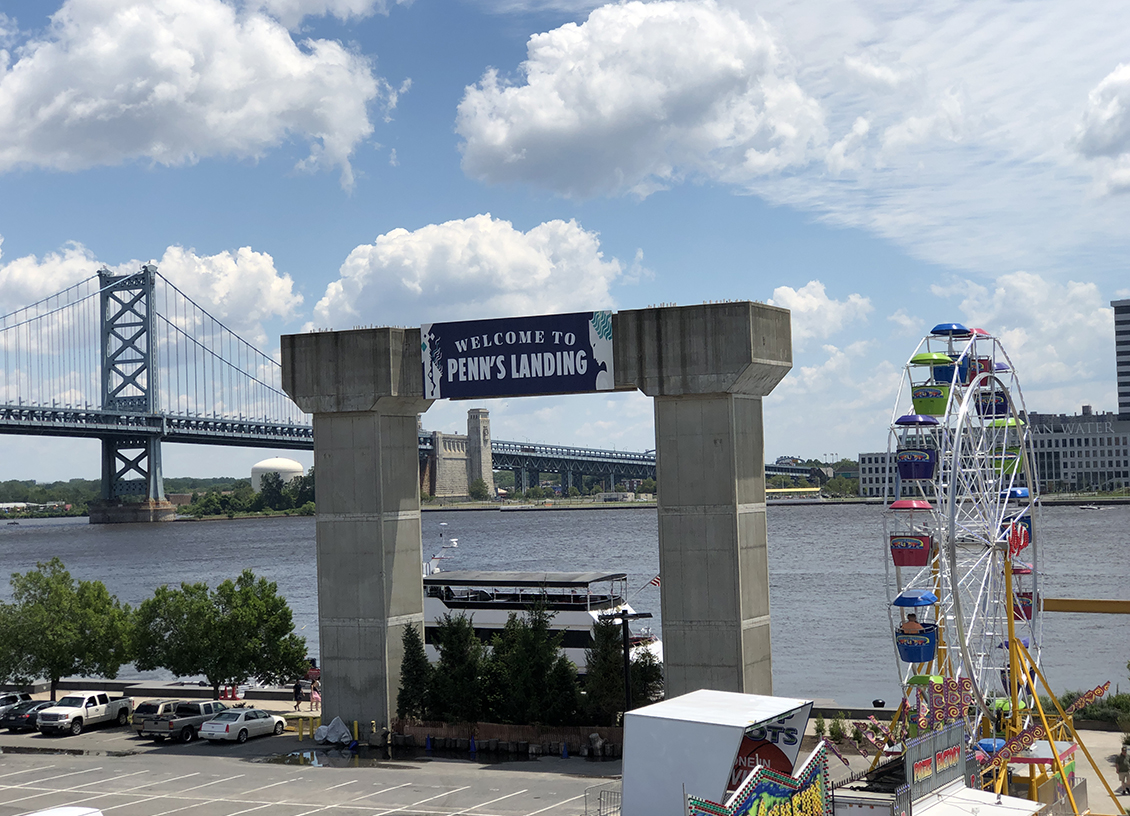 There’s Lots to Do In The City Of Brotherly Love!

There is so much more to see and do in the City Of Brotherly Love. If you are heading to Philly, be sure to check out these awesome spots. A great way to get around the city is PHLASH bus, Big Buss, Hop On Hop Off Tours, or the city transit SEPTA. The city is very walkable, and there is a bicycle ride share available for a reasonable fee.

Whatever you do and however you get around, enjoy all that Philly has to offer. it really is a beautiful city with lots to do!

How to Make Your Camping Trip More Thrilling

Travel Options While Still Under the Pandemic