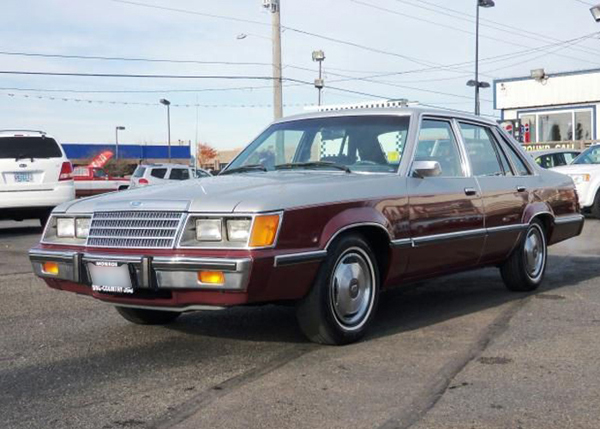 A lot of memories are tied to the vehicles you drive.

My first car was a silver and maroon 1984 Ford LTD. Not the big 8 cylinder, but the 6 cylinder that shared the same platform as the Thunderbird and Cougar. I bought it from my brother for $1500. It had a comfy interior and was in fairly good shape. I remember driving around with my friends, and more people wanting to come with us. Not a lot of my friends had cars at the time, so I was the “designated driver”. I loved to go camping with friends, and we would often pack up all of our camping gear and head to Wasaga or Sauble Beach. I was also DJing part time, and the space in the car was limited for my equipment. I don’t even have a good picture of this car, so the picture below was something I Googled. I quickly realized that in order for me to continue carting my DJ equipment around, I would need a larger vehicle. Minivans were popular at he time, so I started looking into those. I narrowed my choice down to the Ford Aerostar. I already had a buyer for the LTD, so I went minivan shopping with my Dad. We found one I liked at a small dealership in Toronto. It was a 1988 silver and grey model. I took it for a test drive and remember loving all the extra space. I bought it that day. I loved this van so much I bought mag wheels, low profile tires, light covers, installed fog lights, and a high end stereo system. This van cornered like it was on rails! It was the early 90s… and I had done stuff to a “family minivan” that was unheard of. I turned a it into a rockin’ ride. I made it cool. It was a real head turner. If you look closely, you can see my old LTD parked beside my Aerostar in the driveway I had a heated seat cover that I used to use in the winter. One morning after returning from an overnight shift at my security job, I was so tired I forgot to unplug it. I went inside, and went to bed. Several hours later, I went outside to get in my van, when I noticed the windows were darker than normal. I opened the door and gasped. The seat had caught fire. Everything was melted inside. I went inside to tell my parents. We called the insurance company, and they sent out an adjuster. He wrote the vehicle off. I was crushed. I had to look for another vehicle. After investing so much money on accessories for the Aerostar, it was a natural choice what I wanted.

I picked up a Truck Trader, and started looking for another Aerostar. I found a 1990 model at Cruikshank Ford. Again, my dad drove me out to see it. When I saw the van, I fell in love. It was black, with the lower rocker area painted a beige/gold color. It was an extended Eddie Bauer model. I bought it that day. Like my first Aerostar, I modded the heck out of it. High powered stereo, fog lights, light covers. Another head turner. One rainy day in Toronto, I was out with a friend. We were stopped at a traffic light. I remember looking in my rear-view mirror and seeing a full size van approaching at a high speed. I barely had enough time to yell to my friend “hang on”… we got rear-ended so hard, the recline on both of our seats broke. The back door was toast, and there was shattered glass everywhere, and my back was hurting like crazy. The insurance company did not write the vehicle off. I remember my insurance agent asking if I was okay, if I wanted to see a physiotherapist for my back. All I wanted was my van back, so I I said “don’t worry about me, just fix my van”. I look back now and wish I would have taken her up on the physio. When I got my van back, it just never felt right. I wanted something newer.

Again, I picked up an Truck Trader, and perused through the different minivans. I saw so many Aerostars that were well priced. I found one at local dealership. I went to see it… alone. I wanted to buy this vehicle without the help of my parents. As I pulled in, i saw the Aerostar that was advertised. I noticed a sales guy walking towards the van. He put a sold sign in the windshield. Crap. So I parked to see what else they had in stock. A GMC Safari caught my eye. I took it for a test drive and was impressed by how it handled. I bought it. I loved this van… it had all wheel drive, so in the winter, it cut through snow like a hot knife through butter. I met my wife-to-be Wendy while I had this van. I knew she was the one I wanted to spend the rest of my life with. I ended up selling this van (and my bass guitar and amp) to buy Wendy an engagement ring and put money down for a house.

I purchased a 1990 Chevy Blazer to save some money. We ended up spending so much money on repairs the first 2 months, we quickly traded it in for our next vehicle. Wendy and I purchased our first vehicle together… a 1998 Plymouth Voyager. We used this for a couple years without any problems. Then in the Spring of 2003, the transmission blew. We repaired the transmission, but then little by little, other things started to go wrong. We had just bought Wendy a car, and were not prepared to buy another vehicle… but we had to. We picked up a 2000 Chevy Tahoe. My first real “truck”. This thing drove like a tank! I loved it! Wendy’s Mom gave us her old camper trailer, so we got to go on many camping trips with this truck. Lots of great memories. The Tahoe was starting to get up there in mileage, so Wendy and I decided it was time to upgrade. As we had been completely happy with the Tahoe, we figured we would stick with a similar vehicle, one that could pull our camper trailer. We picked up a 2005 GMC Yukon XL. This was the extended model, so a bit more room in the back for storage when we travelled. A year later, we upgraded our camper trailer to a 2010 Coleman Bayside. The Yukon pulled this with ease.

So if you read my last blog post, you’ll know the sequence of events that lead to this post. I always jump 2 feet in to any project I am working on. I had made the decision before I even started with Ford that if I got the position, I would sell my GMC truck, and buy it’s Ford equivalent. Now I loved my truck, so I was in no hurry to just give it away for a low price, or sell it before I found something I loved.

I started driving around to local Ford dealerships, looking for an Expedition… but not just any Expedition, I wanted the Expedition Max. I am a bit picky when it comes to colours. My first choice was black. I pulled in to Kennedy Ford in Oakville. They had a regular Expedition sitting out front… but it was white. I’m not a fan of white, but I figured this would give me a chance to see the vehicle and it’s options. As I was checking it out, a salesman named Nassem Abdulahad came up and asked how I was doing. Now I’m all about first impressions, and not being pressured into buying something. Naseem was very laid back and answered all my questions. He listened to what I wanted. After grabbing the keys so I can see inside, he knew this was not the vehicle I wanted. So we went inside where he asked the General Sales Manager, Rick Grainger, if he knew of an Expedition Max coming in off lease. The answer was yes. My response was “sweet… is it black?” The answer was “yes, with gold trim, and it is the King Ranch model”. I had mentioned to them that the last Ford I owned was the same colour. They told me more about the vehicle and it’s history. The family had purchased it 2 years earlier from Kennedy Ford, and has bought all of their vehicles there. The vehicle they were buying had not yet arrived. I put a deposit down without even seeing the vehicle. That was on the Saturday.

I listed the Yukon for sale on the Sunday afternoon. It sold on the Monday. I called Kennedy Ford and told them. Here’s where I tell you about amazing customer service. The other customer’s vehicle was being delayed. They knew they had a buyer for the Expedition, and did not want to disappoint either of us. So they purchased the exact same vehicle from another dealership, and had it brought in on the Friday. I got the call early Saturday morning that the Expedition was in. So Wendy and the girls came with me to see it.

It was better than we expected. We took it for a test drive. It drove so smooth. We got back to the dealership and signed all the papers. It was ours.

We picked up the new truck this past Friday morning. I drove it home, and parked it beside my Yukon. The people who bought the Yukon showed up just before noon to pick it up. After going over all the paperwork with them, they hopped in and drove away. As they were driving away, my youngest daughter (who was standing beside me) walked over to Wendy and she was balling! I walked over and asked what was wrong. She said “I am going to miss Daddy’s truck. I picked her up and said “I know. I will too. A lot of great memories. But we will have great moments with the new truck too.” and I opened the driver’s door, and sat her down in the driver’s seat. “How’s that Lauren?” Her tears stopped… but mine didn’t. I was going to miss the Yukon too, but I was looking forward to creating many new memories with the Expedition.

This is my 2010 Ford Expedition Max King Ranch. Here are a few more pictures of my previous vehicles:

What Are Your Next Steps After A Vehicle Accident?