My girls love watching cartoons on @Netflix_ca that I watched when I was a kid! #StreamTeam 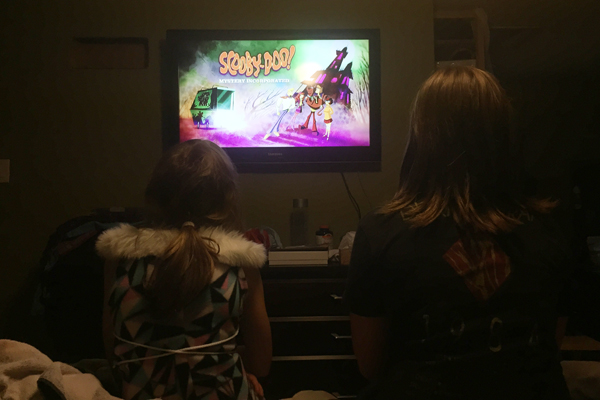 One of the thing’s I love about the modern age is the availability of the cartoons and shows I used to watch as a kid. Being able to watch them with my kids, and seeing them enjoy them as much as I did when I was their age is awesome.

Last month, I introduced you to the #Newstalgia movement by Netflix. This month, I want to drop a few interesting stats from a recent survey.

So what classic TV shows are dads passing down? Alvin and The Chipmunks, Scooby Doo, Spider-Man, The Smurfs and Transformers are Canadian dads’ favourite shows to watch on Netflix with their kids.

There is a fantastic selection of classic cartoons and TV shows available on Netflix. And even though it hurts a little to call these “classics”, it is awesome that they are so readily available for my kids and I to enjoy.

The girls have a routine. They come home from school, empty their lunch bags, do their chores, and if the weather is good, they go outside to play. If it is not, they watch tv. If the latter, they select Netflix and watch their favourites. This month, I said, “hey you two… wanna watch a few cartoons Daddy used to watch as a kid?” Of course, they were excited.

We flipped on Garfield. “Hey, it’s the orange fat cat!” The survey asked dads what shows they’re most looking forward to passing down:

• Dads in the U.S. ‘Go, Go Gadget Go’ for Inspector Gadget
• Tom and Jerry earned the top spot among dads in Brazil
• British dads are loyal to Danger Mouse
• Canadians find the Smurfs…well, Smurfy
• Asterix is king with French dads
• Dads in Germany have a soft spot for Pippi Longstocking
• Mexican dads favor the Pink Panther

But not all dads are created equal:
• Dads in the U.S. are most likely to let the kids stay up late
• Brazilian dads take pride in making the best snacks
• British dads let the fun of watching together extend even after the show is over
• Canadian dads give themselves the most credit for liking the same shows as their kids
• French dads think they choose the coolest shows
• German dads rank themselves among the top snugglers and silliest viewing partners
• Mexican dads say they let their kids be king of the remote

Dads aren’t the only ones that are introducing new shows. Moms use TV shows to teach life lessons, and are driven by memories (84%), and the familiarity the show brings (78%). Moms love to pass down shows as well… Care Bears topping that list. Moms are also suckered into watching shows their kids watch (77%). To be completely honest, I watch some of the shows my girls do… it’s all part of spending time together as a family. In the end, 87% of moms enjoy watching their kids snuggle up to the other parent for TV time.

Well, there ya have it. Happy streaming!

About the Netflix Kids Offering
Netflix has a dedicated section for kids under 12 years old featuring dozens of original series for kids as well as TV shows and movies from great partners like PBS, Disney Channel, DreamWorks Animation, Mattel, Hasbro, Lego and Scholastic, all in a commercial free environment. The dedicated section for kids is available across a broad range of devices including PCs and Macs, iPads, game consoles, streaming devices and smart TVs. Members are provided a kids profile upon sign up and can customize additional profiles for their kids. The kids experience features a character bar where you can find a deep selection of great TV shows and movies featuring that character. Kids, parents and caregivers will also be able to scan through row after row of movies and TV shows organized by easy-to-understand genres like superheroes, princesses, dinosaurs and girl power, featuring clear and simple descriptions of the plot of each title.

About Netflix
Netflix is the world’s leading Internet television network with over 62 million members in over 50 countries enjoying more than 100 million hours of TV shows and movies per day, including original series, documentaries and feature films. Members can watch as much as they want, anytime, anywhere, on nearly any Internet-connected screen. Members can play, pause and resume watching, all without commercials or commitments.

About the Research
*The external survey was conducted online by Ipsos Public Affairs on behalf of Netflix from April 8 – May 8, 2015 among a sample of 7,009 parents age 18 and over, including respondents who stream TV shows/movies with their children from Brazil, Canada, Mexico, UK, Germany, France, and the US. The precision of Ipsos online polls is measured using a credibility interval. In this case, the poll has a credibility interval of plus or minus 3.5 percentage points for all parents.

We’re Hair for You: Treating These 3 Usual Hair Problems

The Desert Rat: The Outfit That Will Turns Heads