Be professional: How not to quit your job 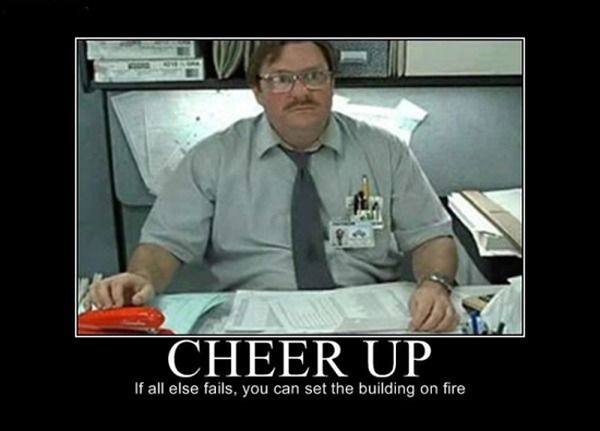 I love Office Space. It pretty much summed up an office where I once worked at. At first, he was quite excited to go into the store. It was his first job. I still remember how excited he was. I would walk in, and he would be so proud of the displays he made. His love and passion for his work would shine through. But, it did that in all that he did.

That was no longer showing when he said at the time “I have to work tomorrow.” The kicker came when his manager told him on a Friday night that there would be a vacation black out period from then until December 31st (3 months). The unfortunate part was, he was just about to submit requests for 2 weekends (one for our Fall youth group retreat), and a 4 day stretch for a family vacation. This clearly frustrated him. The manager was not the nicest person in the world, nor were they a good manager (from what he told me, and from what I witnessed when I shopped at the store). She didn’t treat her employees with any respect, and would often belittle them in front of customers. They worked in a commission environment. The manager would often switch the salesperson code on a sale he made to her own code instead of his, because she had said “hi” to them when they walked in, so she would get the commission. Even though he helped the customer the entire time, and helped select clothing that would suit them. Corrupt management to say the least. Something had to change.

It was time for the “how not to quit your job” talk. If you are unhappy with your job, do something about it. It is your choice whether you stay at a job that is not a healthy fit for you. There are opportunities out there if you look hard enough. I worked at a job for 12+ years where I absolutely loved what I did, but didn’t like where I worked. It was a toxic environment full of fake people. But I stayed. I had a family to support, and a mortgage to pay.

I could have left, but I didn’t. It was a steady paycheck, and I didn’t want to just leave, and be on the hunt for a job.

When one door closes…

In October 2010, my position was eliminated from that job, and I was sent home. I didn’t get to leave on my terms… but I could have. I waited too long. I got comfortable in a bad situation.

After going through a bit of depression (for losing my first job) and wondering what to do next, I started to build my own brand. 18 months later, I found a job I love, and led a fantastic team of community managers for a very large brand for 6+ years.

So back to my conversation with the young lad in my senior youth group. He was clearly frustrated, and had been for some time. There was only one way to solve this. Leave.

I gave him the best advice I could have given him. “Always leave on your terms. Not theirs.”

So what did he do? He gave his two weeks notice on his next shift. It was the right thing to do. To say I am proud of him is an understatement. He did what I knew he would do… left with integrity, regardless of how frustrated he was. It wasn’t a time to try and tell his side, as the manager was clearly set in her ways, and not willing to listen to anyone else.

That manager was let go about 6 months later.

How not to quit your job

This one popped onto my radar this morning. It already has 25,500 views on YouTube. I’ll let you decide on whether this was a good way to part with an employer…

Now, let’s forget about the comedy factor of this one, because, let’s face it, it is damn funny! But, what are the ramifications of her actions? Remember, this was on live television. It was recorded on someone’s smartphone and posted on YouTube. It has over 5 million views.

There are lots of examples like this. Here are a few more beauties…

Have you ever quit a job you loved, or hated?

I have had quite a few jobs over the years. Lots of part time gigs for supplemental income. In my mid 20s, I even worked at a gas station for 4 weeks after Christmas one year to help pay for a large credit card bill I had racked up. I can’t say I have ever left a job as dramatically as this though. Well, there was that food fight at Burger King… Have you ever had the urge to yell out your feelings and just quit? Have you ever left a job you loved, and still have a solid relationship with your former employer? Have you ever said “screw it, I’m just not going back!”. Have you ever chased a new passion, such as leaving work to go to one of the best international medical schools for Canadian students or to chase a career on the stage?

Why Go for a Furnished Apartment?

The Secrets to An Amicable Split That Will Benefit Your Kids