This One’s For You, 2015 Ford Mustang Critics 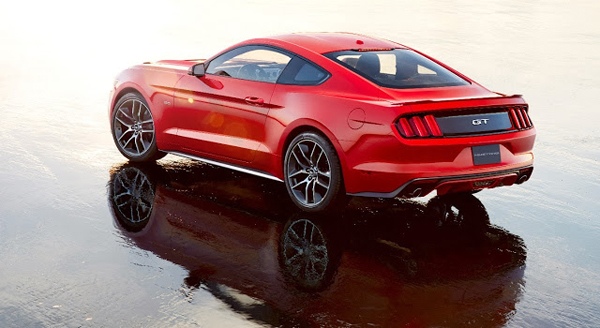 On December 5th, Ford unveiled the all-new 2015 Mustang. Subject of countless rumors and speculations for what seems like forever now, the blue oval’s legendary muscle car was without a doubt one of the most anticipated cars of the year.

While some people loved it, others showed a lot of hatred towards the Mustang on social media. “Not worthy to wear a Mustang badge”, “abomination”, “flop”, and many more unflattering comments were made. Since the launch, critics are everywhere… and loud.

What I’ve seen so far has inspired me to write the following blog. This one’s for you, 2015 Mustang critics.

First, let me say that what you’re about to read has absolutely no intention of starting a superficial debate based on looks and on perceptions of the car. Beauty is in the eye of the beholder, after all.

On top of the 2015 Ford Mustang’s critics list is the following argument: “No real muscle car can be powered by a four cylinder engine. The 2.3-litre EcoBoost engine should never be in a Mustang!”

If you look at the facts, it’s a genius idea for the following reasons:

• The arrival of the EcoBoost mill, which theoretically offers better fuel economy compared to the V6 and V8 options, opens the door to a whole new Mustang market in North America. Buyers who have always dreamed of owning one, without being able or willing to pay a little extra at the pumps, will now jump all over it.

• The European factor… and this one is huge. Did you know that for the first time since the car’s initial launch, our friends of the Old Continent will be able to buy a Mustang? See, they are heavily penalized for having cars with higher displacement such as V6’s or V8’s. As a result, sales of the Stang are likely to raise through the roof.

• The Mustang’s new EcoBoost engine will offer similar or even better performance than the base V6. The latter is likely to disappear over the years, as gas prices are likely to continue rising.

• The arrival of the four-cylinder engine is making many purists and old school muscle car lovers cringe, but there is no reason to panic. After all, the V6 and legendary 5.0 engine will be back for duty. The latter has been improved, thanks to some Boss 302 internals. Does anyone see a reason to complain here? I don’t.

Design: Too much Euro and not enough reminiscent of the Mustang’s past?

The second most popular complaint regarding the 2015 Ford Mustang points to it’s design. Again, beauty is in the eye of the beholder. But comparing it to a Mazda6 and various other Japanese cars or calling it a two-door Ford Fusion? That’s anything but accurate.

You might not know this, but the 2015 Mustang is the only vehicle in Ford’s lineup to use a unique platform. In terms of size, the new Mustang’s major dimensions are very similar to those of the outgoing car. Wheelbase and front track are identical, while overall length is essentially unchanged. The new Mustang then goes its own way, sitting 1.4 inches lower and 1.5 inches wider than the previous generation.

What does it mean? This baby will stick to the ground and handle with the best of them. And don’t forget about that independent rear suspension…

In the looks department, I think there is no need to have a Ph.D. in automotive design to see that the Mustang is much more modern looking. Is it enough to say that Ford has forgotten its glorious past? Absolutely not! Here are three design elements bringing us back into memory lane:

Mach 1 Style Lights In The Back I won’t push this argument further, as I think that I’ve made my point – and because I don’t want to turn this blog into a design analysis.

So… Is the Mustang denying its past? No, au contraire. It’s standing on top of the world, telling everyone “I’m not living in the past anymore – Just using what I’ve learned to propel myself into the future.”

This brings me to the next point. The future.

A Baby Boomer thing no more

As you’re reading this, the vast majority of Mustang buyers are baby boomers. I have absolutely no problem with this, but here’s a reality check: This generation will continue to age and, at some point, won’t be able to drive cars like the Mustang. For Ford, this means that a hunt for a new generation of Mustang buyers is on.

This new generation of Mustang buyers most likely grew up fantasizing about 90’s Japanese cars like the Toyota Supra and Mazda RX-7, or German beasts like the BMW M3.

I’m positive that everything that was done with this car had one goal: get in the head of my generation, the Y’s. A generation who will see its purchasing power greatly increase over the next few decades. This is where tomorrow’s money is, ladies and gentlemen.

Renewing its fan base has been one of the reasons why the Mustang has been so successful over the years. The 2015 Mustang surely follows that route. Way to think 10 years ahead, Ford!

I sincerely hope that what you just read opened up your mind if you are (or were) a 2015 Mustang critic. You may not like the car as it is, and that’s fine – I respect your opinion. But the facts are there: the new Stang is a GREAT business decision, no matter how controversial it may be at the moment for some.

Let’s end this post with a classic Henry Ford quote:

“If I had asked people what they wanted, they would have said faster horses.”

Feel free to share your thoughts in the comments section below.

Hi, I’m Marc-André... a father. husband and hardcore car enthusiast. After obtaining a bachelor's degree in communications and marketing, I had only one thing in mind: working while living my passion for cars. I quickly found myself as a news writer for one of the biggest automotive websites in Canada, covering everything that was happening in the auto industry. As well, I assisted at Canadian auto shows, and tested my fair share of cars along the way. While doing this, I got the chance to get up close and personal with Ford products and get to know all the great people at Ford Canada. A great relationship was born!

Proven Ways to Run Your Business from Anywhere in the World