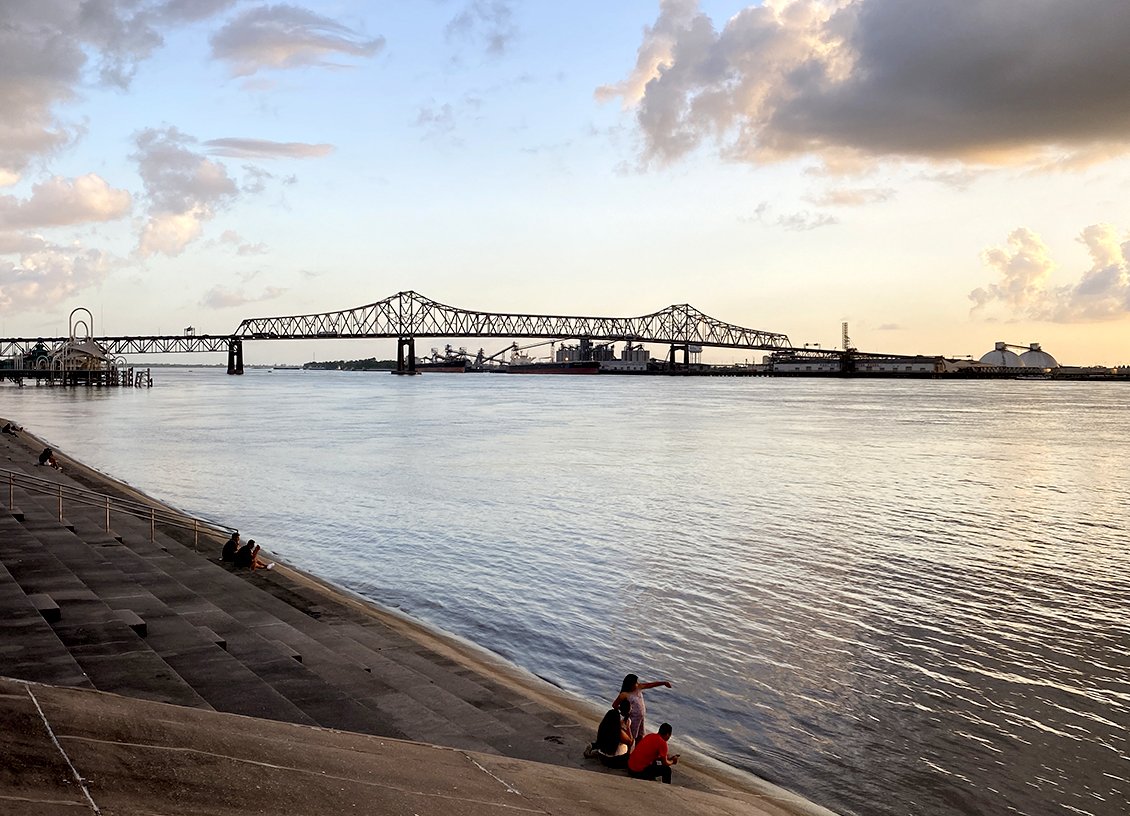 If you’re headed down the Mississippi into Louisiana, don’t forget to include a visit to the state capital. There’s plenty to keep you busy in this beautiful Louisiana city.

Here are 10 fun things to experience in Baton Rouge: 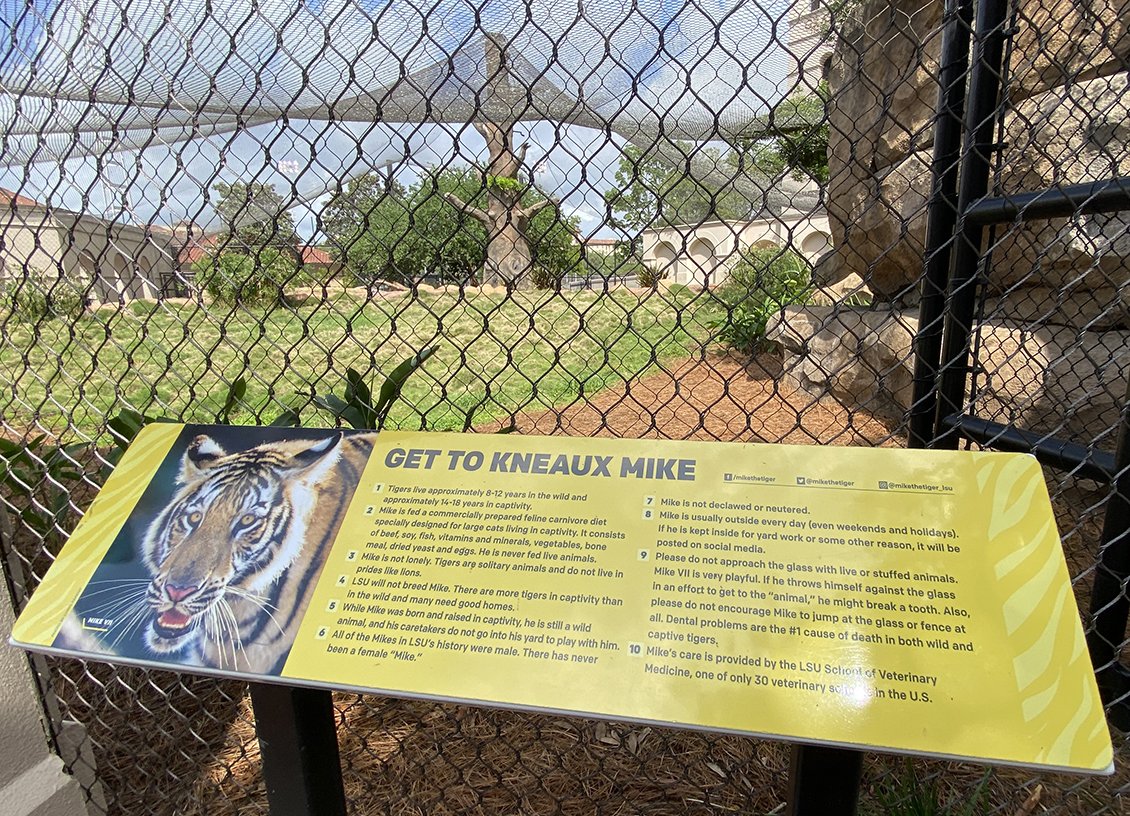 The famed LSU Tigers have had a live mascot since 1935, named after the athletic trainer who originated the idea: Mike Chambers. Since then there have been 6 more ‘Mikes’. The LSU live mascot is one of the most popular mascots in college sports. 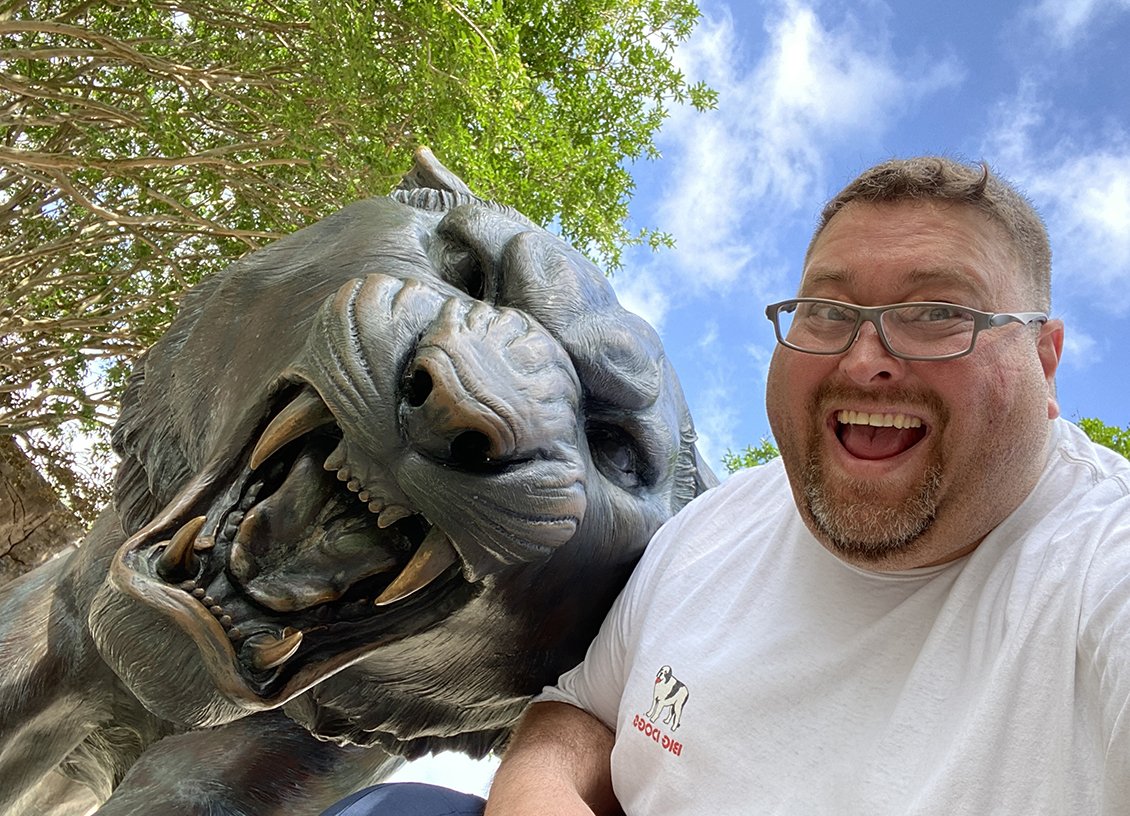 You can see Mike VII, a Siberian and Bengal tiger, living in his 15,000 square foot environment. 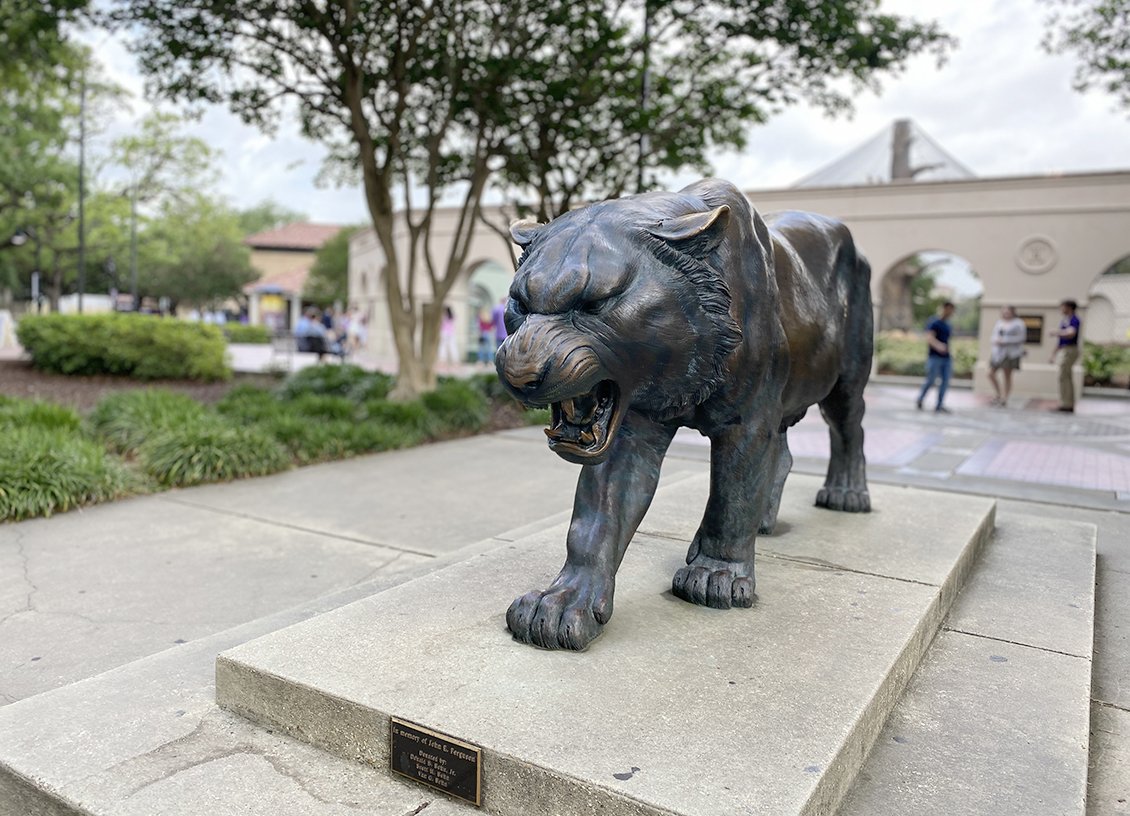 LSU hopes that by caring for these rescued tigers they can draw attention to the problem of illegal and irresponsible breeding and importing of wild animals. 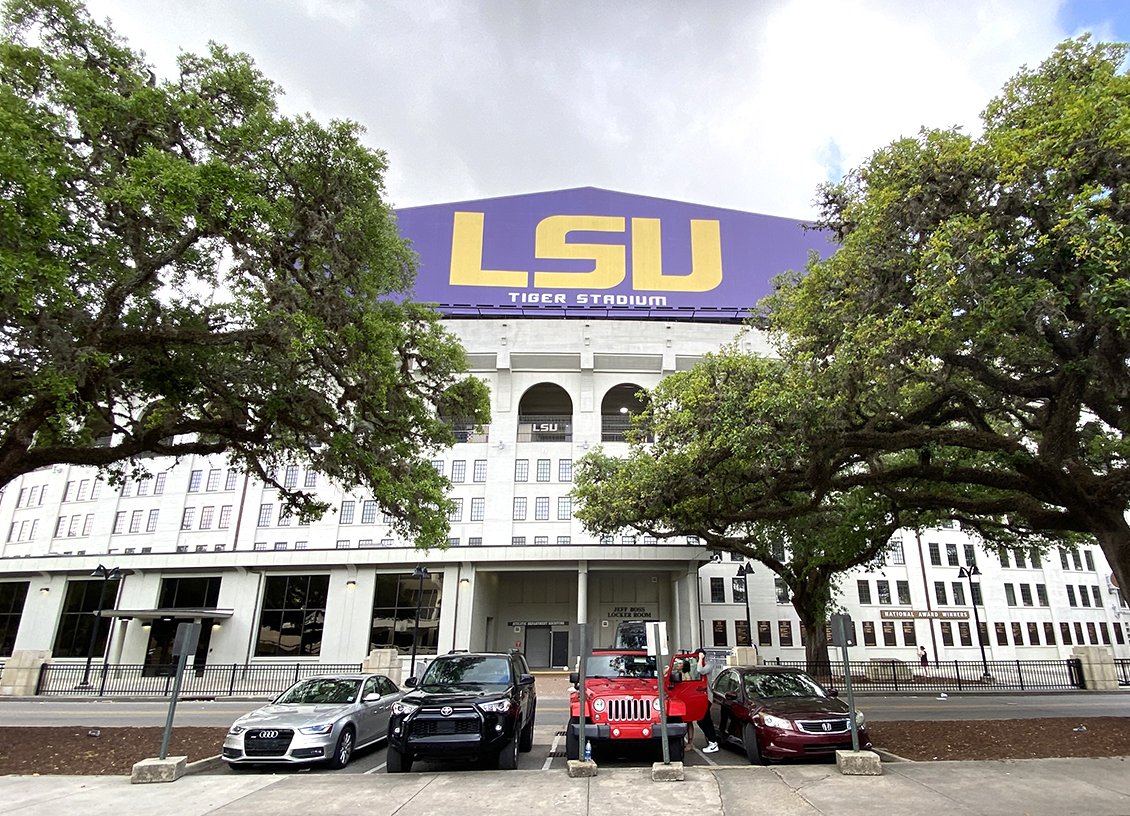 While on campus, you have to see Mike’s stadium! Nicknamed ‘Death Valley’ because of the intimidation visiting teams experience, it holds over 100,000 screaming Tiger fans! The stadium itself is impressive, with its iconic wrought iron gates and massive size. Even if you’re not a fan of LSU, it’s worth a visit just to see this historic place. Who knows, you might even get caught up in the excitement and become a Tigers fan yourself. It’s well worth the visit, especially if you can get tickets to a live game. 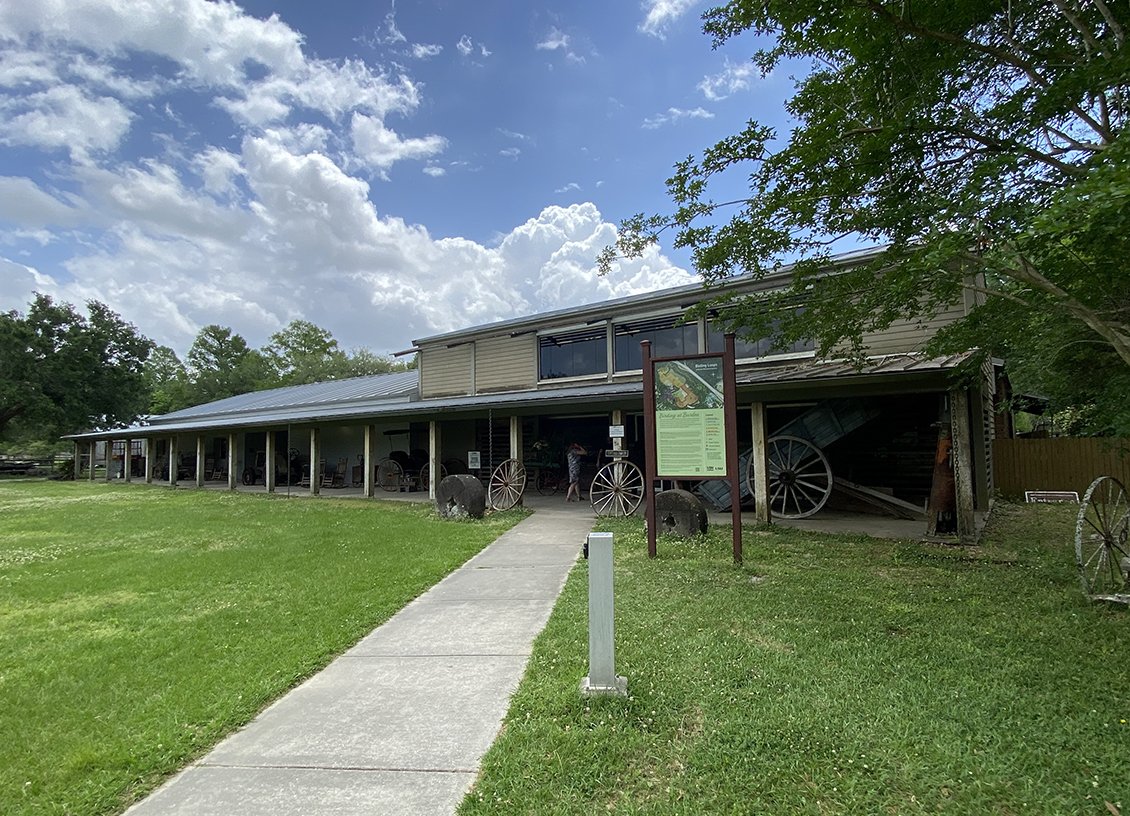 The LSU Rural Life Museum, a working plantation before and after the Civil War, depicts farm and plantation life of the 18th and 19th centuries.

There are over 30 historical buildings on site, including slave quarters, a schoolhouse, and a blacksmith shop. It was interesting to see how different life was back then. Everything was done by hand, from farming to cooking. 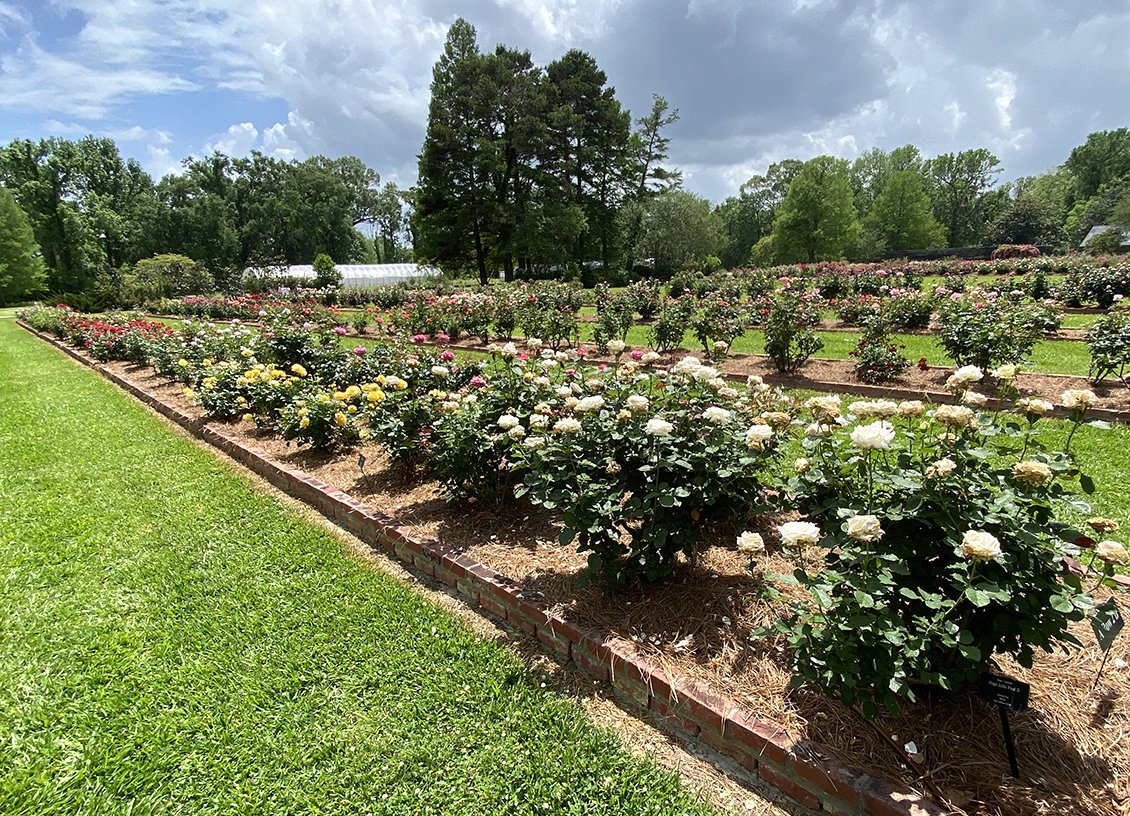 It also includes Windrush Gardens, where you’ll find tons of live oaks and very old crepe myrtles, as well as other flowering plants. It’s a beautiful place for a stroll.

I learned so much about the history and culture of rural Louisiana at LSU Rural Life Museum & Windrush Gardens. If you are in the area, I highly recommend a visit. Be sure to check out the exhibits outside as well. 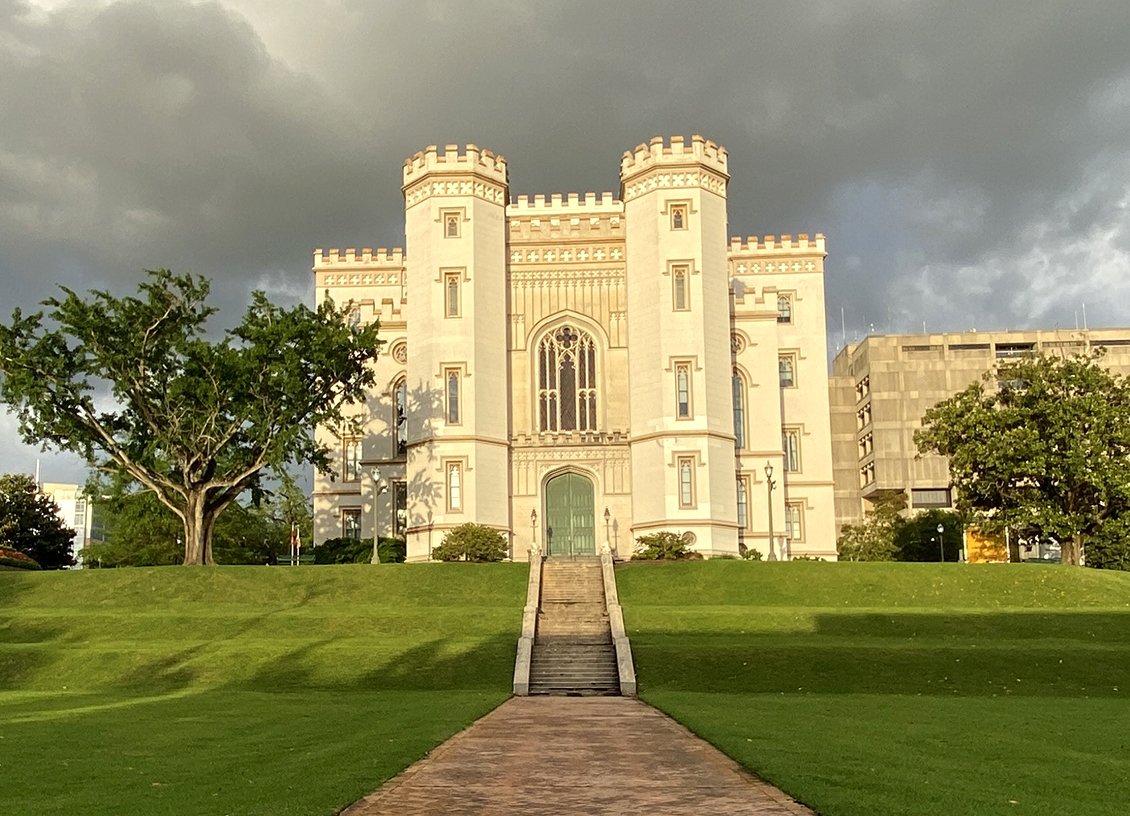 The Old State Capitol in Baton Rouge is steeped in history, and is one of the most interesting and unique buildings in Louisiana. It was built in 1847, opened in 1850, and it served as the state capitol until 1932 when the new state capitol was built. It was the scene of many historic events, including the secession of the state from the Union in 1861. 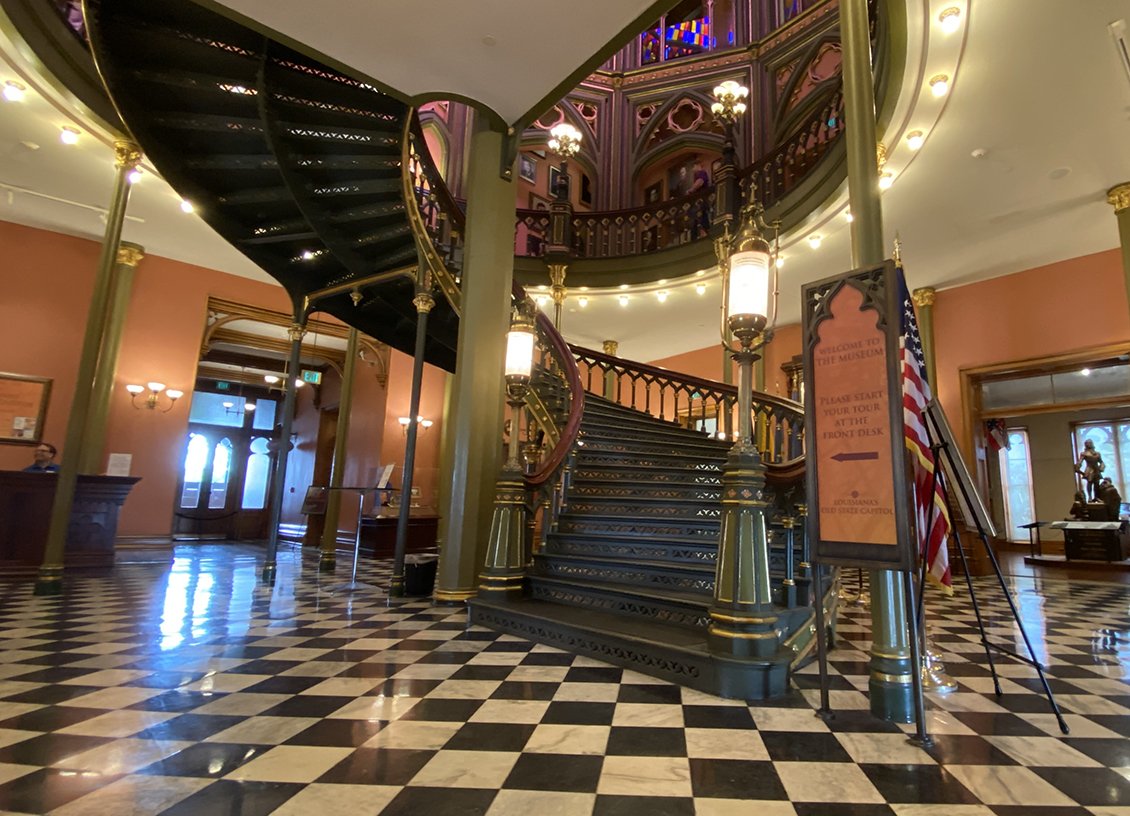 During the Civil War, while occupied by Union troops, a massive fire broke out which gutted the place. 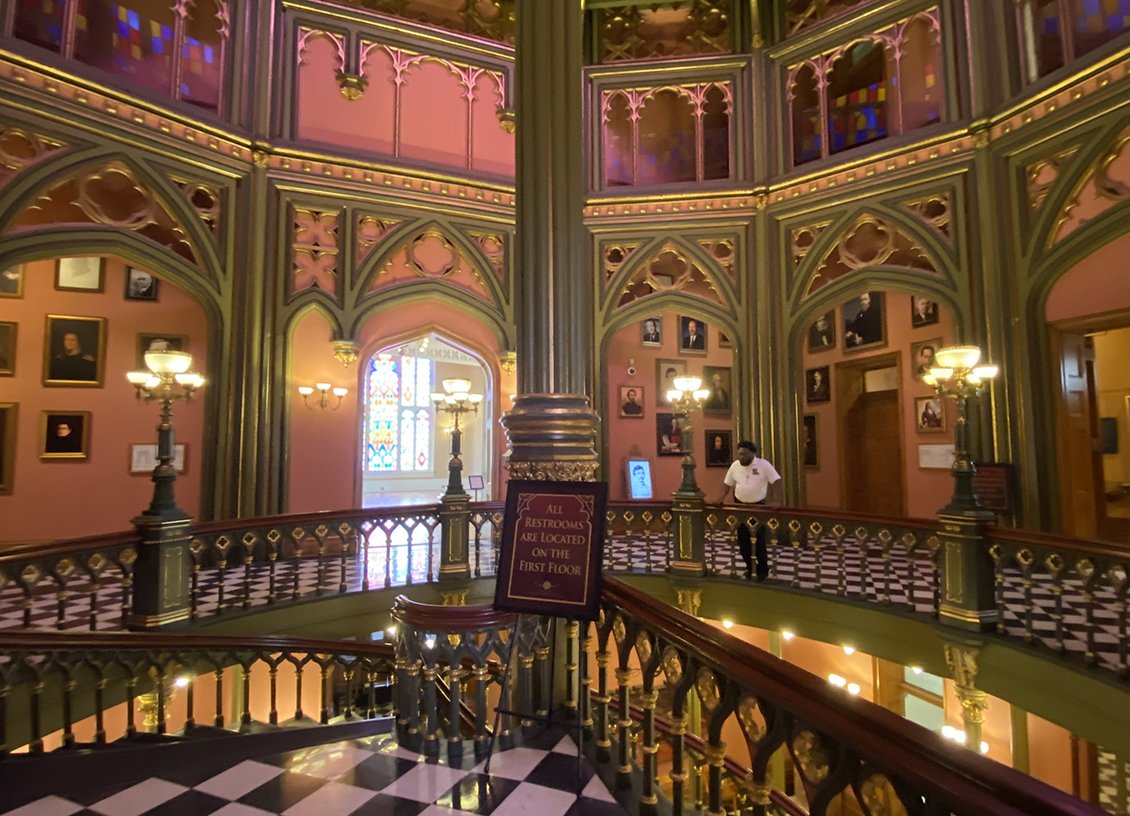 It was restored after the war, but suffered another fire in 1906. The Old State Capitol is now a museum, and serves as the Louisiana Center for Political and Government History. 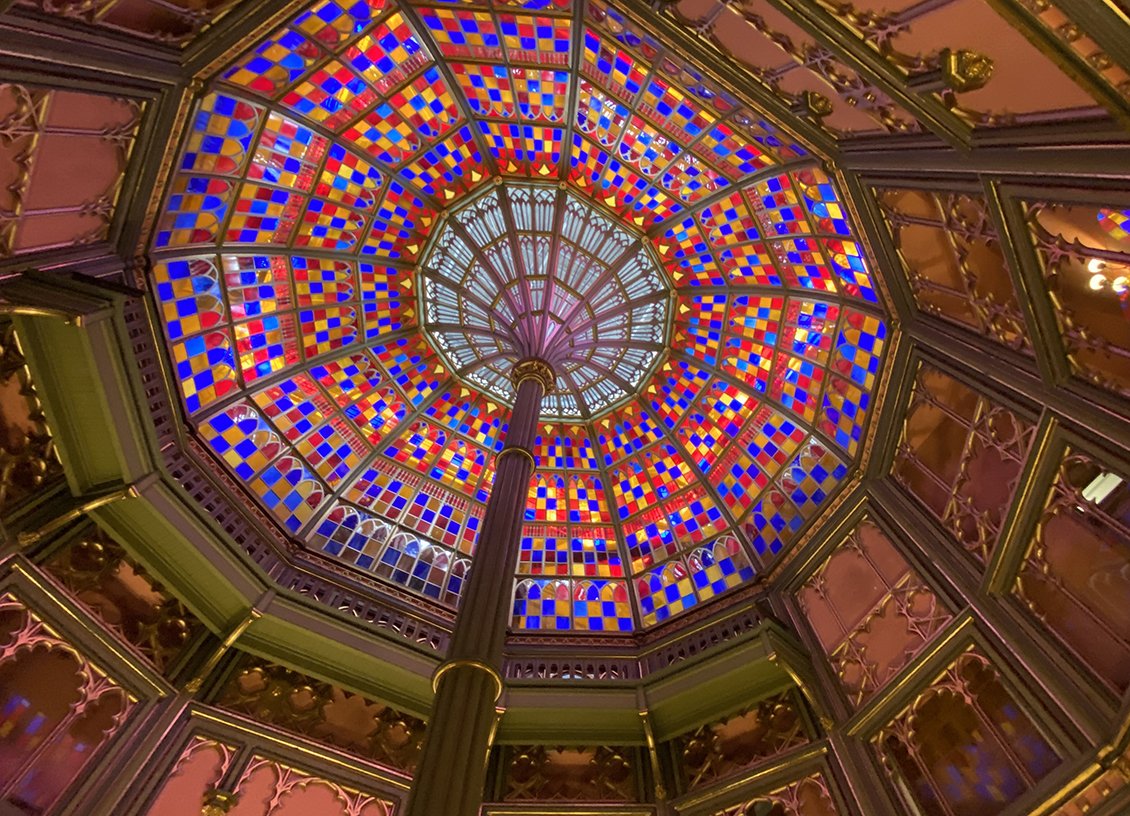 One of the most interesting things about the Old State Capitol is its architecture. It is a mixture of styles, including Gothic Revival, Greek Revival, and Romanesque Revival. 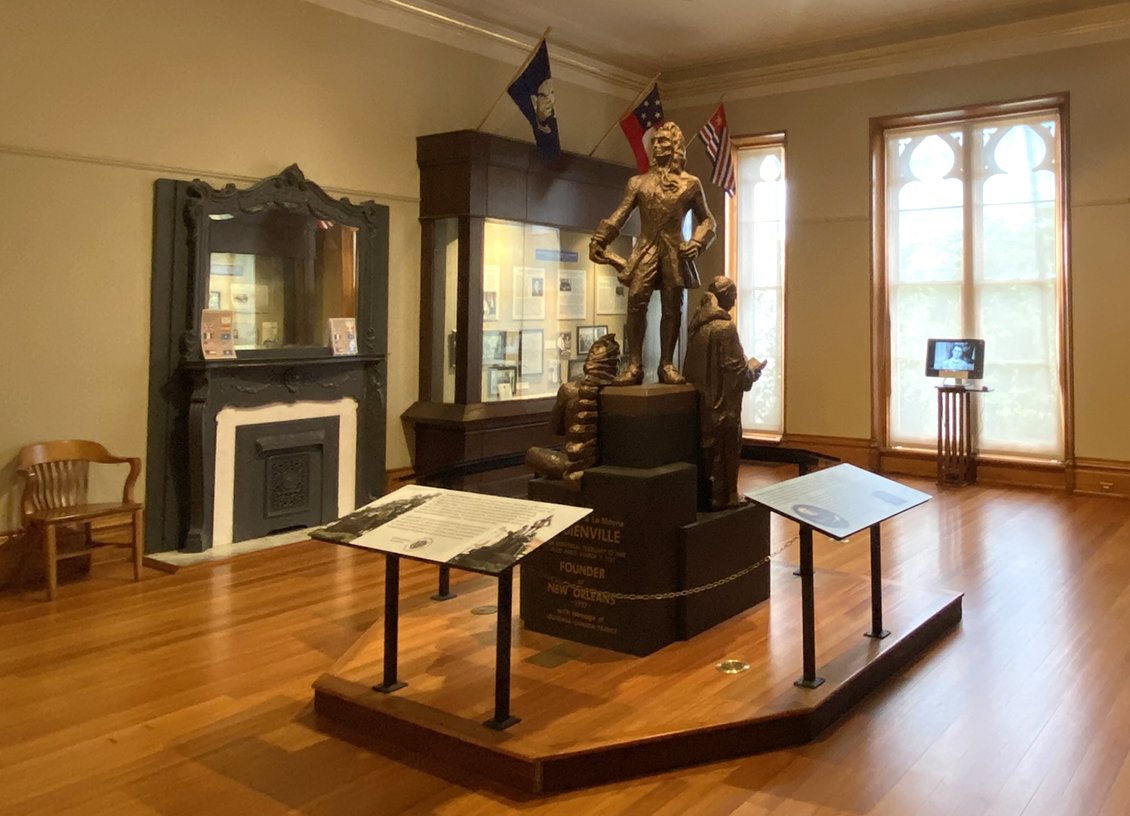 The many artifacts from the building’s storied past, the stained glass windows in the house and senate chambers, and the beautiful stained glass domed ceiling that sits above the central majestic staircase… all make for a very unique and interesting building. 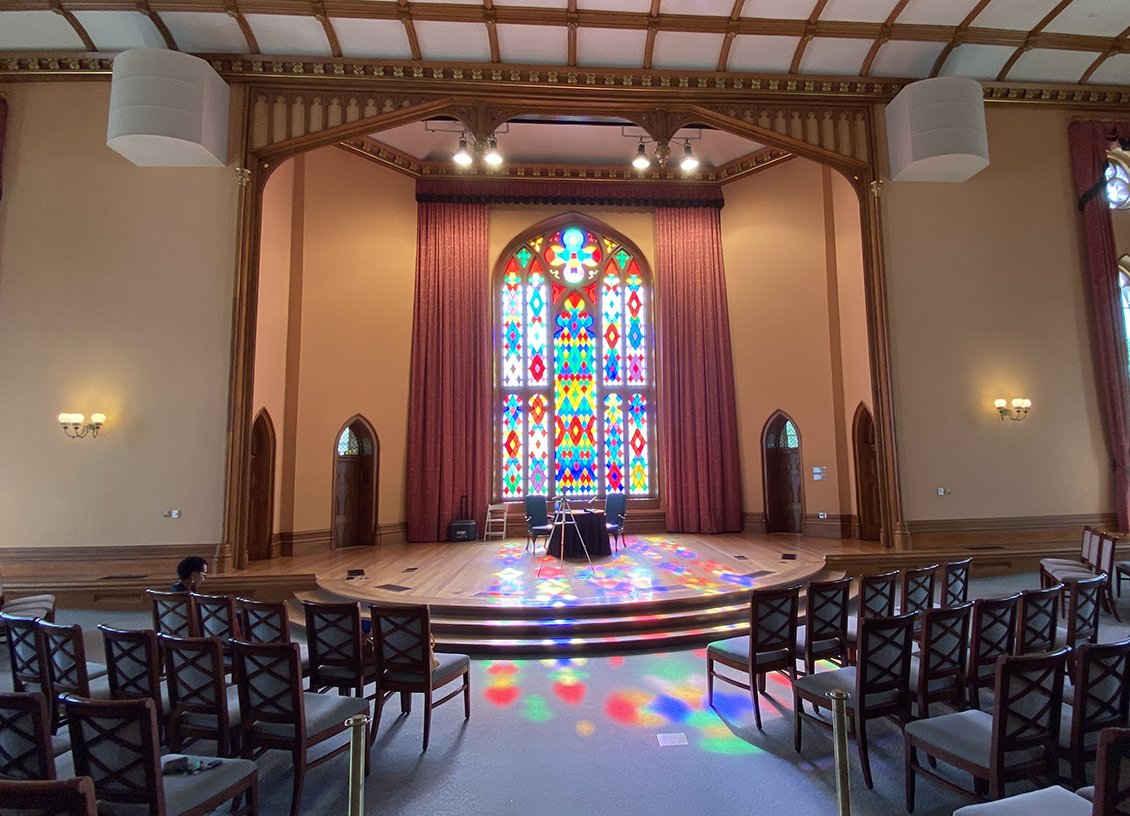 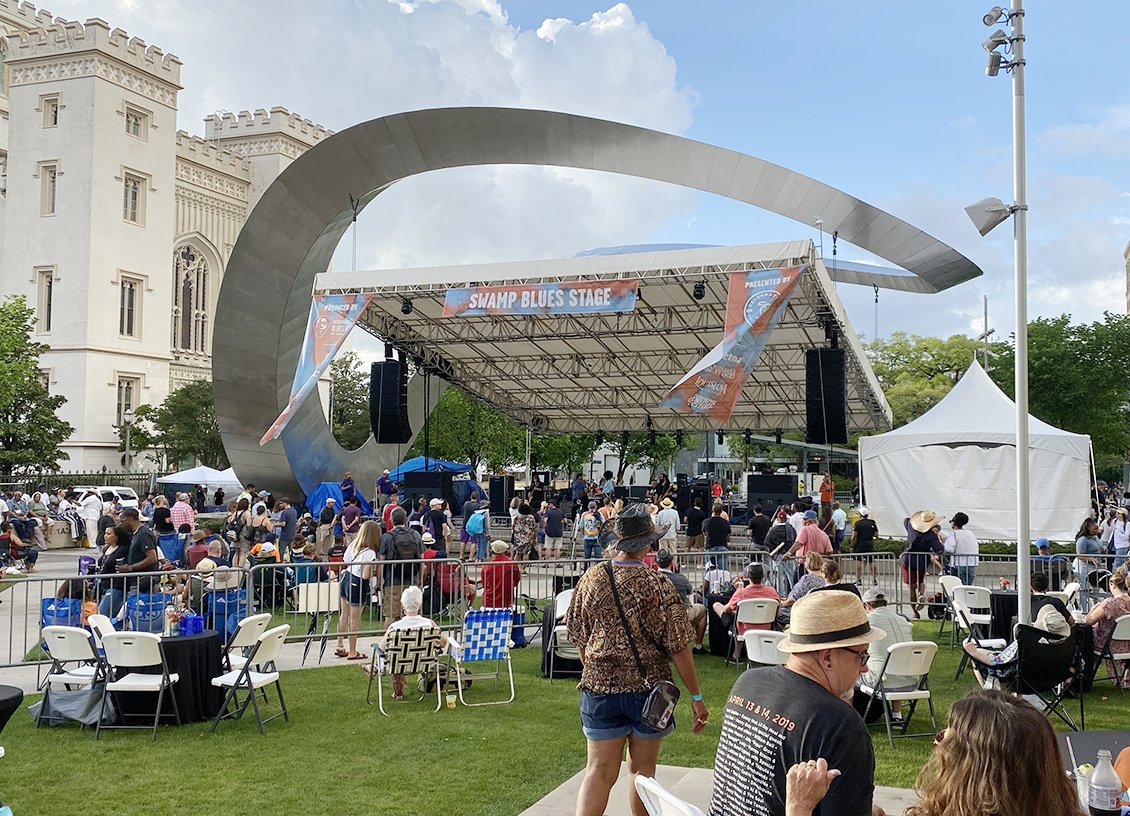 Baton Rouge is the home of swamp blues music. Every April, the city hosts the Baton Rouge Blues Festival to celebrate their contribution to American music. If you’re there in April, you definitely want to check out this free, musical party! I was there this year and got to see Nikki Hill perform. It was fantastic!

If you’re looking for a little more than just music, the festival also features food vendors from all over Louisiana. So whether you’re in the mood for some gumbo or jambalaya, you’ll find it all at the blues festival.

The Baton Rouge Blues Festival in the areas to the north (North Blvd, between St Philip Street and Lafayette Street) and east (Galvez Plaza) of the Old State Capitol building in Baton Rouge, Louisiana. 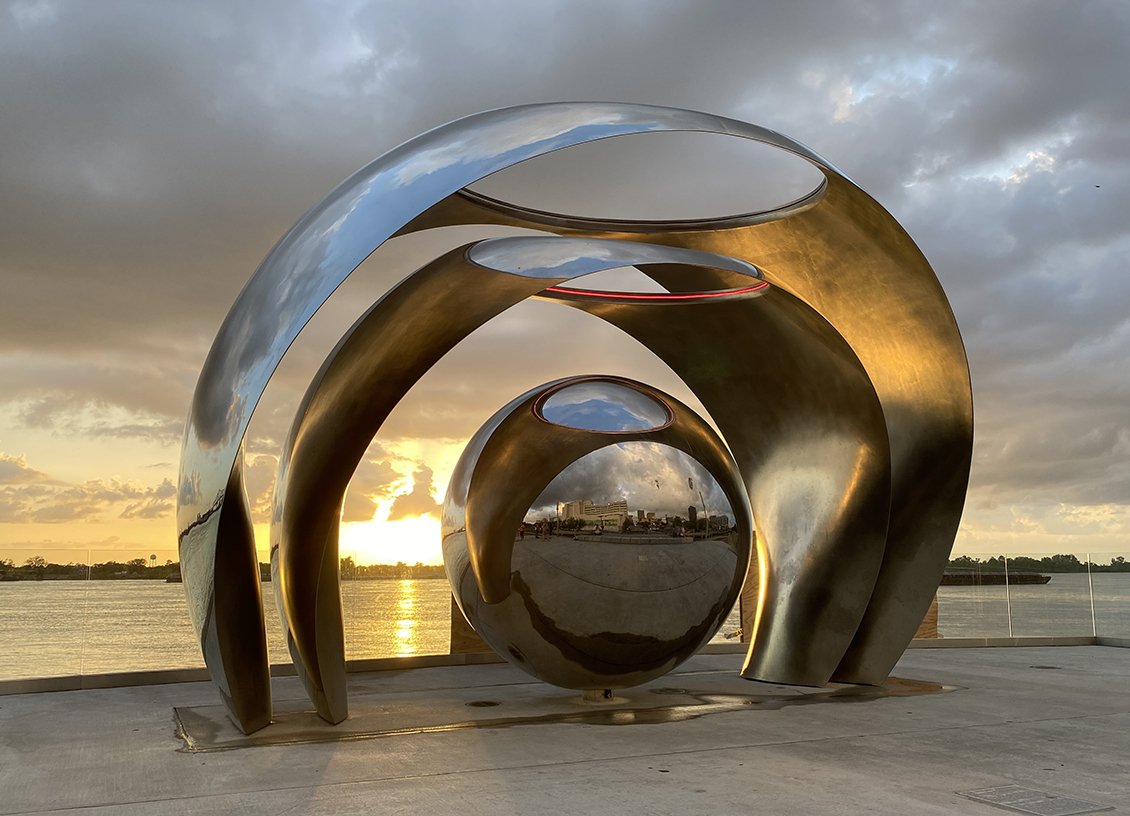 Right on the Mississippi River levee is a new sculpture you simply must see, or better yet, hear, to believe.

The “Sing The River” sculpture was designed by Po Shuy Wang, an artist from California. The reflective silver sculpture is connected to sensors in the Mississippi River and plays music synchronized to the rise and fall of the river water. It lights up at night, but is just as beautiful at sunset.

The Sing the River Sculpture in Baton Rouge is one of those public art pieces that you can’t help but love. Grab aseat by the river’s edge and listen to the mighty river sing!

The Sing the River Sculpture is located at Florida Street and River Road in Baton Rouge, Louisiana.

A post shared by LSU Museum of Art (@lsumoa)

The only dedicated art museum in the city, containing more than 6,500 objects.

From a collection of Chinese jade, to loads of Louisiana art and cultural artifacts, to European and American paintings, sculpture, paper art, and photography.

If you love art, you have to check it out.

The LSU Museum of Art is located at 100 Lafayette Street in Baton Rouge, Louisiana.

If you’re a military history buff, then you have to check out the USS Kidd Destroyer and veterans museum. This museum is dedicated to the memory of the brave men and women who served on the USS KIDD destroyer during World War II.

The Kidd is one of the best preserved WWII era naval destroyers in the world, and one of only four ‘Fletcher class’ destroyers still in its original configuration. it is full of interactive exhibits that will teach you all about life on board a destroyer. You can even explore the engine room, mess hall, and sickbay. The museum is also home to a research library and archives, so you can learn even more about the history of the USS KIDD.

And if you’re feeling adventurous, you can even take a tour of the ship’s bridge! Just be sure to watch out for enemy fire.

The USS KIDD Veterans Museum is a great place to learn about the history of the United States Navy, and see a lot of great artifacts from the period, as well. 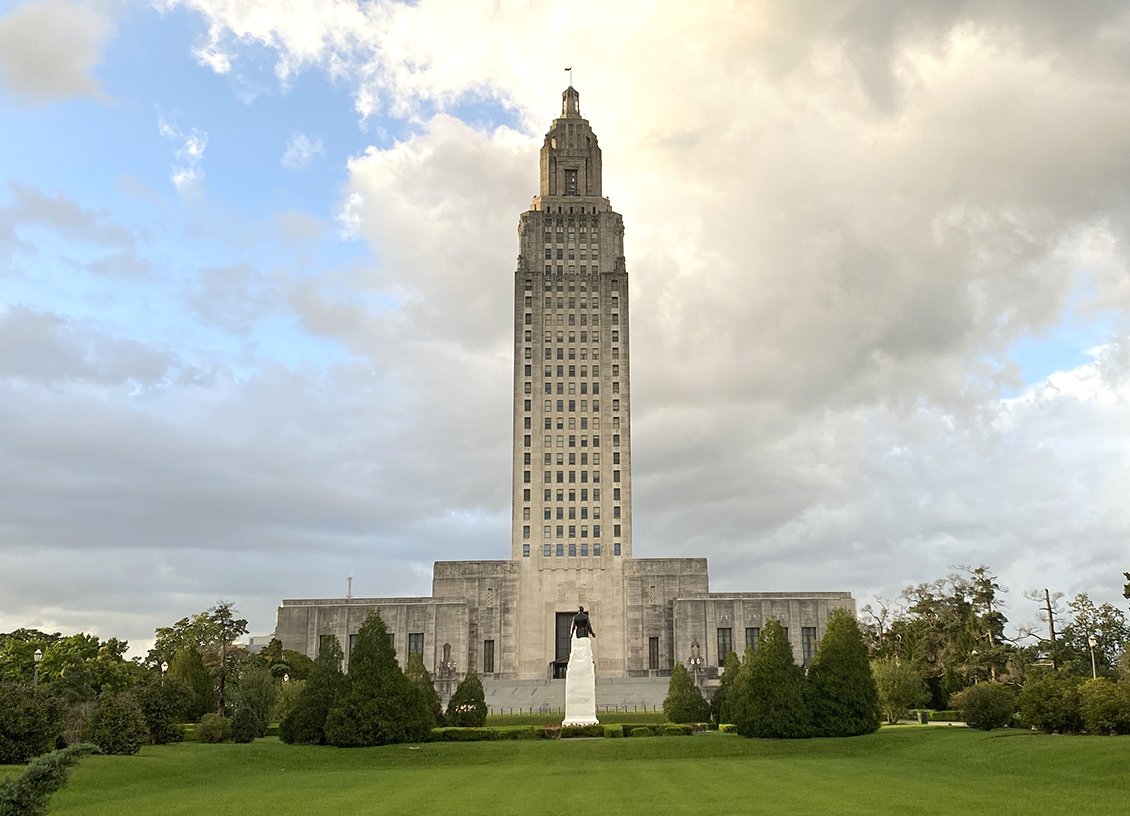 If you’ve seen the original capitol, then you gotta go see the new one!

At 450 feet, it’s the tallest capitol building in the entire country. It sits on 27-acres of lush gardens, and is quite the majestic building. There is an observation deck on the 27th floor (350 feet up) that overlooks the city of Baton Rouge.

Championed by notorious Governor Huey P. Long, the Louisiana State Capitol was completed in 1932. It was also the sight of Long’s assassination in 1935. He is buried on the grounds, and a statue of him facing the Capitol building.

This awesome attraction is free to visit, so be sure to add it to your itinerary.

A post shared by The Old Governor's Mansion (@old_governors_mansion)

No matter where you go in the capitol city, you run into Huey Long and his legacy.

The Old Governor’s Mansion was commissioned by him in 1930 as the “Louisiana White House”. It served as the official residence of the state’s governors until 1963. The mansion is now a museum and the home of the Foundation for Historical Louisiana.

This historic building is full of fascinating stories and interesting artifacts from nine different governors. Tours are available seven days a week, so you can easily fit a visit into your itinerary. You’ll definitely want to take some time to explore this incredible piece of Louisiana history.

The Old Governor’s Mansion is located at 502 North Blvd in Baton Rouge, Louisiana.

If you love the outdoors, then you’ll want to check out this place!

The Bluebonnet Swamp Nature Center is home to all sorts of animals, including bats! You can learn all about these amazing creatures on a guided tour. And if you’re lucky, you might even see one flying around at dusk.

Outside there’s over a mile of paths and walkways wandering through the cypress-tupelo swamp, where you can see everything from snakes, birds, armadillos, otters, and way more!

Well, there you have it… 10 awesome and fun things to experience in the Red Stick! If you plan on visiting Baton Rouge, be sure to put some or all of these activities on your itinerary. You won’t be disappointed!

How Travel Enhances Your Everyday Life

How to Pack for a Summer Holiday